In many schools, ‘climate change is playing catch-up’ 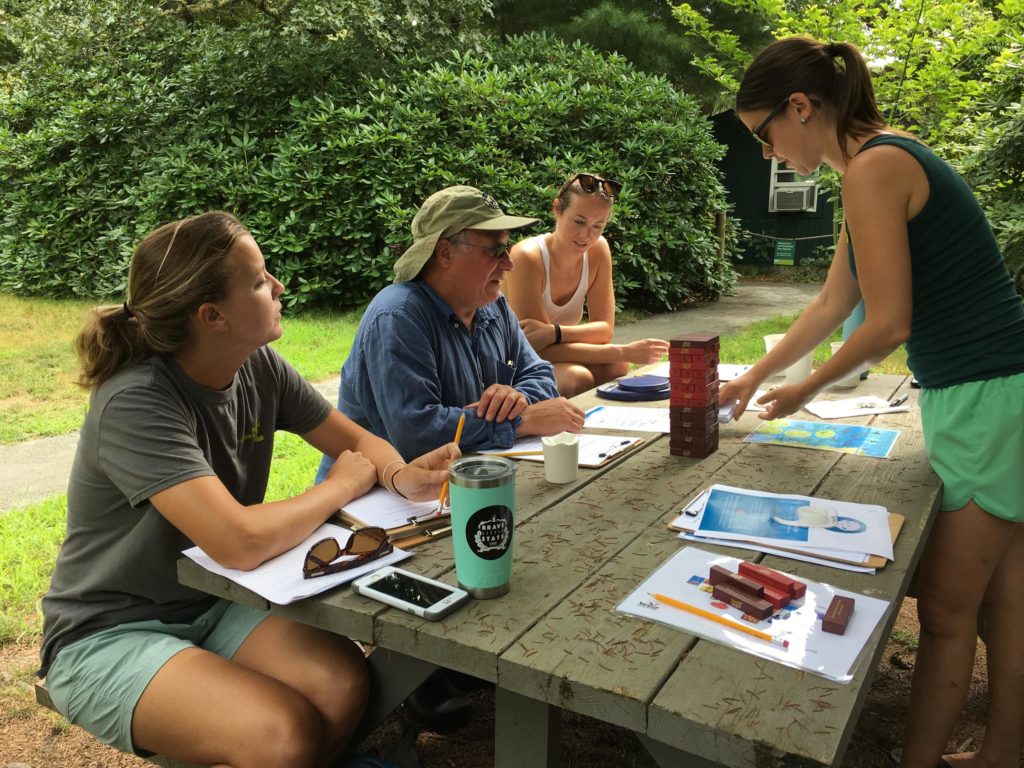 This is the first story in “Teaching the Future,” a three-part series published originally in WCAI.

If the world doesn’t make “rapid” and “unprecedented changes in all aspects of society,” a UN report warned this month, the effects of climate change will be dramatic and far-reaching – and not in some distant future, in the next 20 years. Even now, though, in most schools, climate change is still just starting to make its way into classrooms, and many teachers don’t have the training or the resources they need to teach it.

On a hot sunny day, right in the middle of August, a couple of teachers from Martha’s Vineyard are sitting at picnic tables in the shade at the Cape Poge Wildlife Refuge, writing down observations about different shells that have been sitting in sea water or vinegar, and then smashing them with a hammer, to see how easily they break.

They’re trying out a lesson Shannon Hurley has come up with for middle schoolers, on the connection between climate change and ocean acidification. Hurley runs educational programs for schools across the Vineyard, going into schools and taking classes on field trips, for the Trustees of Reservations, a non-profit that preserves land across Massachusetts.

Last year was the first year the Trustees ran a climate-change specific program, on erosion, for second graders. This is the first year they’re expanding into middle school. They’re able to do that, in part, because climate change is now officially in the state science standards in Massachusetts, as of 2016.

“Oftentimes what we have to do is hit the standards, to make it valuable, time-wise,” said Hurley, adding that now that climate change is part of what teachers have to address in certain grades, particularly in middle school, the Trustees are able to “expand our offerings a lot more.”

For a lot of teachers, “professional development with organizations like the Trustees is the way to continue to grow your base knowledge that you already have,” said Casey Hayward, who teaches fifth and sixth grade at Martha’s Vineyard Public Charter School. She took a day out of her summer vacation to go to Hurley’s workshop on Chappaquiddick. “If we didn’t have the Trustees doing programs like this, we would have to be doing a lot of this on our own.”

Most of what she knows about climate change she has taught herself, Hayward said, by reading articles, listening to podcasts, and watching documentaries.

That’s common, according to Pat Harcourt, who just finished up a study, funded by the National Science Foundation, looking at what works in climate change education. Most teachers, she said, “typically haven’t had specific training in climate change.” One reason for that, is that “it’s still new enough that there aren’t programs in place that are analogous to, say, molecular biology training.”

Nationwide, more than half of teachers have had no formal education on climate change, according to a report from the National Center for Science Education. Not even a single lecture. Very few of those teachers have gone on to get professional development on the issue – just one in five.

That lack of training – more than politics and controversy – is the primary reason climate change is not taught more in schools, Harcourt found. Because of that, and the fact that it’s still a relatively new topic, she said, “climate change is playing catch up.”

Kate Skehill, a third grade teacher at East Falmouth Elementary School, finds herself trying to catch up all the time. Even though climate change does not explicitly appear in the third grade standards – “it’s actually spelled out that climate change knowledge and understanding is not really expected at this time,” Skehill said – she and her teaching partners in third grade have found places where they can fit it in to the things they do have to teach, like weather. It’s a huge challenge, though, for her to find resources about climate change that are on a third grade level.

“I have to take whatever the science is and sort of translate it to a third grade point of view,” Skehill said. “So if there were resources out there that already did that, that would be helpful.”

There’s that challenge, of finding resources; there’s the fact that climate change is still a relatively new subject; and there’s also the fact that there’s never enough time.

Still, she thinks it’s critical to fit it in where she can, she said, because “it’s important for these kids to understand that what’s happening with our climate is real, and that they’re going to be the ones in charge of coming up with the ideas and solutions to our very challenging problems.”

For all the obstacles to getting more – and more robust – climate change education into classrooms, Shannon Hurley, of the Trustees, said the teachers and students she works with on the Vineyard have one big thing going for them, when it comes to learning about climate change.

That’s true on the Cape, too. Because it’s visible all around – in the eroding dunes, in the bleached shells. They just have to learn where to look.