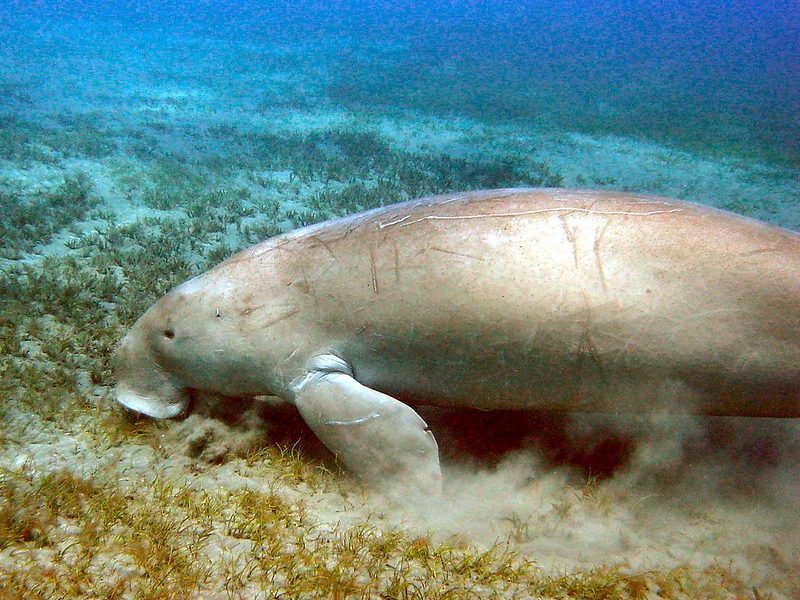 Kochi: Last week, Tamil Nadu notified India’s first ever dugong conservation reserve in the Palk Bay area of the Gulf of Mannar, which lies between Sri Lanka and the southern tip of India.

Dugongs are marine mammals that graze on seagrass meadows in the ocean. According to marine biologists, the move to declare the dugong reserve – though ‘political’ – was long overdue. Notifying such conservation reserves is important because they uphold local communities as important stakeholders, they said.

Mermaids in the sea

Dugongs (Dugong dugon) – thought to have inspired myths of mermaids among seafarers of yore – are marine mammals that live in small groups in shallow waters. They’re also called sea cows: a term that reflects the ecological role they play, being oceanic herbivores that chomp on seagrass in underwater meadows. They can grow up to 3.5 meters long, and weigh around 300 kg.

But though the animals are distributed across many parts of the Indo-Pacific, they are listed as Vulnerable in the IUCN Red List of Threatened Species due to their decreasing population worldwide. The species is already extinct in China. India’s dugong population too is declining: there are just around 200 dugongs left, as per some estimates. In Indian waters, you can spot dugongs near the Andaman and Nicobar Islands and off the coast of Tamil Nadu in the Gulf of Mannar and Palk Bay.

Here, in the Palk Bay, within a small, approximately 450 square-kilometre patch, is where the country’s first dugong conservation reserve will come up. In an order published in the state gazette on September 21, Tamil Nadu notified the Dugong Conservation Reserve and delineated the boundaries of the area which will come up off the coastal districts of Thanjavur and Pudukottai.

“We have conceptualised this species-focused conservation reserve with a view to protect this critically endangered marine mammal and its vital seagrass habitats with support from local coastal communities mainly comprising fishermen and their families,” Shekhar Kumar Niraj told The Wire. Niraj was Principal Chief Conservator of Forests, Tamil Nadu, when the decision to designate the dugong conservation reserve was taken. “In [the] long run, the conservation reserve will provide vital support to TN’s coastal environmental security.”

According to the order in the gazette, protecting dugongs and seagrass beds in this area will also help in the “breeding of commercially valuable finfishes, crabs and shrimps, thereby benefiting thousands of small scale and marginal fishermen, who depend on fishery productivity for their daily livelihood in the nearshore areas”.

The move to finally notify a dugong conservation reserve comes more than a year after Tamil Nadu announced its decision to do so. The notification was long due and talks to designate such a reserve have been in the pipeline for three years, said Vardhan Patankar, independent marine biologist who has studied dugongs in the Andaman and Nicobar Islands. The notification of the reserve assumes even more significance because of the several threats that endanger dugongs in these waters, despite the species being listed in Schedule I of the Wildlife Protection Act 1972 (which gives it protection on par with that of tigers in India).

Gill nets are one of them. Being mammals, dugongs have to surface every three or four minutes to breathe. However, fishermen often set out gill nets at night in the shallow waters. Surfacing dugongs get tangled in the nets and die. Bill nets are one of the biggest causes of mortality of dugongs in the area, said Patankar.

The new conservation reserve declared for dugongs is a heavily fished area, he added. However, the state government has conducted extensive consultations with local communities and fisherfolk.

“There is buy-in as far as fishers are concerned,” Patankar told The Wire. “Because it is a community-based conservation reserve, people can still use the area for fishing even if they have to take measures to protect dugongs from fishing-related mortality.”

In such light, the designation of a conservation reserve – which sees people as important stakeholders and responsible for the conservation of dugongs – is a good thing, as opposed to declaring the area as a Marine Protected Area which often restricts fishing activities and thus embitters local communities, Patankar added.

According to him, the newly-declared dugong conservation reserve will also count as an OECM – or Other Effective area-based Conservation Measure. OECMs do not come under the protected area network (unlike wildlife sanctuaries or national parks) but focus on in-situ conservation of biodiversity through sustained, long-term management keeping in mind locally-relevant aspects such as socio-economic and cultural factors too. OECMs are part of the ‘30×30’ target under the Convention of Biological Diversity’s post-2020 global biodiversity framework, which India is also signatory to. The ‘30×30’ target aims to protect and conserve 30% of the world’s terrestrial, freshwater, coastal and marine ecosystems.

Thus the dugong conservation reserve is in a sense a “political move” that “looks good on paper” and adds to India’s climate change mitigation measures as well, Patankar commented. However, it is still a crucial step for dugong conservation, he added.