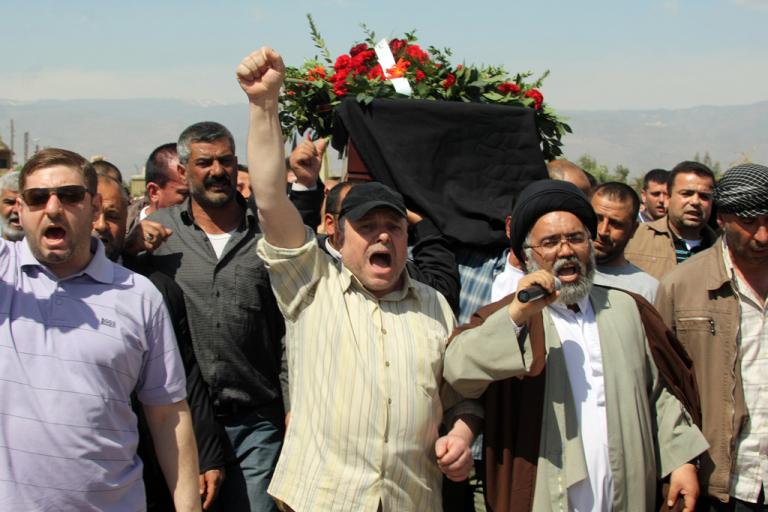 Mourners shout slogans as they carry the coffin of a 13-year old Lebanese child who was killed when the border town of Qasr, in the Hermel border region, came under artillery shell fire from Syrian territory, during his funeral procession in the village of Hosh Sayyed Ali, on the Syrian-Lebanese border, on April 14, 2013. Lebanese President Michel Sleiman issued a statement after the incident in Qasr, condemning the fire and adding that such spillover "has only led to the deaths of innocent Lebanese who have nothing to do with the ongoing conflict taking place outside their country." - ((-AFP/Getty Images) )

HERMEL, Lebanon — The strategic city of Qusayr in Syria has fallen to the Syrian Army, and the shock waves are still being felt in Lebanon, where increased fighting vividly indicates how Syria’s 27-month-old civil war has destabilized the entire region.

Hezbollah sent fighters to Qusayr in a move that caused major controversy in Lebanon. And though the militant organization played an important role in defeating the Syrian rebels in Qusayr, it admitted how problematic the fighting had been over the past month.

“The Qusayr battle was very difficult,” Hezbollah spokesperson Haj Ghassan told GroundTruth in the eastern Lebanese city of Hermel, just a few miles from Qusayr. “The rebels had built many tunnels and had a lot of reinforcements.”

Hezbollah considers Qusayr to be a major victory against “Sunni Islamic extremists,” the term the Shia group uses to describe the rebels fighting against Bashar al-Assad.

But for the first time they admitted the high cost of the win.

“It’s almost complete destruction of Qusayr caused by both sides,” said Ghassan. He admitted that whenever the Syrian army came under fire from rebels, they retaliated with tanks and heavy weapons. “The Syrian Army destroyed any place that shots came from. Now the Syrian government has to rebuild.”

The city of Hermel has also suffered. Syrian rebels fired some 70 rockets into civilian neighborhoods in retaliation for Hezbollah’s participation in the fighting, according to Ghassan.

Over the past few weeks, intense fighting also broke out in the northern Lebanese city of Tripoli, as pro- and anti-Assad factions fought one another with AK-47s, rocket propelled grenades and mortars. So far 37 have died and over 300 were wounded in Tripoli.

The Lebanese clashes stem from a deadly brew of poverty, historic political differences, geopolitics, and a jolt of deadly fighting in Syria. While all sides deny that they are motivated by religious animosity, the political fight has intensified divisions among three of Lebanon’s religious groups: Sunni, Shia and Alawite.

At least several thousand Lebanese Sunnis are fighting with rebels in Syria, while an estimated 4,000 or more Hezbollah Shia fight in Syria alongside Bashar al Assad’s troops, according to Elie El-Hindy, chair of the Political Science Department at Notre Dame University outside Beirut.

“It is becoming more and more a religious-driven conflict,” he told GroundTruth.

Hezbollah poured huge amounts of manpower and resources into the battle for Qusayr. Their fighters initially expected to take the city in a few days. But the battle took a month, largely because Hezbollah was fighting on unfamiliar turf while the Syrian rebels had a home-front advantage.

Nevertheless, the combined Syrian Army and Hezbollah irregulars overwhelmed the outgunned and politically divided rebels. Qusayr is a clear political as well as military victory for the pro-Assad forces. It bolsters their argument the fight against the rebels is part of a “resistance front” against outside forces.

Hezbollah argues that the Syrian fight is not a legitimate uprising against a dictator, but part of an effort by the US and Israel to dominate the region. The rebels are not Syrian but mostly ultra-conservative Salafist Muslims, it claims.

The Syrian rebels, in league with the US and Israel, want to stop the alliance between the Shia crescent countries of “Iran, Iraq and Lebanon by hitting Syria,” he said. If the uprising succeeds, he argued, “It would cut this connection to the resistance against Israel.”

In short, Hezbollah leaders believe they are stopping Israeli allies in Syria so they don’t have to fight them in Lebanon.

Bassem Shabb, a member of parliament from the anti-Hezbollah Future Party, said that sounds like the “George Bush doctrine. If we don’t fight them in Qusayr, they’re going to come over here.”

Strategically, Qusayr “doesn’t make much difference,” said Professor El-Hindy. The retaking of the city may cut off some roads for smuggling Lebanese Sunni fighters into Syria, but other routes remain. “So far no party has made a breakthrough” in the overall fighting, he said.

El-Hindy said Hezbollah’s intervention may weaken its political support in the long run. Hezbollah was widely admired for its fierce fight against the 22-year Israeli occupation of southern Lebanon that ended in 2000. But Hezbollah is now seen as a group that kills fellow Muslims on foreign soil, according to Prof. El-Hindy.

Politically, the battle of Qusayr and Hezbollah’s continued fighting around Damascus has alienated many Lebanese, who had already been against Assad.

According to a Pew Poll, 59 percent of Lebanese oppose Assad, including a majority of Christians and 92 percent of Sunnis.

Even a close political ally said Hezbollah may have been weakened by the intervention. “Hezbollah is in survival mode, not thinking politics,” said Alain Aoun, a Christian member of parliament from the Change and Reform bloc, which is politically aligned with Hezbollah.

Another ally, however, argued that Hezbollah retains strong support from its political base. Indeed, the Pew poll showed 91 percent of Shia support Assad.

Talal Hatoum, a spokesperson for Amal, a Lebanese Shia political party closely allied with Hezbollah, told GroundTruth that anti-Hezbollah parties are wrongly declaring this a religious conflict between Sunni and Shia.

Two movements “are fighting, not two religions,” he said. “One wants to end the resistance.” The other wants to “surrender and not fight Israel.”

The Syria spillover has also impacted the city of Tripoli, Lebanon, where deadly fighting has intensified, appropriately enough, on Syria Street.

Syria Street in Tripoli has become the dividing line between Sunni supporters of Syrian rebels and Alawite supporters of Assad. The political and religious differences have intensified over the past few days. A loose-knit alliance of Sunni, pro-rebel fighters in the Bab al-Tabbaneh district hunker down on Syria Street behind makeshift bunkers made of large truck tires filled with sand.

The narrow streets of the main boulevard have heavy tarpaulins strung across to shield the view of snipers. The Sunni militants shoot at both opposition gunmen and Alawite civilians in a hillside neighborhood above them.

Tripoli has a population of 500,000, the country’s second largest city. Sunnis make up about 80 percent of residents and Alawites only 7.5 percent. Alawites are a split-off of Shia Islam but are mostly secular. They closely ally with the Syrian government, which is dominated by Alawites.

Over half of Tripoli’s residents are classified as poor, with 67 percent of Sunnis in Bab al-Tabbaneh living below the poverty line. Twenty percent of young men in both communities are unemployed. Slums once inhabited by Lebanese poor are now flooded with Sunni Syrian refugees desperate to find work.

Gunmen can earn much more for carrying a rifle than doing manual labor.

Prior to the Lebanese civil war of the 1970s, Sunnis and Alawites lived in mixed neighborhoods in Tripoli. Alawites historically faced intense discrimination. They had a hard time getting government jobs and didn’t have representation in parliament as did other religious and ethnic groups. That didn’t change until after 1990 when Alawites got two parliamentary seats.

Many residents date the current animosity to those years. In December 1986, when Syrian troops occupied Lebanon, Islamist militants killed 12 Syrian soldiers. The Syrian military brutally retaliated. With help from the mainly Alawite ADP, the Syrians targeted Sunni civilians in order to intimidate the population. Amnesty International reported that at least 200 civilians were killed with hundreds missing. Sunnis claim as many as 800 dead.

For Sunnis, the massacre might as well have happened yesterday.

“The Alawites participated in the massacre,” said Abu al Bara, the nom de guerre of a Sunni commander who was interviewed by GroundTruth. “That’s been an open wound ever since.”

Bara commands some 30 fighters and calls himself a Salafist, a loosely organized, ultra-conservative Sunni Muslim political movement. For Bara and his followers, the enemy is not only the armed Alawites but also their civilian supporters.

They should “all go to the devil,” said Abu Wadih, one of Bara’s fighters. When asked for clarification, he said, “they should all die.”

Such extremist groups are relatively new in Lebanon. The Salafists want to impose a strict interpretation of Islamic Sharia law, restrict the rights of women and have no tolerance for other religions.

But in both Lebanon and Syria, they are seen as militant fighters and draw increasing support. In March over 70 traditional leaders and imams met in Beirut, aiming to form the country’s first nationwide Salafist movement, the largest such group ever to gather in Lebanon.

And like Syria, the armed militias have their outside benefactors. The ADP receives arms and money from Hezbollah and Syria. Qatar and Saudi Arabia aid the Salafi militias.

The warring Lebanese factions express worry about the long-term impact of the Syrian war.

Ali Fodda, one of the top ADP leaders, said the war may shift the delicate religious balance of the country. He noted that most of the almost half million UN registered Syrian refugees in Lebanon are Sunni. “Those refugees might end up staying in Lebanon,” he said. “This will affect Lebanon demographically.”

If they do stay, it will make Alawites and Christians an even smaller percentage of Lebanon’s population.

Fodda said he would like to see a ceasefire in Tripoli and worried that the violence in Syria will spread even further. “We should agree to have differences, but we should keep our country from the events in Syria,” he said.

Some political observers believe that the fighting in Tripoli and the clashes near Hermel are temporary. Hussein al Husseini, a former head of the Lebanese parliament during the civil war, said the current fighting is “very painful, but it’s localized.”

The fighting hasn’t spread because the outside countries financing it are preoccupied with war in Syria, he said. “It’s not worth putting in much money to Lebanon,” he said with a chuckle.

Others are more worried. Bassem Shabb of the Future bloc said it will be difficult to have a lasting peace in Lebanon as long as the Syrian war continues.

“The two parties in Tripoli can’t negotiate a solution; they can negotiate a ceasefire,” he said. “Their problems are not in Tripoli.”

Professor Al-Hindy said the intensified religious dynamic has made reaching a political settlement even more difficult. The Salafists and Hezbollah both promise to wage jihad against the other, he said. The leaders talk of the political struggle, he said, but for “an individual fighter, it’s a holy war.”

Hermel’s vice mayor Blaybel was more sanguine. “I think Lebanon will stay the way it is,” he said. “There will be no war, no peace.”