The Syrian Refugee Crisis: How Did We Get Here? 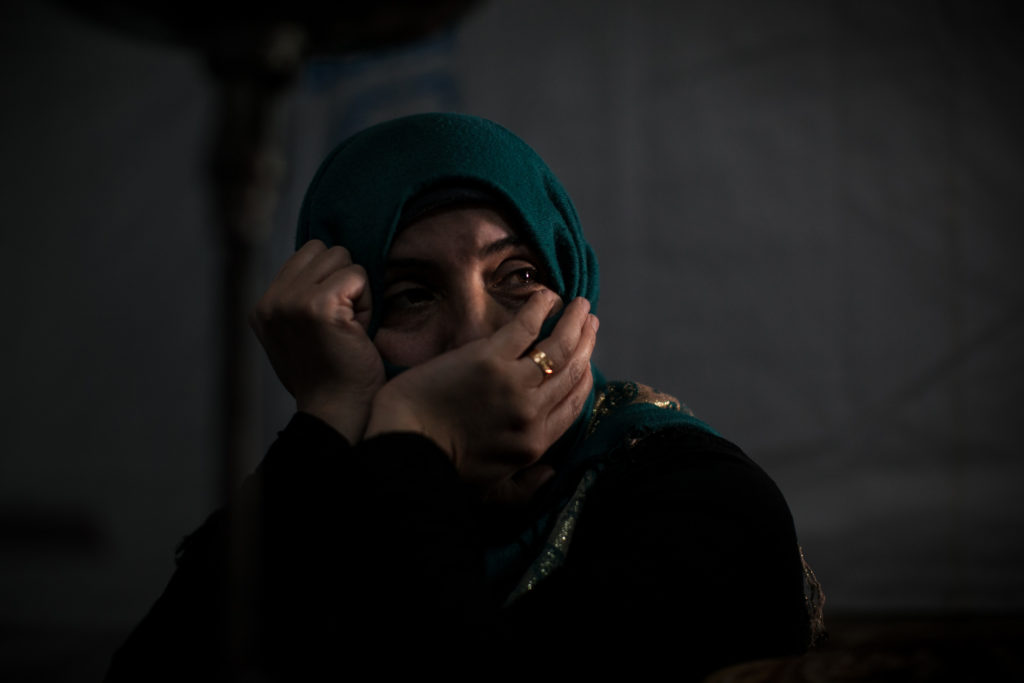 Amina, the mother of a 13-year-old child bride named Batoul, says she has given up hope for a better life. She is pictured in the Bar Elias refugee camp in Lebanon .(Photo by Christopher Lee/GroundTruth)

It was five years ago this month that the war in Syria began and the first wave of refugees began trickling across the border into neighboring Turkey, Jordan and Lebanon, believing they would be displaced for just a few months.

Today, a tide of 4 million refugees who have fled the war in Syria represents a migration of Biblical proportions.

While last month’s tenuous agreement for the “cessation of violence” has largely held, observers of the war fear it will not end any time soon and that the refugee crisis will continue to worsen over time.

Diplomats, scholars, military analysts, aid workers and refugees themselves say on this fifth anniversary of the war that it’s important to look back on the uprising and the ensuing war that has killed more than 300,000 people to remember how this horrific chapter of modern history began. Even on the heels of a tenuous ceasefire announced at the end of February, they fear the killing and suffering is not going to end anytime soon.

How did we get here?

It was March 15, 2011 when mass demonstrations began in Damascus and Aleppo, set in motion by a wave of uprisings in the Middle East that came to be known as the Arab Spring. But it was a week earlier in Daraa, which is widely considered the cradle of Syria’s uprising against Assad, unrest began after 15 schoolboys were arrested for spray painting anti-regime slogans onto a wall and a grain silo. They were beaten and tortured in an interrogation room, their fingernails pulled out.

As the boys remained in jail, nonviolent demonstrations were being met by an oppressive regime that deployed troops and tanks in the street to crush the pro-democracy movement in its infancy. It was hard to see exactly where this was headed, and what lengths the Syrian regime would go to hold on to power.

As the civilian death toll began to mount in the fall of 2011 and into 2012, opposition leaders were thrown into prisons and refugees began to flow across the border. Bashar Al-Assad’s brutal crackdown on protesters, who he characterized as “terrorists” plotting a Sunni extremist campaign, was eventually met by an armed opposition led by defectors from the army protecting their homes and villages.

In August 2012, US President Barack Obama was asked whether he thought the US would intervene militarily in Syria.

“We have been very clear to the Assad regime, but also to other players on the ground, that a red line for us is we start seeing a whole bunch of chemical weapons moving around or being utilized,” President Obama said. “That would change my calculus. That would change my equation.”

In June 2013, the White House announced that the Assad regime had crossed the “red line” by using chemical weapons, but with very low public support for military intervention, Obama ultimately decided against an invasion.

By 2013, the refugees had become a human tide unprecedented in modern history that has flooded Turkey, Jordan and Lebanon as hundreds of thousands of civilians fled for their lives. What began as a largely secular protest movement against the regime had become a protracted and vicious campaign by the Syrian military that helped create a sectarian war.

‘What began as a largely secular protest movement against the regime had become a protracted and vicious campaign by the Syrian military that helped create a sectarian war.’

“This is not what happens after a tsunami, after a hurricane. This is a manmade disaster,” said Hussam Ayloush, executive director of the Council on American-Islamic Relations’ Los Angeles office, speaking at a conference on the refugee crisis at the University of Southern California last month. “This is the work of a butcher, Assad, who was willing to see half the population as refugees and hundreds of thousands killed.”

The conference, at USC’s Annenberg School for Communication & Journalism, explored the role of religion within the war that birthed the refugee crisis.

“It is in our interest to help these refugees,” said Ayloush. “If these children are not educated and not making money, who will prey on them? ISIS.”

The conflict is now a full-blown proxy war in the region pitting the two main streams of Islam, the Sunni and the Shia against each other. It has drawn in Sunni-majority regional powers like Saudi Arabia and the Shia-majority theocracy of Iran as well. The US is backing Saudi Arabia and the opposition while Russia is backing Iran and the Assad regime.

“The narrative of an ancient conflict, Sunni and Shia that dates back a millennia, is not true,” said Nader Hashemi, associate professor at the Josef Korbel School of International Studies at the University of Denver. “It started five years ago with the Arab Spring,”

The fractious Syrian opposition is now in tatters and in some places has metastasized into a cancerous force of Islamist militias and death cults like the self-proclaimed Islamic State.

“In the start, it was never sectarian,” said Ayloush of the Council on American-Islamic Relations. “It was very secular. Many prominent Christians, Sunni, Druze, Alawites. The sectarian groups funded by Iran started taking a religious tone, unfortunately. Then Al Qaeda started taking root in the name of defending the Sunnis, then the emergence of ISIS.”

There are now estimates that some 8 million Syrians are internally displaced by the war in addition to the 4 million refugees who have fled the country. Last summer, this flood of refugees broke its banks and more than one million of those refugees began dangerous and often deadly journeys to make their way to Europe by walking through Turkey into the Balkan states or packing into inflatable boats to cross the South Aegean Sea. They are desperate to seek political asylum in Europe amid fear that the war will not end anytime soon.

European leaders have been wracked by disagreement about how to respond to the crisis. More than 1 million refugees now live in Germany and more than 2 million in Turkey. German Chancellor Angela Merkel and Turkish President Recep Erdogan not reached agreement on a plan stop the flow of refugees into Europe, and the European Union has been even more fractured.

‘The only real solution is to end the butcher of Syria.’

“This is the biggest challenge for Germany since reunification [of East Germany and West Germany],” said Stefan Biedermann, deputy consul general of the German Embassy in Los Angeles, speaking at the refugee conference. “It has brought out some of the best and the worst that we have.”

The challenges for societies working to resettle refugees are legion. Funding for services remains insufficient, jobs are scarce and integrating traumatized, desperate, restless people is made more difficult by political groups and leaders in all regions whipping up anti-refugee sentiment. In Europe and the US, that sentiment is usually laden with Islamophobic vitriol.

Mosques have been attacked, refugees beaten and Muslims targeted by political leaders — as with Republican presidential candidate Donald Trump’s call for Muslims to be banned from entering the US as part of his campaign.

After the attacks in Paris in November, 31 US governors said Syrian refugees were not welcome in their states. Reports that one of the Paris attackers had traveled into Europe along the migrant route through Greece opened the door for a widely reported connection between refugees and ISIS. It pushed fear of Islamic extremism back into the hearts of many who had empathized with suffering migrants, inspired by the iconic photo of three-year-old Alan Kurdi’s body upon a Turkish beach.

A glimmer of hope has come with a new “cessation of hostilities,” which Secretary of State John Kerry brokered with the international community. But there are very few who believe the tenuous ceasefire will hold. And refugees, aid workers and advocates say the chance of them returning to their country, which has in many parts been reduced to rubble, could still be many years away.

“The only real solution is to end the butcher of Syria,” Ayloush said. “Until that happens, let’s make sure there are safe havens, humanitarian zones where no airplanes would be allowed to bombard. When people are engaged with such murderous behavior, the international community has a moral responsibility to act.”

This story was reported from Jordan and Lebanon as part of a GroundTruth reporting fellowship supported in part by the international aid agency World Vision. And it was reported from Los Angeles at a conference on refugees titled, “Understanding Syria’s Refugee Crisis.” The event was co-hosted by GroundTruth and the Knight Chair in Media and Religion at the University of Southern California’s Annenberg School for Communication and Journalism, with major support from the Henry Luce Foundation.