What do the Supreme Court’s voting rights rulings portend for the election? 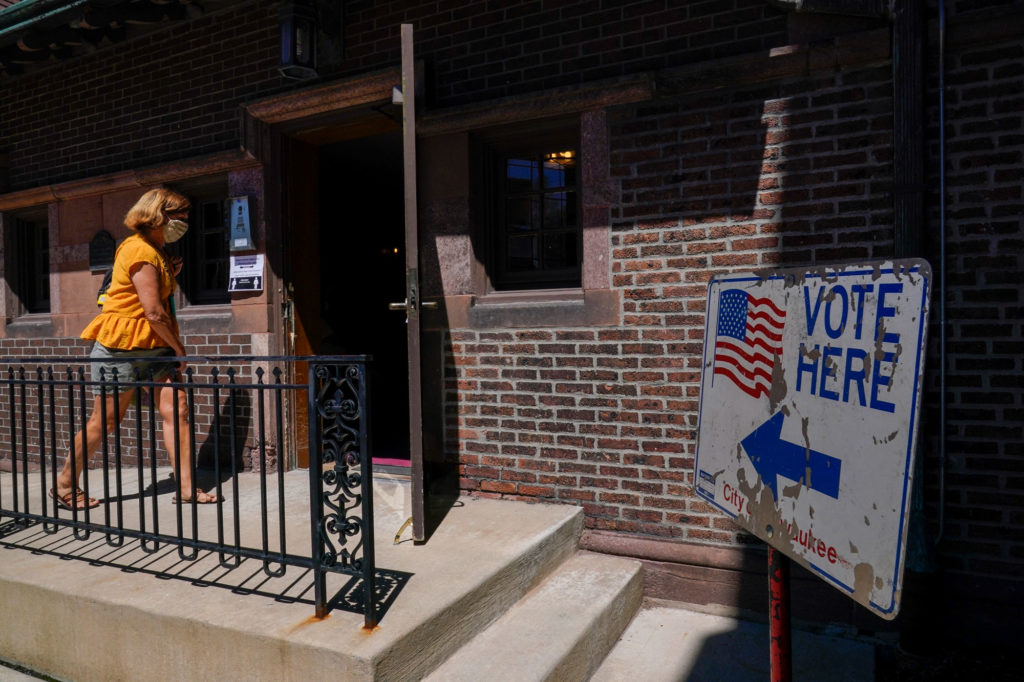 In a 5-3 ruling, The U.S. Supreme Court rejected an effort to extend the counting of Wisconsin's mail-in ballots past Election Day. (Photo by AP/Morry Gash File)

Supreme Court decisions in Wisconsin, Pennsylvania and North Carolina this week demonstrated justices’ ability to either check accelerating conservative efforts to suppress the vote in America — or to stop mail-in ballots from being counted and perhaps tip swing states in this presidential election.

The 2020 election is already one of the most litigious in American history, with over 300 active election-related lawsuits filed before ballots have even been counted. The pandemic, coupled with renewed democratic fervor, has created unprecedented demand for mail-in voting as the U.S. Postal Service has been hobbled under Trump appointee Louis DeJoy. And 30 states, now including Wisconsin, will require that ballots arrive by Election Day to be counted.

The Wisconsin decision by the conservative-led Supreme Court arrived on the same day that Amy Coney Barrett cemented the court’s 6-3 conservative majority by becoming its ninth justice after the death of Justice Ruth Bader Ginsburg on September 18. It carries extra weight because Wisconsin is a swing state and because of the precedent the majority cites.

Associate Justice Brett Kavanaugh concurred with the 5-3 ruling by spotlighting a controversial argument from the Bush v. Gore battle of 20 years ago, which at the time the Court specifically directed should not be used as a precedent in the future.

Yet Kavanaugh did just that, writing in part, “As Chief Justice Rehnquist explained in Bush v. Gore, the important federal judicial role in reviewing state-court decisions about state law in a federal Presidential election, ‘does not imply a disrespect for state courts but rather a respect for the constitutionally prescribed role of state legislatures.’”

The 2000 ruling reversed the Florida Supreme Court’s recount order, effectively securing the presidency for Bush. Subsequent analyses of the disputed ballots found that Bush would likely have won the recount if it had been allowed to proceed. Kavanaugh, it should be noted, assisted on the Bush legal team as a private attorney. So did Barrett and Chief Justice John Roberts.

“[This week’s decision] falls in line with what it seems like what [Chief Justice] Roberts is up to, which is trying to maintain the status quo. This principle that you don’t want to change voting regulations too close to an election seems to be what is driving him right now,” said David Canon, a political science professor with the Elections Research Center at University of Wisconsin – Madison. “At this stage it’s the Purcell principle on steroids.”

Though the Purcell principle warns against changing election rules just before Election Day for fear of confusing voters, on the ground in Wisconsin, organizers have grown accustomed to disruptive rulings from the judiciary.

The state experienced an election eve court order to the opposite effect in April, when U.S. district judge William Conley ordered an extension to the deadline for receiving mail ballots. That’s helped it be more prepared for volatile policies in the general election.

Wisconsin has placed 500 secure drop boxes across the state, and Jennifer O’Hear, lead organizer and executive director of Common Ground Wisconsin, said most of the voters she’s been talking with don’t even want to vote by mail.

“Because of what happened in April, we’ve been operating with the most conservative assumption all along,” O’Hear said. “Plan to get your ballot in no later than 8:00 p.m. on Election Day in case they change it again.”

Leah Litman, assistant professor of law at the University of Michigan and co-host of the podcast Strict Scrutiny, cited the swing state of Pennsylvania as another place where late-stage rulings could be pivotal.

After the Pennsylvania Supreme Court ruled in favor of easing mail-in voting restrictions last month, Republican legislative leaders asked the Supreme Court to stop the decision so that ballots received up to three days after Election Day would not be counted.

The Supreme Court first declined to intervene in a 4-4 decision, but Pennsylvania Republicans then asked the court to reconsider. The court ruled against them in a 5-3 decision Wednesday, with Barrett not participating. Dissenting justices warned that they may revisit the case after Election Day, which could prove determinative if the count is close and Barrett joins the deliberations.

The Republican Party claimed that the Pennsylvania Supreme Court did not interpret state election law, but rather changed the law in violation of the Constitution ⁠— which grants the power of setting election rules to the legislatures ⁠— the same claim used in the 2000 presidential election lawsuit.

However, the Pennsylvania case shows that the Supreme Court is willing to make an exception for state voting law, which Litman says is “very concerning” given that the exception makes it harder for citizens to vote.

Republicans made a similar case in North Carolina, another swing state where demand for mail-in voting is off the charts. The court ruled against them Wednesday in another 5-3 decision. Justices Clarence Thomas, Samuel Alito and Neil Gorsuch dissented, arguing that the North Carolina case was similar to Wisconsin.

Voting rights expert Ari Berman wrote that a key difference among the three rulings was that “SCOTUS decision blocking extension of mail ballot deadline in Wisconsin was concerning federal court decision while ballot extensions in PA made by state court & NC by state board of elections.”

President Trump has already signaled plans to challenge mail-in ballot counts in key states as fraudulent, saying last month before his nomination of Barrett, “I think this will end up in the Supreme Court, and I think it’s very important we have nine justices.”

“I’m counting on them to look at the ballots, definitely,” Trump said.

For a dispute to be petitioned to the Supreme Court, at least four justices would have to agree for the matter to be heard. Currently, the court has six members who are Republican appointees and three that are Democratic appointees.

Barrett is expected to participate in decisions about election-related litigation. During a Senate Judiciary Committee hearing, she declined to recuse herself from a case that would decide the winner of the election.

“I certainly hope that all members of the committee have more confidence in my integrity than to think I would allow myself to be used as a pawn to decide this election for the American people,” Barrett said.

With over 300 active election-related lawsuits filed, it is possible that voting rights will be altered in the coming week, according to Litman.

“It’s not surprising that this is happening, now or in the lead up to the election,” Litman said. “In part because a lot of these litigants first sought relief in the political branches — like the Election Board, Secretary of State, governor or legislature — to alter the rules. Only when they fail to do so do they proceed to court.”

According to Richard Hasen, an election scholar from the University of California-Irvine School of Law, a debacle is unlikely to happen in November if one candidate receives an overwhelming majority of the votes.

“What is most likely to save us from a Twitterized Bush v. Gore 2.0 and possible post-election violence in November [is] neither an honest election system nor counter speech to combat election misinformation,” Hasen wrote in a post on the Election Law Blog. “Instead, simply speaking numerically about the margin of litigation, the odds are against an election close enough to go into overtime in a state crucial for the electoral college outcome.”

Most polls label Biden a heavy favorite to win the election, with FiveThirtyEight giving him an 89% chance of winning. The Economist projects that Biden has a 96% chance of winning the electoral college based on polling data and economic indicators.

But in light of expected legal challenges this year — and given Trump’s surprise victory in 2016 after polls showed Hillary Clinton with a similarly wide margin of victory — anything can happen.

Isaiah Murtaugh contributed to this article, which is part of a project on voting rights in America led by The GroundTruth Project, with support from the Jesse and Betsy Fink Charitable Fund, the Solutions Journalism Network and the MacArthur Foundation.