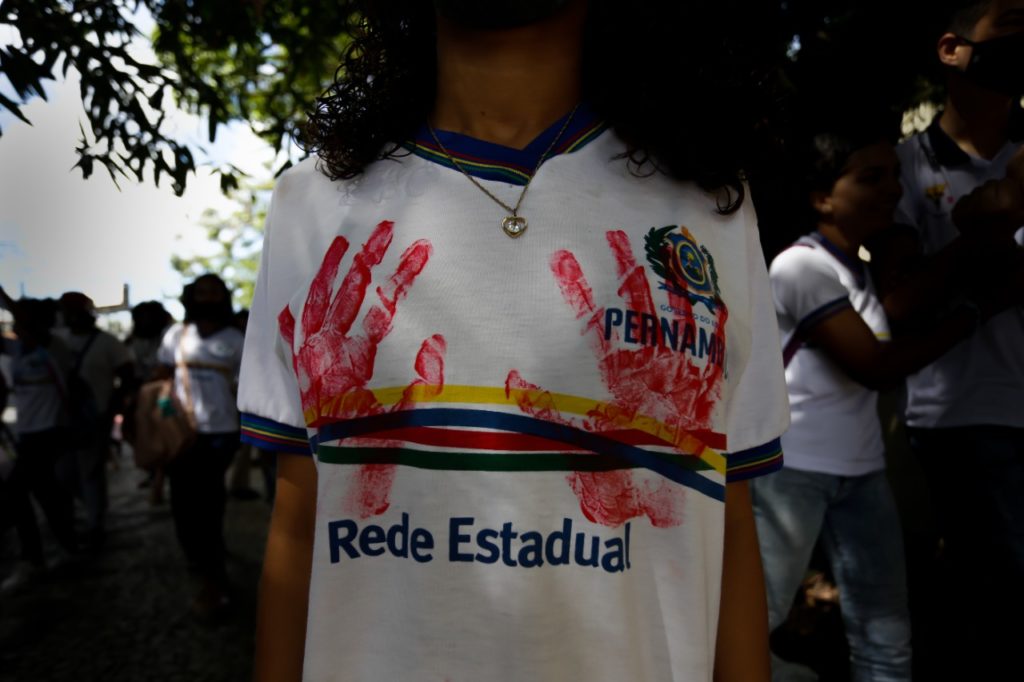 Read the original story in Portuguese in Marco Zero

Editor’s note: After having their complaints about sexual harassment by teachers and staff members ignored by the school board, students from a Brazilian public school in Pernambuco state decided to  find their own way to demand respect.

Holding signs with slogans such as “the school is public, we aren’t,” the students left the classrooms to protest against the abuse  they allege having suffered from their elders. According to them, the school administration board has neglected harassment reports.

At least a hundred students held hands, forming a  human chain in front of the school’s gates to protest the impunity of teachers and staff who, according to them, had sexually harassed teenage students. The silence was broken after the creation of an Instagram anonymous account named ​@ex.posed.sizenando, which soon received dozens of different accusations against staff in the comments section, some dating back to 2015. At least two teachers, a school staff member, and a former school director were pointed out as the harassers.

The most recent case took place right after the activities of the “Respect the Girls” project. According to two students, a math teacher approached them and asked if they used to “charge for a trick,” as he would be interested. Frightened, the teenage girls immediately reported the harasser to the school administration. But It was the board’s reaction that really infuriated them. According to complaints published on the Instagram profile and confirmed by students who spoke with Marco Zero during the protest, the school board pressured the girls to drop the complaints. The effect was the opposite: the news spread through the school corridors and the debate ended up on social media.

On March 23, two days after the anonymous profile was created, the Instagram account already had 1,620 followers. Several comments mentioned the practice of “hushing up” the complaints and intimidating students who demanded punishment for their harassers. Two days later, the protest started in front of the school. Students’ parents joined the demonstration, and representatives of the Brazilian Union of Secondary Students (UBes) and members of the Union of Education Workers of the State of Pernambuco (Sintepe) went to the school to follow the activities.

During the protest, the school vice principal, who introduced himself only as Élber, approached  the gate and summoned students to a meeting with the school board and  state representatives. He said that only students could participate. Michelle Santos, the mother of a third-year student who also works as a legal advisor to the Citizenship and Human Rights Commission of the Legislative Assembly, intervened: “They are minors, no one has the right to meet with them without the accompaniment of those responsible,” she said. After that, she and other organizations were allowed to join the meeting, as well as six students.

According to Santos, during the meeting, students shared “the difficulties in speaking with the school board” and “situations of abuse and harassment that they are aware of and that they have also suffered.” At the end of the meeting, the school board and Education Regional Management representatives agreed to investigate the complaints and create a channel for receiving them. A committee of students, accompanied by a staff member, went to the classrooms to explain what had been agreed upon.

Despite the agreement, parliamentarian Carol Vergolino, who presides over the Legislative Assembly Human Rights Commission, said she will ask for a hearing with the Secretary of Education to demand a formal investigation of all harassment allegations and the school management’s negligence.

On March 28, the Instagram profile created by the students was deactivated.

Marco Zero contacted the State Department of Education press office to ask if the complaints had been formalized and if they were following the case. Instead, they responded in a note saying the school filed a complaint against the Instagram profile for “slander and defamation” and that the police would investigate the case:

“The State Department of Education and Sports clarifies that the Sizenando Silveira Reference School, located in downtown Recife, called last week the families of the students involved in the alleged case of harassment to a meeting with the alleged perpetrator, a teacher, where the situation was sorted out. The school board filed a complaint on Thursday (March 24), against the Instagram profile for slander and defamation. The case will be investigated by the Civil Police of Pernambuco,” read the statement of the agency.