Northeastern students camp out and demand divestment from fossil fuels 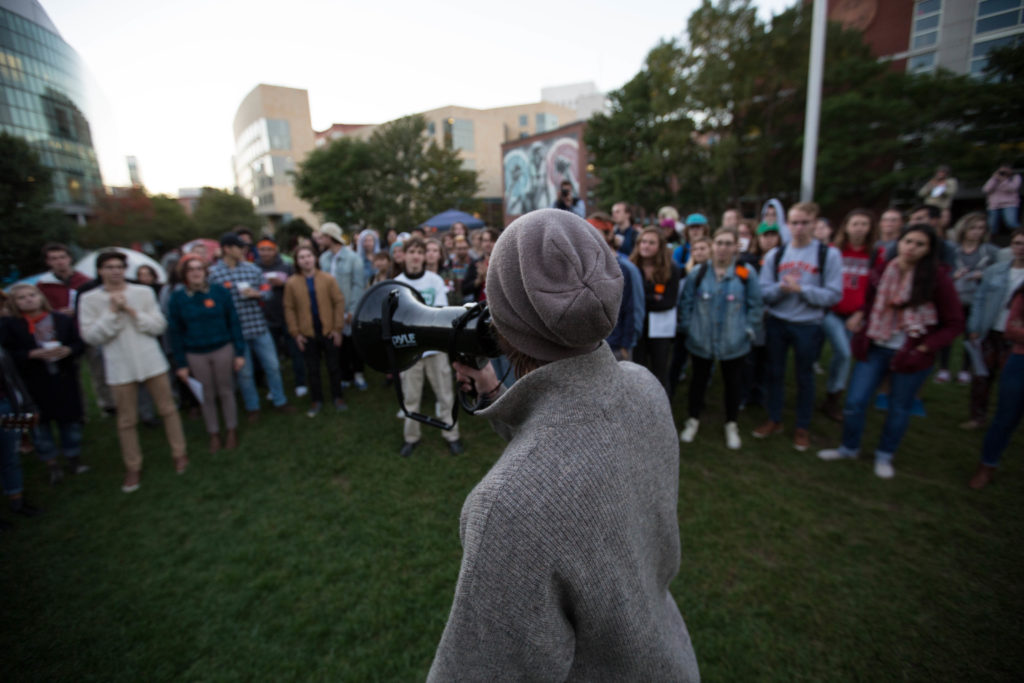 Surrounded by a crowd, a Northeastern University student advocated for divestment from fossil fuels on campus on the evening of Tuesday, Oct. 4, 2016. (Photo by Alastair Pike)

BOSTON – Nick Boyd emerged barefoot from an orange tent, pitched next to at least 10 others on Northeastern University’s Centennial Commons. Boyd is one of dozens of students who are occupying the tents in shifts between class and work. They’re part of a group called DivestNU, which is demanding that Northeastern University withdraw any investments in fossil fuels.

“This is definitely the most escalatory action we’ve done,” said Boyd, a third-year electrical engineering major, wearing a handmade “fossil free centennial” shirt. “We’re going to be out here until we get a response that we’re comfortable with from the administration,” he said.

Boyd says that in past talks between DivestNU and Northeastern, a university representative told students that the university indirectly invests as much as 9 percent of its $729 million endowment into the fossil fuel industry, through various investment funds. He also points out that Edward G. Galante, the vice chair of Northeastern University’s board of trustees, is a former ExxonMobil executive.

The divest campaign has been active for a few years at Northeastern. In 2014, 75 percent of Northeastern students who participated in a school referendum voted  in favor of divesting Northeastern University’s assets from the fossil fuel industry. Two years later, in 2016, Northeastern’s administration pledged $25 million to environmental sustainability. At the time, a student government leader said the university has “deliberately chosen to invest, not divest.”

Northeastern did not immediately respond to GroundTruth’s request for comment, or confirm how much money it invests in funds that include fossil fuels.

The modern fossil fuel divestment movement began at Swarthmore College in 2010, when a small group of students founded the Swarthmore Mountain Justice Campaign. In March 2015, the group staged a 32-day sit-in, which inspired a series of similar protests at other American universities.

The movement spread to over 300 campuses across America. About two dozen colleges and universities have committed to full or partial divestment from fossil fuels, including Stanford University, Syracuse University and Yale University.

“We’re part of a much broader movement for climate justice, and part of the fossil fuel divestment movement on college campuses here in the Boston area,” said Austin Williams, a fifth-year student at Northeastern and a founding member of DivestNU. “There are number of campaigns being waged.”

Using divestment as a tool for change goes back decades. In the ‘70s and ‘80s, students protesting South Africa’s system of apartheid pressured more than 200 universities to divest from companies doing business in South Africa. The campaign eventually led to federal legislation that some credit with helping to end apartheid.

Climate change activists point to the success of the anti-apartheid divestment movement as evidence that divestment can put pressure on fossil fuel companies.

The students camping out don’t believe that they will bankrupt the fossil fuel industry anytime soon, but they do want to make a statement.

“It’s not so much about the money,” Boyd said. “It’s mostly about removing the political power of these fossil fuels companies, because they have so much power in our government and in the national conversation and dialogue about climate change.”

A passionate and engaged student body is one of the hallmarks of a great university. We encourage a spirited exchange of ideas on our campus, and we commend these students for their continued passion to address the challenge of global climate change.

Over the past decade, Northeastern has made aggressive and impactful efforts to advance sustainability. In recent years, those efforts have been supported by the work of students, faculty, and staff on the university’s Social Impact Council and Fossil Fuel Divestment Working Group. This past summer, the university publicly announced that it will direct $25 million of its endowment to investments with a focus on sustainability, including clean energy, renewables, green building, and sustainable water and agriculture.

More information about the university’s forward-looking strategy to invest in sustainable ventures, as well as the broader sustainability practices, education, and research happening on our campuses, can be found in this summer’s announcement.