Student leaders are taking local climate issues into their own hands 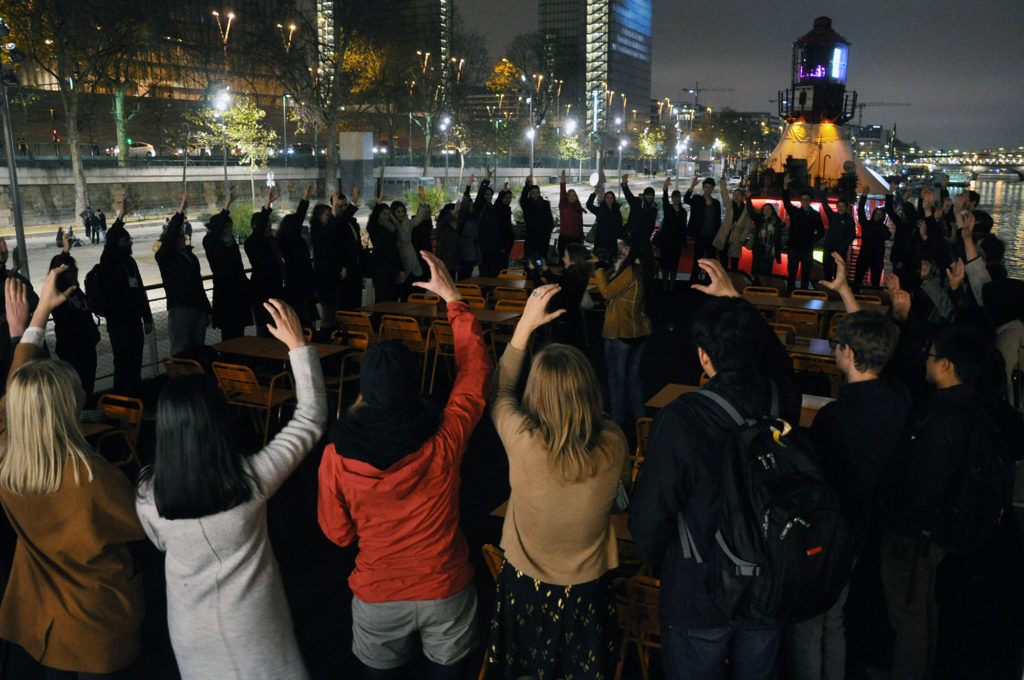 Students at the Global University Climate Forum raise their hands in support for climate action on the Seine river in Paris, France. (Photo by Chris Bentley/GroundTruth)

SÈVRES, France — About 15 miles southwest of the international climate talks now heating up in the pristine, mammoth conference halls of Le Bourget, a small group of global environmental advocates crammed into a stuffy, dimly lit classroom and debated climate solutions they’d put forth for their home countries.

Goodluck Tesha stood proudly before a small blue poster illustrating his proposal to plant fruit trees in his native Tanzania, where he’s a tourism major at St. Augustine University.

“Nobody cuts a fruit tree,” he said. Between 1990 and 2010, Tanzania lost 19 percent of its forest cover, according to the World Bank, much of it to provide household energy. Planting the trees is a way to replenish the tree population, he said, and reduce the amount of carbon dioxide in the air.

Goh Jia Lin, wearing a maroon sweatshirt and sneakers, eyed Tesha’s poster skeptically. “That wouldn’t work for us,” she said. In her home country of Singapore, the government is the one planting the trees. Instead, Lin said, she’s putting forward a program to recycle the abundance of swag bags that seem to come with every conference or meeting — “full of trash,” said Lin, a mechanical engineering major.

Lin and Tesha aren’t climate delegates but rather 22-year-old students who have gathered here at the Centre International D’études Pédagogiques in Sèvres to talk about how they can help solve the vexing problem of global warming.

Twenty-seven student teams came together over the weekend to present ideas at the third Global University Climate Forum, an initiative of the International Alliance of Research Universities, Yale University, International Sustainable Campus Network and Sorbonne Universités.

More than 160 teams competed to get here, and the winners are hoping to get feedback on their projects and suggestions for how to implement and measure them over the next year. Quite unlike COP21, there is no churn of press releases documenting the progress of the day. No high-tech displays to highlight these representatives’ considerable successes.

And yet, much in the way their home countries have submitted their own national plans to address climate change, the students assembled here say they feel confident that the work they have done leading up to today will have a lasting impact on their future home environments.

Anastasia Okorochkova, another presenter, is a 26-year-old Ph.D. candidate in Economics at the Lomonosov Moscow State University, and standing before a table of Russian sweets she shares with other students how she has managed to convince her campus to incorporate a holistic plan for sustainability.

With 50,000 students, her university she said, is “like a city.” In her project, she worked to pull together and strengthen the different work going on across the ten different schools of the university.

By coming together, Okorochkova said, “we will be able to change something together on a global scale.”

Maria Ivanova, a professor at the University of Massachusetts Boston, and a faculty advisor at the Climate Forum, pointed to Okorochkova’s project as a model, and noted that in a couple of years, students like her are going to be the leaders.

Ivanova encouraged Okorochkova to write an open letter to the Russian delegates after COP21. Russia is often criticized for being the laggards in the climate negotiations, the ones who hold back, Ivanova said. If Okorochkova writes a letter in the newspaper detailing what she and her fellows students are doing, Ivanova said, “you will get a response.”

The Climate Forum, chaired by Melissa Goodall, associate director of Yale’s Office of Sustainability, seeks to create an environment for sharing knowledge across universities and countries — outside of the formal negotiations.

“Students come to the COP because they want to witness the event, because they want to be involved. But then they arrive, and unless they have an active role to play, it’s boring,” she said. “This is a way to really connect what’s happening at the global scale with what they can achieve.”

By presenting their work, Goodall said, the students get to see more than just the quibbles over “a comma here, and a period here” that they might see during the live negotiations. “This is our solution.”

Goh Jia Lin, the student from Singapore, wants a binding agreement to come out of the official climate negotiations, and has plans to head to COP21 after this Climate Forum.

Will the voices of these students – and youth, more broadly – be incorporated into the negotiation at Le Bourget?

Okorochkova is more optimistic. She recognizes that students “are at the bottom,” but she also thinks that being in Paris is “an opportunity to say something loudly about our ambitions.”