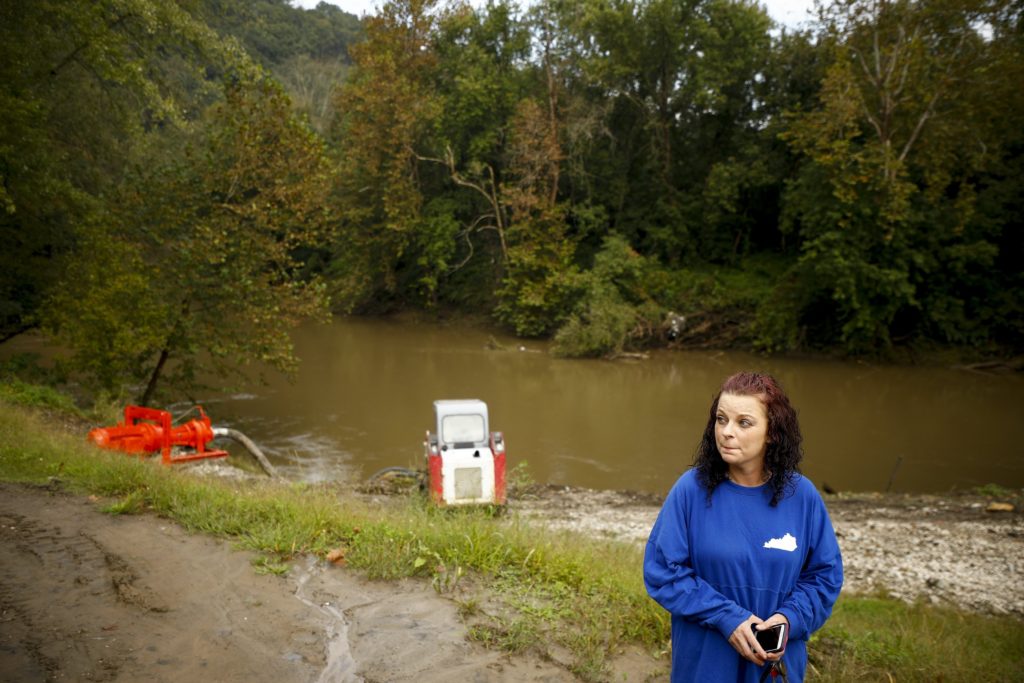 BarbiAnn Maynard, of Martin County, grimaced while touring the location of the Martin County water intake site along the Tug Fork River Tuesday, Oct. 2. Once the water is collected it is stored at the county's reservoir before being treated and delivered to customers. Maynard fears the amount of water being pumped from the Tug Fork River isn't adequate and that the water isn't properly treated, "We end up with warnings on the back of our bills that say don't drink the water," she said.

EDITOR’S NOTE: The U.N. defines access to clean water as a basic human right. A team of emerging journalists with Report for America set out to explore how it is possible that so many people living in Central Appalachia feel they don’t have this right. This six-month reporting project is a partnership of The GroundTruth Project, the home of Report for America, and three local news organizations: The Lexington Herald-Leader in KY and West Virginia Public Broadcasting and the Charleston Gazette-Mail in WV. This will be a series of written reports, a podcast episode in partnership with WVPB and a multimedia ‘special report’ on GroundTruth’s website including a short film documenting the team in the field on this reporting journey produced by GroundTruth Films. The project is made possible through a grant from the Galloway Family Foundation.

By Will Wright, Caity Coyne and Molly Born

WILLIAMSON, West Virginia — For many families in Eastern Kentucky and Southern West Virginia, the absence of clean, reliable drinking water has become part of daily life.

They buy bottled water rather than drink what comes out of their taps. They collect rainwater in buckets, fearing there won’t be any running water at all the next day. They drive to natural springs on the sides of highways and backroads to fill up jugs for cooking and making coffee.

“It’s a basic human right to have clean water. And we are in the United States of America We are in Eastern KY, in Appalachia. We have beauty, we have nature, we have water. It is just the good water is not getting to the people,” said Barbiann Maynard, a water activist from the group Martin County Water Warriors.

Based on nearly six months of reporting and dozens of interviews with residents, water district officials and experts, this series explored an ongoing crisis in Central Appalachia that has left many families with poor access to clean, reliable drinking water. The reporting project, titled ‘Stirring the Waters,’ aims to bring attention to their plight, and to show that without action, access to affordable, clean drinking water in the region may well worsen before it improves. And in the end, the project hopes to stir a public debate on the scope of the problem and what is required of government and community leaders to find solutions to the crisis.

Among our key findings:

In Southern WV, days without water are a way of life

Stirring the Waters Inside Appalachia: How Drinking Water Systems Are Failing Rural Residents

‘Tip of the spear.’ As customers beg for clean water, is a crisis looming in Appalachia?

‘Set the buckets out.’ A family of 7 prays for rain as a mountain water system crumbles.

‘Muddy, nasty water.’ Why these Eastern Kentuckians are afraid to drink from their taps.

Many in Eastern Kentucky can’t count on clean water. Here are 5 ways to fix that.

Will Wright, Caity Coyne and Molly Born are Galloway Fellows, part of our central Appalachia reporting project, which is made possible by the Galloway Family Foundation.