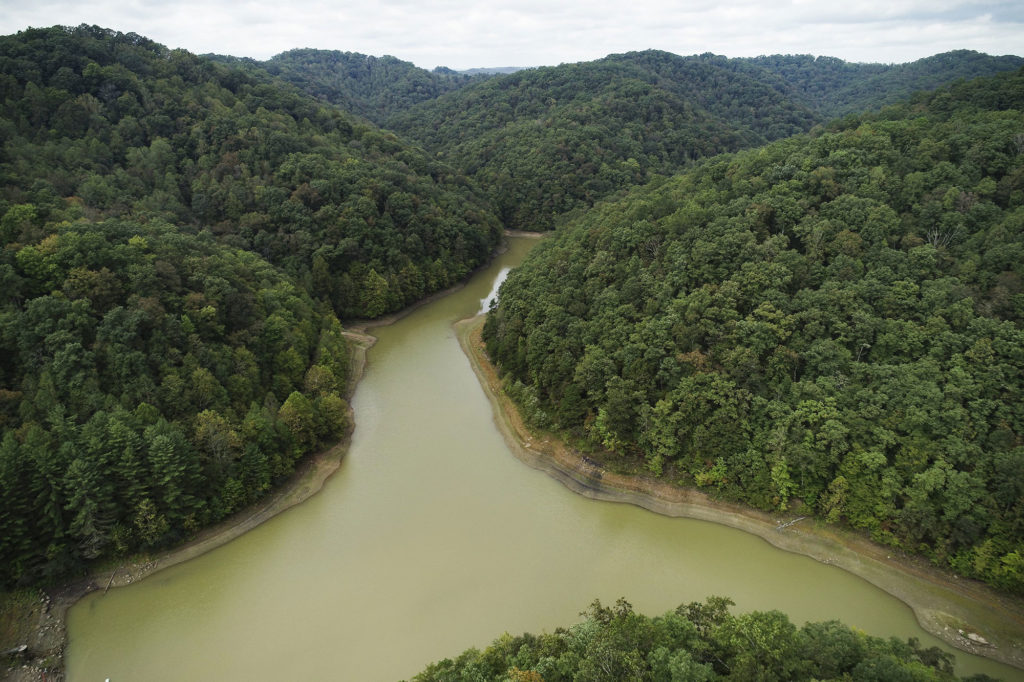 The Curtis Crum Reservoir in Martin County, Ky., on Oct. 2, 2018. Water is pumped from the Tug Fork River and stored here before being treated and delivered to residents. (Photo by Alex Slitz /Lexington Herald-Leader)

Jimmy Kerr sat in his real estate office near Pikeville and talked of a looming crisis in Eastern Kentucky.

Kerr is treasurer of the Martin County Water District, a utility that’s made national news amid reports of poor water quality and long outages that have left hundreds of families without running water for days at a time.

The crisis? Whether people in this mountainous and economically distressed region will have access to clean, reliable and affordable drinking water in the coming years.

“We’re at the tip of the spear,” Kerr said. “Places like us — small rural communities whose infrastructure hasn’t been kept up like it should — are gonna start having these issues. You’re gonna start seeing these things pop up all over the country.”

While Martin County has received more attention than other water districts, people from across Eastern Kentucky tell similar stories: brown water coming out of their taps; outages that leave families struggling to bathe their children; water bills that keep getting higher, leaving people in one of the poorest parts of the country wondering how long they’ll be able to afford city water.

Across the region, a declining population, the near-collapse of the coal industry and years of financial mismanagement have all contributed to the crisis.

Though each district and county has its own priorities and problems, many share some of the same issues:

“From an economic development perspective, we need to have adequate drinking water,” said Harlan County Judge-Executive Dan Mosley. “Back when coal severance was pouring in here left and right, that’s when a lot of these systems were built. Now that money doesn’t exist. That concerns me.”

Water infrastructure here is aging. Many of the lines and treatment facilities were built when the coal industry was booming. Wages were high and jobs were available, but as time went on, the pipes that were laid decades ago began to decay.

Rather than raising rates gradually, local politicians have often pressured water boards to keep rates unchanged, fearful they’d catch the blame for rate hikes and lose support on Election Day, according to industry and regulatory officials.

In some cases, districts refused to raise rates gradually even at the request of the Kentucky Public Service Commission, the state agency that regulates most utilities in Kentucky.

Lana Pace, finance director for Cawood Water District in Harlan County, said the PSC has performed rate studies on the Cawood district and suggested raising rates over the years, but “the board just refused, I mean it was way too high.”

“We’ve never done more than we had to, because we know we live in a depressed area,” Pace said. “It’s easy to sit in Frankfort and do all these figures on pieces of paper when it’s not coming out of your pocketbook.”

Many rural water districts across the country face similar issues, but industry groups dispute that there is a systemic crisis on the horizon.

Technology used to detect leaks and maintain infrastructure continues to improve, she said, and the U.S. Department of Agriculture’s Rural Utilities Service announced in July that it would make available more than $4 billion of direct loan funds for water projects — nearly triple the normal annual amount.

Such loans can help districts that can afford it, Kerr said, but loans aren’t feasible for Martin County and other Appalachian water districts that are in dire financial straits.

“We can’t pay the bills we got now. We can’t take out a loan,” Kerr said. “Grants, anything like that we can get our hands on, yes, absolutely we’ll get every dollar that we can.”

‘Money that’s flowing out into the ground’

Dunahoo, who grew up in Lee County, said the water quality and access issues at that time were severe: contaminated well water often left clothing permanently stained and damaged appliances and toilets.

Much of that progress has come from projects funded by low-interest loans through state and federal agencies, and through grants awarded by organizations like the Appalachian Regional Commission.

Since 1990, the U.S. Department of Agriculture has pumped about $1.3 billion into Kentucky water and wastewater projects, said Gary Larimore, executive director of the Kentucky Rural Water Association.

The Kentucky Infrastructure Authority also has sent huge sums into the region to upgrade water and sewer systems. Since 1990, the authority has awarded about $597 million through a federally assisted wastewater revolving loan fund, and more than $717 million through a safe drinking water revolving loan fund, along with more than $48 million of grant money.

Because many of those systems were heavily subsidized, districts often kept their rates as low as possible. As costs continued to increase, water districts failed to bring in enough revenue to fund needed maintenance and repairs.

In many areas, water loss rates increased as aging service lines began to crack. Now, more than one third of treated water never makes it to customers in several districts. All that lost water, Dunahoo said, is money wasted.

Water loss rates are often indicative of other problems, including water quality and reliability issues reported by ratepayers. In areas with leaking lines, sediment and groundwater can enter the pipes, resulting in dirty water that comes out of people’s taps.

In some districts with high rates of water loss, including districts in Floyd County, Martin County and Harlan County, residents have reported spending days without running water.

In December 2017, Harlan County Schools Superintendent Brent Roark wrote a letter to Mosley, the judge-executive, saying an elementary school was forced to cancel classes for days because water was shut off to the school so often.

Frequent water outages also forced many high school students who lived in the water district to miss school for days at a time, he said.

“I couldn’t expect them to come to school if they couldn’t shower,” Roark said. “It was a chronic problem.”

In his letter, Roark said the water district’s failure to provide reliable water “served as a serious interruption of the educational process and a true safety and health hazard for all customers, not just our school building, served by the water district.”

Things have improved since then. Roark said the school district has not had to cancel school at all this year because of water outages.

Cawood Water District, which serves about 4,400 people in Harlan County, fixed a key water line and cut its loss rate from 46 percent in 2017 to 16 percent in June 2018, though a district official said one line near Harlan continues to break, leading to frequent outages for customers.

‘We’re begging them for service lines’

Water districts are primarily funded by ratepayers, though many still receive grants from organizations like the Appalachian Regional Commission and the federal Abandoned Mine Lands Program, and loans through the Kentucky Infrastructure Authority.

In Martin County, though, officials said the Abandoned Mine Lands money can only be used for certain projects, not for what they need most: line replacement.

Water district officials are in the process of applying for an Abandoned Mine Lands grant that would enhance water lines leading to the federal prison in the county’s industrial park, but “we keep getting the door shut in our face” when asking for money to replace lines, said Kerr.

“We’re begging them for service lines,” Kerr said. “While I disagree … they don’t see that as economic development.”

The Martin County Water District has already been given approval for a $3.4 million Abandoned Mine Lands grant, but the money can only be used to install a new intake pump from the Tug Fork river and to make upgrades to its treatment plant. Another $1.2 million grant from the Appalachian Region Commission was awarded to help the district repair and replace leaking service lines and meters.

Nearly all federal and state dollars must be used for large capital projects or for expanding water service to new customers, not for regular maintenance, said Gary Larimore, executive director of the Kentucky Rural Water Association.

That means customers will bear the brunt of those costs. In areas of Eastern Kentucky where the population is declining, water bills will have to go up dramatically if districts hope to maintain their aging infrastructures, he said.

“Our youngest systems out there are over 50 years old,” Larimore said. “Once you start getting behind, it’s just difficult to catch up, and that’s when you start seeing these 30, 40 percent rate increases.”

Kerr, who is in the real estate business, said people will continue to be reluctant to move to Martin County as long as it has the reputation of being unable to provide reliable, clean drinking water.

Will Wright is a Galloway Fellow, part of our central Appalachia reporting project which is made possible by the Galloway Family Foundation.

This series is part of a collaborative effort by the Lexington Herald-Leader, Charleston Gazette-Mail and West Virginia Public Broadcasting that was coordinated by The GroundTruth Project and its new initiative, Report for America, a national service program made possible in rural Appalachia with support from the Galloway Family Foundation.  Reach Will Wright at 859-270-9760, @HLWright.