‘Set the buckets out.’

Jessica and Tim Taylor of Martin County collect water in buckets to deal with long water outages that have plagued their family. Photo by Will Wright / wwright@herald-leader.com

HUNTLEYVILLE — Jessica and Tim Taylor’s prayers seem to have paid off.

The rain came. It filled the buckets that lined the outside of their home. It filled the small plastic pool by the barn they use to water the animals. But not knowing how long the rain will continue makes them anxious.

The Taylors and their five children had been without running water for about a week on this cool, overcast October morning. It isn’t the first time their water has been off for days at a time, and they know it won’t be the last.

In a nation awash with technological advancements, the lives of many families in Eastern Kentucky are still dominated by the absence of one basic thing: reliable water service. Never knowing whether they’ll have running water the next day, families like the Taylors cope by collecting rainwater and relying on the generosity of friends and family to do things most people take for granted: letting the kids take a shower before school; washing the pots and pans after dinner; and scrubbing the floors after the children go outside to play.

They’re one of many families affected by crumbling water infrastructure across Central Appalachia, where long outages often leave customers without running water for days or weeks at a time.

So when the weatherman said rain was on its way, the Taylors collected their buckets and brought them to the side of the house.

Their children know the drill.

“Our 9-year-old will say, ‘Hey Dad, it’s supposed to rain, should we set the buckets out?” Jessica Taylor said.

Outages like this have left Tim Taylor feeling neglected. He thinks somebody, or some government agency, should help families like his, who live every day not knowing whether they’ll have water for bathing and cooking, much less drinking.

The Taylors live in a small community called Huntleyville in Martin County, between the town of Warfield and the Pike County line. Their house sits on top of a hill at the end of a steep gravel driveway. Inside, children’s toys lie near a window that overlooks the barn, where the family raises pigs and other animals. It’s private and secluded, even for this remote area of Eastern Kentucky.

In the kitchen, a table holds stacks of Styrofoam plates and bowls — disposable items cut down on the water needed to wash dishes. When the buckets run dry, they’ll have to make the 40-minute round-trip drive to a relative’s house to wash their pots and pans.

“Every Martin County resident, you will see that,” Jessica Taylor said. “You will see Styrofoam plates, Styrofoam cups, disposable silverware, tons of rolls of paper towels, and that’s because we never know (whether we’ll have water).”

During long outages like this one, the Taylors shower as often as they can at the homes of friends and family. They can wash off with rainwater in a pinch, but nothing beats a warm shower when you’ve been without one for a couple days.

Their water provider, the Martin County Water District, has been the subject of heavy scrutiny from state regulators for years because of its leaky water lines, which lose nearly three out of every four gallons of water the district treats before it can reach customers; poor water quality and reliability; and shoddy financial management. Local officials have warned at multiple times this year that the district was just weeks away from financial collapse.

With more than $1 million of debt and, at times, barely enough money to meet payroll, officials said financial mismanagement in prior years has led the district to its current crisis.

In November, the Kentucky Public Service Commission, which regulates most Kentucky utilities, issued an order approving a permanent rate increase that makes the average bill 25.7 percent higher than it was in March. The state also approved two additional surcharges to help the district fund repair projects and pay down its debt, bringing the average customer’s total increase to 44 percent. 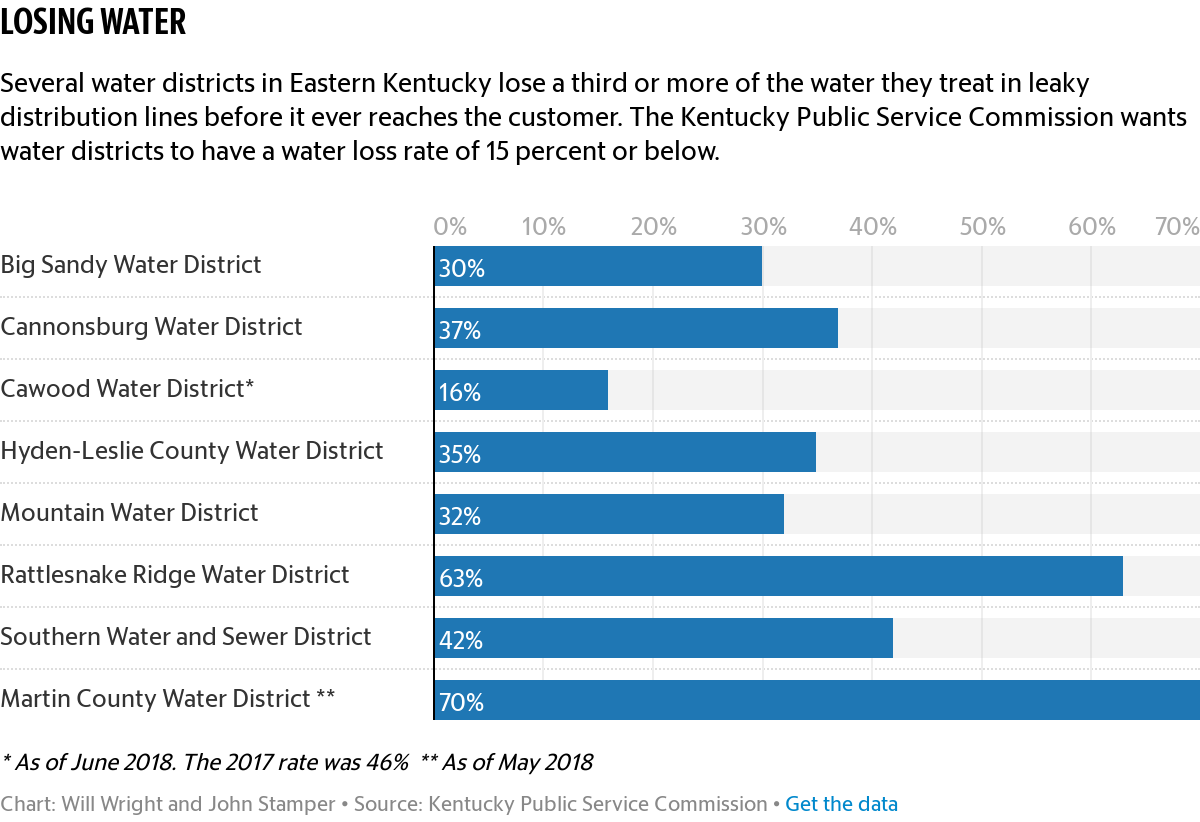 It also set a deadline for the water district to hire outside managers and submit a rehabilitation plan. If the district fails to meet that deadline, the PSC said it will cancel the surcharges and appoint a receiver to run the utility.

If both surcharges take effect, the average customer using about 4,000 gallons of water a month will pay $57.53 next year — about $25 more than they would pay in Lexington, where water outages and boil water advisories are an oddity.

Jessica Taylor said the water outages that plague her family are more than inconvenient — they can be downright embarrassing.

She skipped a doctor’s appointment the other day, not because she got busy, but because she hadn’t been able to bathe.

Sometimes they’ll ask neighbors who have water to let their kids bathe during the school week, but that comes with its own shame, too.

“We’ve learned to really take care of each other,” Tim Taylor said. “The neighbors had to stick together, and that’s what made us get through a lot of this stuff.”

“When you’ve got five kids to take a bath, that’s a lot of money,” Tim Taylor said.

Like many Martin County Water District customers, they’re upset about recent rate hikes. They don’t think it’s fair to pay so much for water they often don’t get, and for water they don’t believe is fit to drink. On top of their water bill, they and other families spend even more money on bottled water and disposable plates and utensils.

Martin County is one of the 20 poorest in the state. According to the County Health Rankings and Roadmaps program, the average household income was just shy of $30,000 in 2016.

“Of course, you will pay for whatever you have to pay for, because it’s a basic necessity, but I don’t see how people in the area are gonna make it,” Jessica Taylor said.

There ain’t no water

The Taylors could not say exactly how often their water goes off, but it’s frequent enough to become part of their daily routine.

“You go over to the faucet, there ain’t no water. You go over there maybe two days later and turn it on again, you might have a drizzle,” Tim Taylor said. “Maybe a day or so later you go over there and might be a good pressure of water.”

The Kentucky Division of Water keeps limited data on the length and frequency of outages, but water districts are required to issue boil water advisories after line breaks, which often lead to outages. Between January 2017 and Oct. 22 of this year, the Martin County Water District issued 32 boil water advisories caused by line breaks, according to data from the Division of Water.

Major breaks, like the one that happened in Martin County in October, can shut off water to thousands of residents at a time.

Because the Taylors live on a hill, they said it can take days for enough pressure to build up in repaired lines before water reaches their house.

Tim Taylor said he thinks the water district or some other agency should deliver water to residents during these long outages.

“They need to have trucks of water in here to give out to the people, to try to help the people,” he said. “If you can’t supply it through the line, you need to supply it some other way.”

When the Taylors talk about how unreliable their water is, they often point to the impact it has on their children.

Sometimes, when the water’s out, Jessica Taylor tells the kids they can’t go outside and play because she doesn’t know if they’ll be able to wash off before school the next day.

“It’s tough to tell your 9-year-old, ‘No, you can’t go outside and play, you’ve got to stay in today, we’ve got to stay clean,’” Jessica Taylor said. “You just shouldn’t have to do that.”

Most of their children will leave Martin County when they grow old enough to head out on their own. There’s not much for them here, they said.

The coal mining that helped sustain this county’s economy for decades is a shadow of what it was just five years ago, when there were about 750 coal jobs in Martin County. Now, there are about 60.

Outside of the mines, there aren’t many other options. The school district is the county’s largest employer, and the Taylors don’t think any large factories or manufacturing companies would want to relocate here.

“They’re not gonna set out buckets and try to run a factory,” Tim Taylor said. “Would you want to come in here and set up a factory knowing that maybe two days out of the week you’re going to have water, the rest of the time you ain’t? It’s ridiculous.”

Jessica Taylor said she hopes a recent $5 million influx of grant money to the Martin County Water District will help get the water system back on track, but that money hasn’t yet been delivered to the district.

When that money does arrive, $3.4 million is earmarked for upgrades to the district’s treatment plant and a new intake pump to pull water from the Tug Fork river. The remaining $1.2 million, awarded by the Appalachian Regional Commission, is designated for repairing leaking service lines.

Even with the latest grants, rate increases and surcharges, it will likely take five to seven years to fix the district’s long list of problems, said Jimmy Kerr, treasurer of the Martin County Water Board.

“It can be fixed. Is it gonna be easy? No. Is it gonna take a while? Yes,” Kerr said. “It took 20 years to get in the shape that we’re in, we’re not getting out of it in eight months.”

Many customers say they don’t trust the water district to spend its new-found money responsibly, or to take the necessary steps to provide clean, reliable water.

“They ought to tell the truth: the water is nasty,” said Calvin Jude, who also uses buckets to collect rainwater at his home near Inez in preparation for long outages and low pressure. “Admit there’s a problem.”

At water district board meetings and community gatherings this year, angry residents often became outraged at the district’s response to their plight. During one such meeting in January, a customer who was yelling and complaining about his water service was grabbed by the throatand thrown out of the building by a police officer.

In an October meeting, one attendee filled two cups of water and dared Kerr and Greg Scott, the district’s interim general manager, to drink it.

Both took a sip.

Kerr said he and his family drink the water, and have rarely experienced the issues that some residents like the Taylors report.

Still, he said the district takes their problems seriously.

“If one person in our district is having a different experience than what I’ve had or am having, then it’s our job as the district to find out why and try to fix that,” Kerr said. “That’s our responsibility … to make sure that everybody has clean, safe, affordable drinking water.”

Meanwhile, the Taylors will keep their buckets on hand, ready for the rain.

Will Wright is a Galloway Fellow, part of our central Appalachia reporting project which is made possible by the Galloway Family Foundation.

This series is part of a collaborative effort by the Lexington Herald-Leader, Charleston Gazette-Mail and West Virginia Public Broadcasting that was coordinated by Report for America, a national service program that places talented journalists in local newsrooms, and funded with support from the Galloway Family Foundation.