Opinion: Staying in the struggle at Women’s March in Mississippi 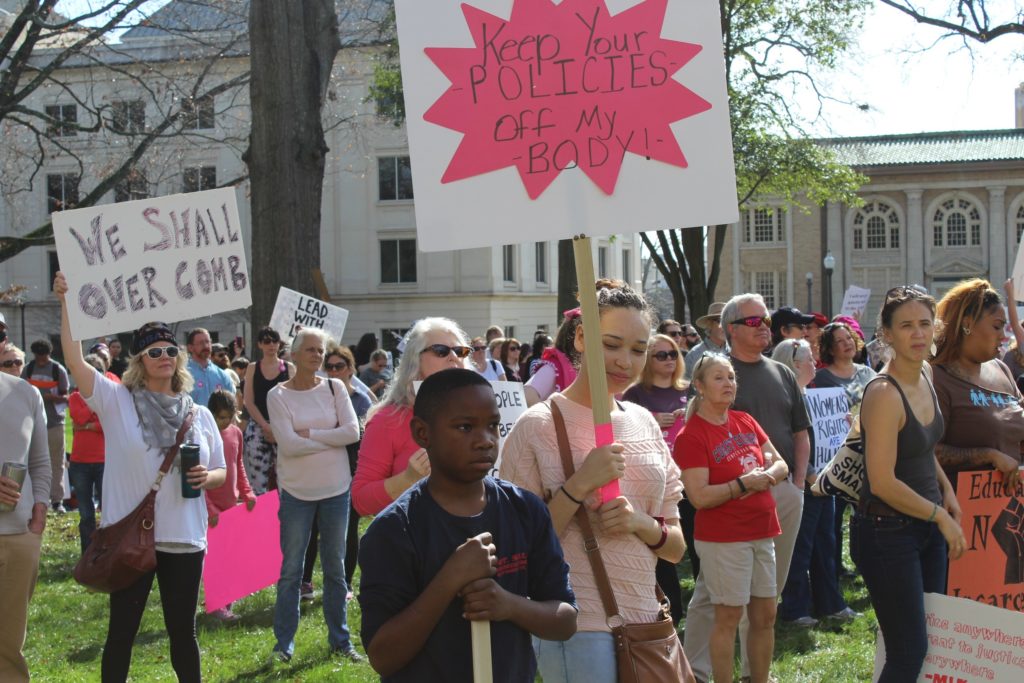 A group of marchers at the Women's March in Jackson, Miss. on Jan. 21, 2017. (Tayler Palmer/GroundTruth)

JACKSON, Mississippi – Just days prior to joining the historic Women’s March on Jackson, my enthusiasm for being a part of it was admittedly lukewarm.

For weeks, I purposely ignored them because in the haze of Donald Trump’s election as the 45th president it all seemed to be too little, too late. The election was over.

You see, during Election Day months ago, I joined the vast collective of other black women in the United States and enthusiastically cast my vote in support of Hillary Clinton.

It was a great source of pride for me that 94 percent of black women voters in the U.S. voted for the candidate that rejected sexism, racism, religious intolerance and outright bigotry.

But imagine my outrage to learn the day after the election that while I was squarely ‘With Her,’ my white female counterparts in America – about 53 percent of them – voted for HIM … a.k.a. Donald Trump.

So forgive me for giving a serious side eye to the post-election call by white feminists for the nation’s women to rise up and flex our collective muscles through a post-election solidarity march.

Where were all of you outraged feminists during the divisive, mind-boggling weeks before the election? How many of you were actually with Clinton (and me) in the voting booths? Where was your feminist warrior spirit when it mattered most?

Yes, in my frustration and extreme sadness I wrongly lumped the entire white woman collective into one vast basket and branded them as weak-willed turncoats. How dare you ask me to stand with you when I’d never had a chance to stop and sit down?

As the day of the march grew closer, my angst about feeling betrayed at the polls was slowly replaced by a determination to ensure that my frustration and disappointment from the election would not be in vain.

Yes, I know there are white women who are standing shoulder to shoulder with women of color – and have been for years – as we seek to tackle issues that impact us all, including economic security, affordable and quality childcare, access to healthcare and protections from domestic violence and sexual abuse.

Yes, I know that the women calling for a protest march are most assuredly the 42 percent of white women who were absolutely with Hillary and with me. But I also know unequivocally that while they can stand with me, they cannot speak for me – a black woman.

I know that my voice, my desires and my needs depart from their unique agendas – often dramatically – when my race intersects with my gender.So I resolved to join the 42 percenters on the steps of the Mississippi State Capitol on a Saturday afternoon and rise to the challenge once again – to be heard.

I made a conscious stand that had less to do with who had voted for Clinton or Trump and more to do with me as an individual. I took a stand for black women in the south, the Bible Belt, where we have historically been silenced, ignored or left out of the conversation completely. I took a stand for my two daughters, my sisters, my aunts, my female cousins and the countless other black women within my world who would not or could not stand up for themselves and be heard.

On Saturday, not only did I stand. I sang. I cheered. I clapped. I represented. I was heard.

I also demonstrated for my 17-year-old daughter, who joined me, that when it is time to be heard, no matter what you may disagree with or how you arrived at that place and time, never give away your own power and unique voice.

I was grateful on Saturday that what was initially a few throngs of women sprinkled here and there when I arrived soon turned into a crushing mass of women and men of all races, background and ages. I was also happy that my best friend, her four-year-old daughter and her cousin, a recent college graduate, joined us as well.

Before the march began, we gathered on the steps for a group photo to commemorate the day. I felt proud to be a part of such an historic moment, but saddened that there weren’t more women of color within our midst.

As I began recognizing some of the faces in the crowd, like state Rep. Alyce Clark, a Mississippi icon who was the first black female to become a lawmaker in the Magnolia State more than 32 years ago, I grew proud.

I was intrigued by all the personalities, the eclectic individuals with pink hats, faux cat ears, musical instruments and posters emblazoned with pro-women and anti-Trump messages. I soon found myself sucked into the growing positivity of what we were attempting to do and the admitted solidarity of the day. It didn’t matter if you were white, black, Latino, transgender, disabled or of any other orientation. We celebrated being human and worthy of respect and fairness.

By the time the fiery Jaribu Hill took to the stage with a booming voice that snatched the air from my lungs, my enthusiasm was at an all-time high. Hill, founder and executive director of the Mississippi Workers’ Center for Human Rights, challenged us all to continue being in the struggle.

“We’ve got to break up the concrete. We’ve got to make the trees slide over. We’ve got to resist at every turn,” the human rights activist shared. “We can not be scared to come out and voice our choice against oppression and the treacherous status quo. We’ve been here before. We lived through others who tried to crush us and we’re still standing, Trump! We’re still standing.”

We marched down a parallel street, stopping right outside towards the governor’s mansion, pausing only for impromptu photos, hugs and chants. Soon, we all marched around to another side street and trekked back to the capitol for speeches, musical performers and spoken word.Before long, I spotted other women who I’d gotten to know and respect over the years. My children’s kindergarten teacher was there. An attorney and former work colleague was there too.

They were all making sure they would be heard.

That means learning to take the good with the bad and realizing that even with delays and distractions, if we stay the course we will reach our destination.

For the women of color in the south and in the country, I’m resolved to keep on zigging and zagging.