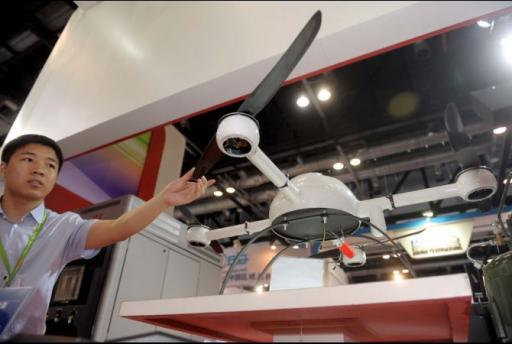 A surveillance drone is displayed during the China International Exhibition on Police Equipment 2012 in Beijing. China will spend 111.6 billion USD on its police forces in 2012, the government said as it focuses on quelling rising social unrest ahead of a once-a-decade leadership change. - (AFP / Getty Images)

SHENZHEN, China — China’s plans to deploy surveillance drones in the East China and South China seas hint at the future of warfare in the region, but are also a reminder of how far ahead leading drone manufacturing nations like the United States and Israel remain on aviation technology.

Experts say interest in unmanned aerial vehicles (UAVs) is surging throughout the Asia-Pacific region without a framework of controls curtailing their proliferation and use.

Add the Obama administration’s policy refocusing American attention on the region — the so-called “Asia Pivot” — along with US announcements of further deployments of advanced UAVs to the area, and a massive game of drone chess looks increasingly likely.

In September, China commissioned its first aircraft carrier, the Liaoning, and announced plans to use drones to monitor disputed territories including the Senkaku Islands that have caused recent friction with Japan. China detailed further plans to develop drone bases in 11 coastal provinces to be operational by 2015.

China has been playing catch-up with drone technology leaders, having purchased some technology from Israel already and showing strong interest in increasing its own share of the global UAV market, currently estimated at $6.6 billion per year and climbing.

Later this month the Zhuhai Air Show will be an important place to see what technology advancements Chinese companies have made as well as what countries might be interested in purchasing Chinese UAVs. Pakistan is known to have ordered drones from China, and countries such as Brunei and Malaysia in Southeast Asia have shown interest in China’s drones.

Dennis Gormley, a senior research fellow at the Ridgway Center for International Security Studies, said that US defense and aviation industry logic is that if it doesn’t “satisfy the growing requirement for UAVs, other states will develop their own or turn to Israel or other developers.”

“Of greatest concern are the intentions of China,” said Gormley, author of the book “Missile Contagion,” published in 2010.

In the Asia-Pacific region, the list of countries who have developed or purchased drones already includes Australia, China, India, Indonesia, Japan, South Korea, Russia, Singapore, Malaysia, Taiwan, Thailand and the Philippines, according to a report published by the US Government Accountability Office (GAO) in July this year.

In June, a Chinese frigate was also photographed testing a helicopter UAV, said Wilson VornDick, a lieutenant commander in the US Navy Reserves and an analyst on China’s military for the Jamestown Foundation.

At the end of August, China’s State Oceanic Administration (SOA) announced plans to set up UAV patrols out of 11 airbases in coastal provinces for maritime surveillance. According to state media reports a pilot program last year ran UAVs out of Liaoning province to monitor an ocean area of around 380 square miles.

More recently, immediately following renewed conflict with Japan over the Senkakus, the SOA announced on Sep. 23 that it was deploying UAVs to monitor specifically monitor the disputed islands as well as territories in the South China Sea, which China claims almost in its entirety.

Reports also indicate that Japan is using drones to monitor the Senkakus, and the Philippines is reportedly looking to purchase more UAVs from the US for monitoring its own claims in the South China Sea.

While most experts say China is not yet ready to launch a UAV fleet to rival US dominance in this technology with the capabilities and ranges of such UAVs as Global Hawk or Predator, they say it is only a matter of time before China is ready to deploy a basket of armed and unarmed UAVs suited to its needs.

“They are definitely showing some robust interest,” VornDick told GlobalPost.

VornDick, who penned an article earlier this year for the Jamestown Foundation speculating that China could “leapfrog” its naval warfare development by outfitting its Liaoning carrier with UAVs instead of traditional manned war planes because of the difficulty of training pilots to land on carriers, said another great motivation for China to develop its own drones is their low cost.

“Traditional weapons systems take generations, and what is so unique about UAV development is that it leapfrogs that development,” VornDick said.

China is known to have made advances in UAV technology and is developing more advanced, high-speed drones specifically for combat, according to the GAO report, but people like Dennis Blasko, an expert on China’s military in the China Security Affairs Group at the Center for Naval Analyses, said those systems are still in the “development phase.”

Blasko said that he hadn’t seen any evidence that China has “moved beyond the prototype stage for long-range, armed UAVs” and that China is still working on understanding and developing technology that the US has had experience operating in combat situations for over a decade.

“The important part to me is not so much the technology, eventually they’ll figure out how to build these things,” Blasko said. “The much more difficult and longer process is actually learning how to operate them for extended periods at extended ranges.”

On September 28, the Obama administration announced it would block the acquisition of four wind farm projects by Ralls Corporation, a Chinese company under parent equipment manufacturer Sany Group, that are “within or in the vicinity of restricted air space at Naval Weapons Systems Training Facility Boardman in Oregon” over fears they could be used to collect intelligence on that facility.

The move was the first time a US president had issued such an order since George H.W. Bush blocked acquisition of MAMCO Manufacturing, Inc. by China National Aero-Technology Import and Export Corporation.

While President Obama did not directly discuss the possible threat a China-owned wind farm posed to the naval base, according to the base’s website the facility is used for “performing research, development, test and evaluation activities on unmanned aerial systems,” the very systems where China lags in its operational capabilities.

“If this [news] is accurate and the wind farm projects could ‘collect intelligence’ it is likely their target would be how we operate our UAVs and train our UAV pilots,” said Blasko.

Blasko said China has “quite an array of UAVs” at the shorter range, and are experimenting with very small “hand-held UAVs that can be carried in an infantryman’s pack” but most of these are for surveillance, artillery targeting or damage assessment, or for electronic warfare, such as communications jamming operations.

Gormley agreed that China is still catching up, not only with the vehicles themselves, but with the supporting infrastructure, pointing toward the US’ decade of “real-world experience with armed drones” as a great advantage the America has in the UAV arena.

“Many of my colleagues in think tanks are creating a China that is 10 feet tall in some respects, like many of us did in the Cold War,” Gormley said. “It’s important to recognize that China has not fought a war in over three decades.”

Gormley said it “truly remains to be seen” what China’s UAV capabilities are and added that “some people question the quality of China’s ability to do sophisticated command and control” needed to effectively use UAVs in intense combat operations.

Questions have also surfaced about how much China might have learned from pieces of downed US drone technology passed along to them from intelligence services in countries in the Middle East such as Iran and Pakistan, though Gormley said how much of a benefit that has been is debatable.

“You can learn a lot by having access to the item, but the idea of direct straightforward reverse engineering, it is much harder than it first appears, especially when you don’t have access to the original design team and are operating without engineering drawings and blueprints,” Gormley said. “With these limitations, perhaps the best outcome is producing a new vehicle with substantially less capability than the copied item.”

While real operational ability might be several years away, if China does develop quality drones, that could add to their speedy proliferation around the world.

China could “definitely mass produce” UAVs, VornDick said, once they develop one seen as highly marketable. “If they have a decent product that comes relatively cheap they could mass produce it.”

VornDick said he didn’t think the US was in a “drones race” with China yet, but added that “I would definitely say that it is one of the new evolutionary pieces in military development over the next 20 years.”