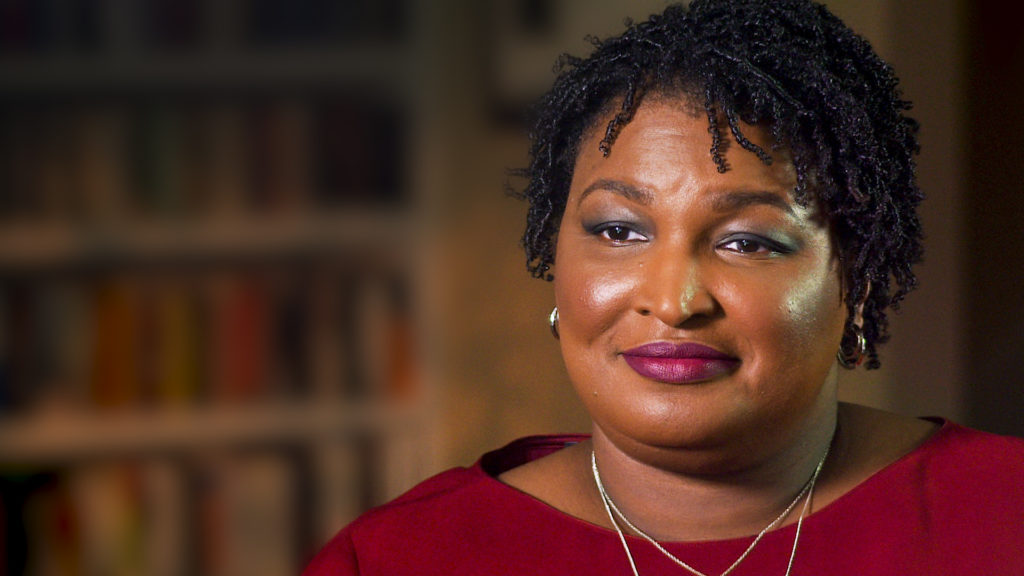 ATLANTA — Which path Stacey Abrams will choose as a political candidate remains a question, but she has left no doubt that she’ll stay the course on a determined campaign to protect voting rights as part of a fight for the future of democracy in America.

“America stands at a moment of existential crisis when it comes to our democracy,” Abrams said in a wide-ranging interview with GroundTruth at her home on April 23.

Abrams detailed her legal battle against systemic efforts to suppress voters in Georgia’s gubernatorial race which she narrowly lost to Republican Brian Kemp, who, as the state’s secretary of state, literally oversaw a race against Abrams that she and voting rights activists believe was rigged in his favor.

“America stands as the cornerstone, in fact, the foundational example of what democracy can be. And the fact that it is being eroded so swiftly by those who are afraid of sharing power should terrify every American. And that’s what worries me the most, that we aren’t taking seriously what’s at stake. That it is not simply a community being denied the right to vote. It’s not simply being forced to stand in hours long lines. It is a question of whether or not we will share power as democracy demands,” Abrams said.

The former minority leader in Georgia’s House of Representatives, Abrams has emerged as a rising star in the national Democratic Party and delivered the Democratic response to President Trump’s State of the Union Address in February.  She has consistently and convincingly brought the issue of voting rights front and center through high-profile court cases led by Fair Fight, a non-profit advocacy organization she founded, and through her own forceful presence in highlighting attacks on America’s electoral system from many corners.

“One of the reasons voter suppression is so insidious is that it not only blocks you from the vote that you are trying to take, it convinces you that you shouldn’t bother trying again. And so, it creates a longitudinal pattern for disengagement as opposed to civic engagement,” Abrams said. Had Abrams won in the November 2018 election, which had record voter turnout particularly among minority voters who came out in large numbers to support her, she would have been Georgia’s first black governor and the first woman to hold the state’s highest office.

Abrams’ 2018 campaign was run with clear intentions to create space for marginalized voices while simultaneously avoiding exclusionary approaches. In doing so, Abrams’ method actively addressed the changing demographics seen not only in Georgia but throughout the nation.

The challenge for Abrams now is the continuing effort to reveal the systemic nature of voter suppression and to fight in the courts, the legislature and through advocacy to ensure that it does not happen again in 2020, when Abrams is likely to be on a ballot either to challenge an incumbent Republican U.S. senator or, as has been reported, perhaps as a vice presidential candidate to run alongside former Vice President Joe Biden, who announced his candidacy today. So far Abrams has declined to announce any decision as to what her political future holds.

Fast Forward 2020: As last of Georgia ballots are counted, a look at how voter turnout hit record high

For now she is focusing on her campaign for voting rights after Georgia’s midterm elections triggered a renewed debate surrounding voter suppression throughout the country.  In a controversial and contested election, there were 1.4 million voter registrations canceled leading up to the vote, and 53,000 voter registrations were moved to “pending” amid a highly contested exact match verification process and there were hours-long wait time that disproportionately impacted minority voters as well as faulty voting machines in Georgia’s second largest county. Ultimately, Abrams lost by just 55,000 votes and has vowed to fight on against the efforts by now-Governor Kemp to suppress the vote particularly in precincts with large minority populations.

Abrams founded Fair Fight shortly after the gubernatorial race, responding to a much longer history of  sweeping instances of voter suppression under the tenure of former secretary of state Brian Kemp which Abrams has described as “eight years of systematic disenfranchisement, disinvestment, and incompetence.”

Abrams and the Fair Fight Action team have filed several federal lawsuits against the state of Georgia for the gross mismanagement of the 2018 election process. The main lawsuit combines smaller suits filed throughout the election, to create a bigger picture that works to depict how Georgia’s voting system disproportionately disenfranchised minority voters throughout the state.

The current secretary of state Brad Raffensperger presented a motion to have the case dismissed in January citing that it merely “combines a variety of claims.” However, Fair Fight’s lawsuit was granted approval to proceed and preparations are underway for the federal lawsuit that will likely last over a year.

However, Abrams makes it clear that she understands there is no way to determine definitive outcomes in these types of cases. In doing so, she said, “We have never been able, as a people, to solely rely on the law to save us. The law is a tool, not an outcome. It is our responsibility to determine that if the law does not serve us, to change the lawmakers.”

During the interview in her home in a townhouse nestled between a small chapel and a post office in a quiet neighborhood of Atlanta,  Abrams discussed her early experiences with activism, the importance of bipartisanship, and a general disdain for the current administration’s policies.

The House Subcommittee on Elections has been traveling the country holding field hearings as part of an effort to gather evidence to support the reestablishment of Sections Four and Five of the Voting Rights Act of 1965. These sections were deemed unconstitutional following the case of Shelby County v. Holder in 2013. Before the Shelby County v. Holder case, mostly Southern states with a history of sweeping voter suppression were forced to receive pre-clearance from the U.S. Department of Justice before altering their voting laws and processes in any way.

On February 19, the subcommittee came to Atlanta, cementing Georgia’s position as ground zero in the fight for voters’ rights.

Throughout the field hearing in Atlanta, elected officials heard the testimonies of voters, lawyers, voting rights organizations, and Abrams herself. She testified to the numerous instances of voter suppression voters faced across the state of Georgia, stating, “Voters faced obstacles that shook their confidence in the electoral process.”

The validity and vulnerability of the state’s outdated voting machines have been called into question, but a new law authorizing the purchase of new machines seemingly addressed few of the concerns that arose during the midterms while opening the door for more voter suppression in 2020.

Meanwhile, David Emadi, director of the State Ethics Commission, has subpoenaed Abrams’ gubernatorial campaign bank records while the IRS is actively investigating Fair Fight after complaints filed by the Foundation for Accountability and Civic Trust organization.  As her political profile continues to climb, it appears Abrams must adapt to new obstacles and unfamiliar terrain.

Abrams has plenty of intellectual firepower, however. Her New York Times bestselling book, Lead from the Outside, outlines the strategy she employs in her continued fight for a more inclusive democracy. Through her grassroots approach to campaigning and advocacy for voters’ rights, Abrams has created a potential blueprint for the Democratic Party to follow in the 2020 elections.

Not shying away from identity politics, Abrams believes she has a responsibility to use her experiences as an African American woman to identify shared instances of obstacles in addressing the needs of others. “The fundamental goal is the same; we all want opportunities for ourselves and our families,” Abrams said.

She added that she continues to focus on a form of leadership that creates space for everyone at the table: “That, to me, is real leadership, creating space for others, even if you can’t occupy that space yourself.”

This report was produced as part of our Voting Rights Reporting Fellowship, made possible by the support of the Fink Family Foundation.