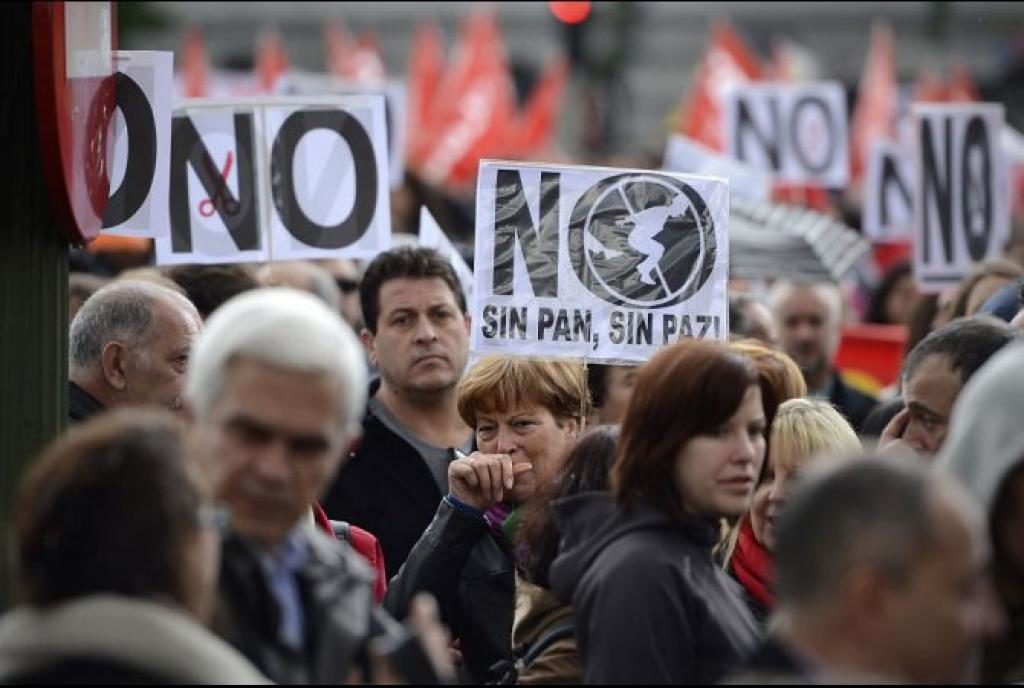 Thousands of people protest against the economic policies of the Spanish government during May Day demonstrations in the center of Madrid on May 1, 2012. Protesters massed across the country, venting anger over austerity, job reforms and an unemployment rate topping 24 percent. - ((Dani Pozo / AFP/Getty Images))

MADRID, Spain — When Mariano Castellanos looks back on the 45 years he has worked in restaurants across the length and breadth of Spain, he is amazed and saddened at how the profession’s prestige has been eroded.

“When I started out, any mother would have been happy for their daughter to marry a waiter,” he says, speaking at the back of the restaurant in central Madrid where he is maitre d’. Castellanos, 58, a stocky, jovial man, with a quickness of thought honed by decades on the job, remembers how common it was a couple of decades ago to find good waiters who combined cordiality, calmness, efficiency and the intelligence needed to read a client’s mind — all appealing traits to a potential mother-in-law.

Spain’s army of one million waiters serve 230,000 bars and restaurants, according to the country’s association of waiters, AMYCE, which Castellanos led for more than a decade. With food and drink so integral to Spain’s culture and services so important to its economy, waiters play a key role in society. But, Castellanos explains, the relative drop in the profession’s wages, its unforgiving hours and the lack of opportunities to rise up through the ranks have undermined its social cache. And in many respects, the devaluation of waiting is representative of much broader changes in the Spanish labor market.

“A lot of waiters nowadays are embarrassed to even admit they are waiters,” Castellanos sighs. “On average they barely earn about 1,100 euros ($1,450) per month.”

In February, a new chapter was added to Spain’s complex history of labor rights, when the conservative government of Mariano Rajoy unveiled a sweeping labor reform. Its intention was to make the labor market more flexible and competitive and, in the longer term, to help bring under control Spain’s soaring unemployment rate, which at over 24 percent is the highest in Europe. Its youth unemployment rate is above 50 percent.

Rajoy called the legislation “just, necessary and good for the country … the reform that five million unemployed were waiting for.”

With its emphasis on flexibility and making hiring and firing easier, the reform has been welcomed by business leaders, who have long seen the Spanish labor market as archaic and rigid. They also believe that new measures such as allowing companies to reduce salaries unilaterally after a prolonged period of losses, or to lay off staff for the same reason, are logical.

“We cannot keep the rules of the seventies, rules that were made 40 years ago when the Spanish economy was a closed economy, didn’t belong to the European Union and was not in the middle of a globalized market as we have today,” said Alberto Nadal, of the CEOE, Spain’s main employers’ association. “We have to adapt legislation to make it more flexible.”

But many Spaniards believe the legislation went too far. On March 29, unions led a general strike against the reform, which they are still pressuring the government to alter or withdraw.

In a May Day statement, International Labour Organization Director-General Juan Somavia said, “When youth unemployment rates hover around 50 percent in Spain and Greece, it is obvious that we have reached the limits of this austerity-induced recession. We need a socially-responsible approach to fiscal consolidation. In a democracy, it is more important to retain the long-term trust of people — especially the most vulnerable groups — than to gain the short-term confidence of financial markets.”

Castellanos says this reform follows a trend of declining workers’ rights in Spain, particularly since the 1990s. As Spain modernized, its economy thrived toward the end of the decade. With a real estate bubble driving the boom, Castellanos watched many young waiters drift away from his sector.

“Wages — in catering and many other sectors — couldn’t keep up with the rate of economic growth,” he said. “People could earn about the same working as a waiter as they could working in construction, but they’d choose construction, because they had weekends off.”

Hotels and restaurants made the most of the influx of immigrants, mainly from South America at first, but later from Eastern Europe. Castellanos says many business owners even went abroad to recruit waiters.

“This phenomenon meant wages were kept down and these new arrivals from abroad didn’t demand as much time off,” he says. “Many of them were arriving in Spain alone and so didn’t particularly want to have the whole weekend free, so they’d be happy to work every day.”

Labor expert Joaquin Aparicio says these developments were accompanied by legal changes. Since the democratic transition, he says, labor legislation has been revised around 50 times, always with a view to making the market more flexible and giving employers increased powers as the pressures of the global market grew.

Initially, the glut of jobs across the Spanish economy meant there was relatively little discontent. As president of the AMYCE waiters’ organization between 1997 and 2011, Castellanos did have concerns at how his sector was changing. But he believes the association’s fractious relationship with Comisiones Obreras, one of the country’s powerful main unions, made it difficult for AMYCE to make those worries heard.

In 2003, Comisiones Obreras unsuccessfully tried to pressure the apolitical AMYCE to condemn Spain’s involvement in the invasion of Iraq. The union later shunned AMYCE’s attempts to participate in collective bargaining negotiations with employers’ groups and the government. Castellanos now rues what he sees as AMYCE’s further loss of influence since the economic crisis began to bite.

Miriam Martinez, 20, is studying at Madrid’s school of catering to become a professional waiter. Food is in her family: her father and brother are both waiters and her mother is a chef. Miriam learned the basics of the trade at the family’s Galician-themed restaurant in the mountains outside Madrid.

Dressed in a waiter’s uniform comprising a black pant-suit, a bow tie and epaulettes as she emerges from her classes, Miriam already looks the part. But the new reform worries her.

“It makes things difficult,” she says. “Because they can fire you just like that. It means you have no stability and won’t ever have any.”

And despite her ambitions, she accepts that the opportunities in the sector are limited, as is job stability.

“It’s more difficult to find a job these days and employers are paying less,” she says. “I’d rather not stay in the family business, I want to start my own place — a hotel, or a place like that. But if things don’t work out, I know I might have to fall back on my family for a job.”

A major reason for Martinez’s pessimism is the chasm that has opened up over the years between workers on permanent contracts and those on temporary ones. Permanent contracts are usually well paid, including extra bonuses and up to six weeks’ vacation and the cost for an employer to fire a worker on one has traditionally been prohibitive. Workers on temporary contracts are much cheaper to fire and have few of the rights “permanent” workers enjoy. (The recent labor reform sought to close that gap, by cutting the maximum cost of firing for those on permanent contracts from 45 days’ pay per year to 33 days.)

The loosening of regulations from the mid-1980s encouraged companies to hire workers on cheap, temporary contracts, even when they were doing permanent jobs. Meanwhile, those on lucrative permanent contracts enjoyed the stability.

“There are people in our labor market with huge privileges and they are always the last to be fired,” says Pedro Schwartz, an economist at Madrid’s San Pablo University.

Schwartz contrasts these with the unprotected young workers on Spain’s many kinds of temporary contract.

“The Spanish labor market is a jungle,” Schwartz says. “There are all these different types of contract, and they make the market fragmented and non-competitive.”

Spain’s contract system means that those on temporary contracts — often young people — are liable to get fired when a firm makes cuts, even when they are dynamic, well-educated workers.

As a 27-year-old labor leader, Saul Perez knows many young Spaniards who are victims of this two-tier labor system. Despite his easy smile and status as head of a Catholic youth association for workers, the Juventud Obrera Cristiana (JOC), his face darkens as he considers the prospects for his generation.

“Most young people are very well educated, we’re the best educated generation in Spain’s history but even so we still can’t find jobs,” he says, speaking at the JOC’s small offices in downtown Madrid. The numbers show he isn’t exaggerating, with unemployment among under-25s at over 50 percent.

The kind of young people Perez refers to would, a decade or more ago, have easily found work in areas such as engineering, scientific research, the civil service, or the arts. But now, many end up doing part-time jobs removed from their expertise as they desperately look for a more suitable job. The prevalence of such young people waiting tables, for example, bothers the veteran Castellanos, who believes they allow restaurant and bar owners to push wages down and lower standards of service.

Perez believes companies and governments in Spain and across Europe have used the euro zone crisis as an excuse to cut back wages and rights and increase profit margins:

The JOC organizes educational and training programs for young people, as well as group meetings where participants discuss and analyze their life experiences, personal, professional or otherwise. Lately, many of those reunions have a negative tone, Perez says, with participants’ difficulties finding a job or making ends meet often dominating discussions.

The walls of the JOC office are covered in posters informing of religious and work-related events. For Perez, who took part in the recent general strike against the labor reform, the two are inseparable.

“The Church’s social doctrine talks about the human value of work, the dignity of a person above all else,” he says. “And what is going on right now — the fact that we can’t even plan a life or plan to have a family — clearly goes against that Christian doctrine.”

Soaring youth unemployment has sparked the beginnings of a brain drain as young Spaniards seek work in northern and central Europe, a throwback to the country’s wave of emigration in the 1960s. In the first half of 2011, the number of Spaniards relocating to Germany jumped nearly 50 percent compared with the same period a year earlier, according to recent statistics.

This is one of the most tragic consequences of Spain’s labor history. It’s a history that has left a legacy of division: on the one hand, workers who protest and strike against reform, in the belief that unacceptable conditions are being imposed on them which jeopardize a tradition of balanced labor relations; and on the other, employers who believe these same workers are resisting Spain’s transformation into a truly competitive global economy.

Mariano Castellanos, who as a respected maitre d’ is in a unique position to understand the needs and concerns of both worker and employer, sums up the dilemma Spain is facing:

“If we want to be like other industrialized countries, we probably need many of these changes we are seeing. But when you have certain rights which have cost you so much to obtain, losing those rights is very painful.”