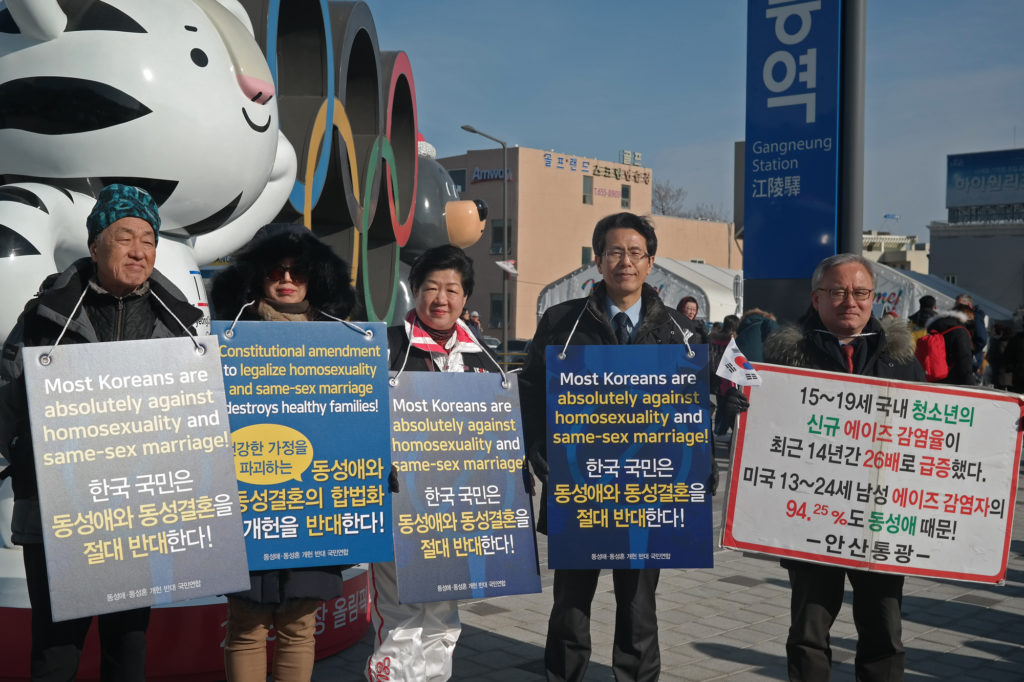 On Feb. 21, 2018, anti-LGBT protesters stand in front of the Gangneung station, a port to several Olympic venues such as ice hockey and figure skating. (Jisoo Hong/The GroundTruth Project)

SEOUL — Amid the unity flags flapping in the wind and other messages of peace at the 2018 Winter Olympics in South Korea, a group of older men and women held up signs near Gangneung Station, next to the Olympic rings and two Olympic mascots, that said, “Most Koreans are absolutely against homosexuality and same-sex marriage.”

“We heard that there was a person who believes in homosexuality inside of the Korean International Olympic Committee — we were so surprised by the news that we decided to step forward,” said Joseph Joo, a 58-year-old minister of the Hesed Marriage Culture Mission and founder of the Anti-Homosexuality Christian Solidarity organization. “We wanted to make our stance publicly known.”

Surrounded by hundreds of apparently neutral Olympic-goers, it’s easy to assume Joo and his protesting colleagues are on South Korea’s political fringes. But less than 30 percent of South Koreans support same-sex marriage, according to a 2015 survey, and only about 47 percent of Koreans in their 20’s “tolerate it.”

Joo — a novelist and poet who also writes columns for the newspaper Christian Today — has over 4,700 members in his Christian, anti-LGBT Facebook group and more than 3,629 followers on his personal page. The Anti-Homosexuality Christian Solidarity office is a brick-lined basement donned with vases of fake flowers, a piano and a single drum. He smiles alongside his wife. “We are dealing with a small budget, so my wife is also on our staff. She’s one of my greatest supporters,” Joo said.

About 20 members come here regularly, all advocates against same sex marriage and for “gay conversion” — the baseless and often harmful idea that homosexuality can be “cured.” Joo and his supporters’ latest concern is a possible upcoming amendment to South Korea’s anti-discrimination laws. In July 2017, South Korea’s progressive Justice Party announced their campaign to extend protections to the LGBT community. The protections would bar discrimination against LGBT citizens in school admissions and employment. The party hoped to extend marriage to same-sex couples in the future.

Joo worries that extending such anti-discrimination measures to LGBT people would erode a Christian business owner’s right to refuse to serve an LGBT customer, which he considers an erosion of Christian power.

Still, Joo says that he’s preaching love. “We don’t punish homosexual people about being homosexual,” he said. “No one could punish them for their identity. We are only following our faith.”

On the other side, people like Lee Soo-bin — a 24-year-old student activist at Ewha Women’s University — supports the same amendments Joo is fighting against. Lee attends one of the more progressive Christian universities in Seoul, and sees efforts to keep LGBT people out of discrimination protections as a power move for Christians.

“When many gay issues were being publicized, [Christians’] power was being weakened,” she said, citing an unsuccessful effort by a Christian group to give a movie with gay protagonists an NC-17 rating. “In order to solidify one’s group, the easiest way is to find an enemy outside of the group. And the target was us.”

Like Joo’s small conservative Christian stronghold, members of the South Korean LGBT community have their own safe spaces to plan counter-protests and advocate for amendments to South Korea’s anti-discrimination laws. At the Korean Sexual Minority Culture and Rights Center in Seoul’s hipster Mangwon district, 37-year-old director Candy Yun has similar gripes as Joo when it comes to public support and an operating budget — swaths of Korean society remains in the uninvolved middle ground.

“The working hours here are much longer than other jobs, and the pay isn’t much. But still, I do this because I have my own motivations inside of me,” Yun said. She says other minorities are already protected by South Korea’s anti-discrimination laws, and says conservative Christian groups single out LGBT people who are seeking the same protections. “[Conservative Christians] just want to hold onto being against us,” she said.

Even so, she’s proud of the inroads LGBT advocates have already made. Though anti-gay summits still take place across college campuses, Yun says she has seen significant growth in South Korea’s annual Korean Queer Culture Festival. She remembers roughly 50 people gathering at the 2000 event, with most asking that no one take a picture of them. But in 2017, she estimates that about 50,000 people attended the 10-day-long festival.

“Instead, they were always smiling and facing cameras. They seemed to be so confident about being themselves,” Yun said. “It was the greatest success [for the movement.]”

Lee, the Ewha’s Women University student, remembers realizing she was a lesbian at 14-years-old and thinking she would never live as an out lesbian. But at the 2016 Korean Queer Culture Festival, she stood proudly and faced Christian, anti-LGBT protesters with her own picket sign.

“I cried madly. I thought I was going to go through the usual path — the safe one that was given to me by society. I firmly believed I would get married and have my own family in the ‘normal’ way. But it turned out to be [the opposite],” she said. “When we get attacked from haters, we do not retreat.” In the future, Lee hopes that the LGBT community is accepted — or at least less judged by Korean society.

Already, Korean pop culture has slowly begun to warm up to its LGBT stars, with several South Korean celebrities coming out in recent years. Earlier this year, K-pop star Holland came out as gay by dropping a music video that depicted two young men in love. Since, the video has garnered over 7.7 million views on YouTube.

“It was difficult for me to admit I am a lesbian. It took years to acknowledge the fact,” Lee said. “I’m not telling [conservative Christians] to approve of us in one day. I just want them to deem us as the same people as them.”

Yet even with professed tinges of empathy, Joo doesn’t see his stance on South Korean laws wavering. In his eyes, the laws of God are correct.

“[My job] is a mission from God,” Joo said. “I feel I must do this in order to save the Korean church.”