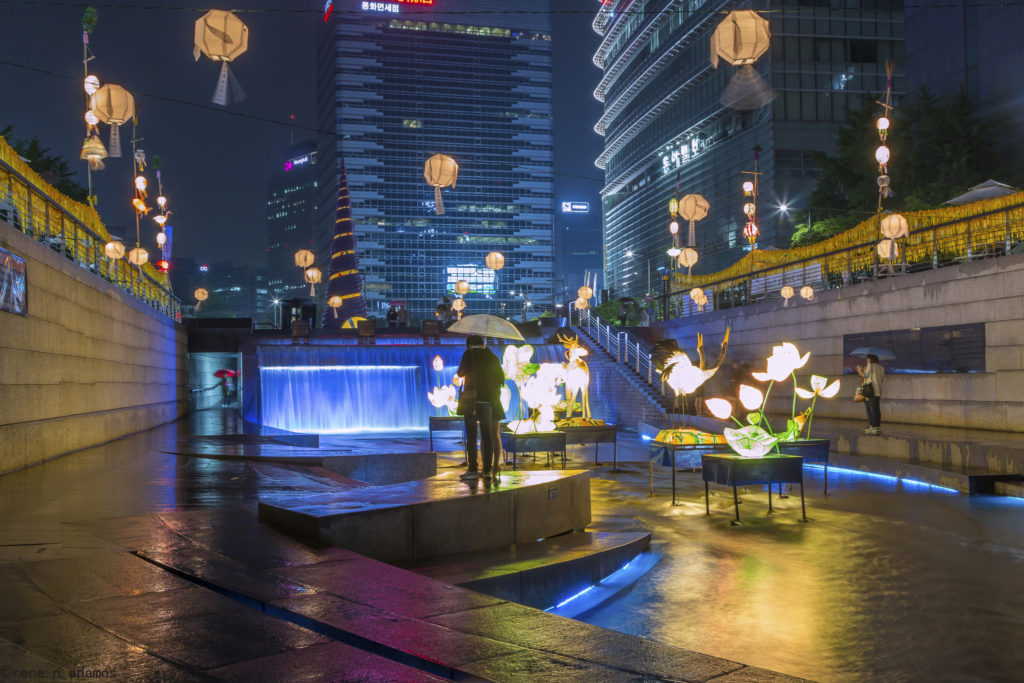 In a matter of decades, Seoul, South Korea was able to transform its economy. (Photo by Rene Adamos/Flickr Creative Commons)

Though South Korea often makes American headlines for its unstable relationship with the North, as it did this week, G20 at its very core is about global financial stability. For Moon, the summit comes right after his first-ever trip to Washington — a visit that precipitated a joint statement on North Korea and the possibility of a revised trade agreement. But as these world leaders suit up, shake hands and grin for the cameras for the second time this month, one has to wonder — how did South Korea get here? Formerly war-torn and poverty-stricken, the nation rapidly rose to the top.

South Korea’s last 60 or so years is a story of utter economic metamorphosis — a phenomenon now known as the “Miracle of the Han River.”

After the Korean War, the Republic of Korea (ROK) was one of the poorest nations in the world, with a GDP per capita of just $67 in 1953 — that’s less than Somalia’s, arguably the most economically-devastated nation in Africa at the time. But by 1980, South Korea managed to multiply its numbers by nearly 38-fold, producing more than $2,500 per capita, according to the World Bank. Now, it’s the 11th largest economy on the planet. 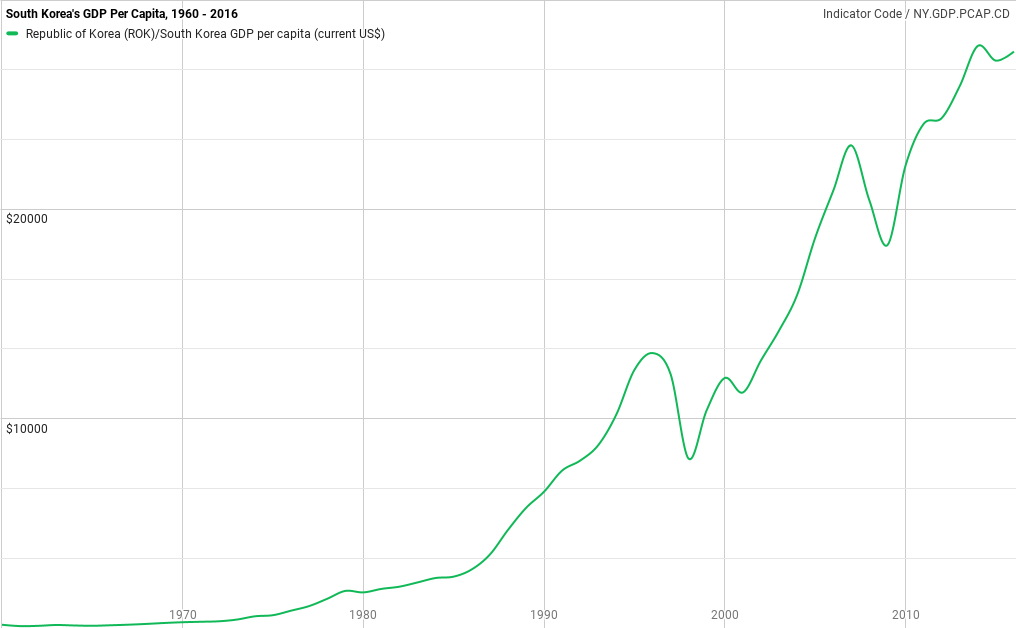 World Bank data suggests that South Korea, also known as the Republic of Korea or ROK, significantly grew its GDP per capita from the Korean War era to present. (Kelly Kasulis/GroundTruth)

It’s a success story, but it’s not a perfect one. The nation’s light years of growth happened largely under authoritarian rule, for example. So now, the ROK is still playing catch-up — several aspects of its democracy and major social issues lag behind.

“There are still legacies from the old days,” said Scott Snyder, a senior fellow of Korea Studies at the Council on Foreign Relations. “It’s really a generation of social restraint.”

The Seoul I know is a metropolis maze of cell phone stores, handbag stalls and $7-latte gimmick coffee shops (ever heard of a raccoon cafe?). My mother, however, was raised in a hut and tagged along with her elementary school classmates as they plucked cigarette butts from discarded leftovers outside the U.S. military bases. And my grandmother, forever mired by her memories of Japanese occupation in the 1940s and then the Korean War, doesn’t even have a real name. She’s a woman born in the 1940s, and her father — who once sold her for a bag of rice — didn’t believe in naming girls.

“You’re dealing with a society that has an incredibly compressed experience of modernization, and so there’s a kind of generational evolution in the rules of the game,” Snyder said. “A way a congressman may have treated women on his staff in the 1970s simply would not be acceptable today … But sometimes you see people who undertake actions that show they haven’t caught up.” 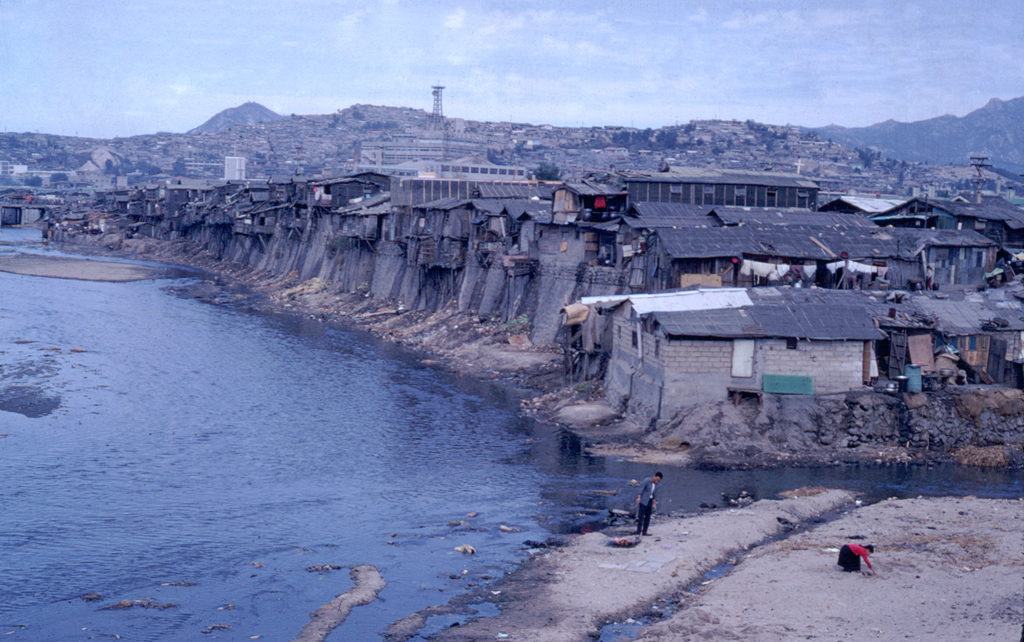 Taken just short of 50 years ago, this photo shows what Seoul housing looked like in 1968. (Photo by Homer Williams/Flickr Creative Commons)

Though South Korea’s economy skyrocketed in the 20th century, it’s still easing into a democracy that fully addresses social inequalities.

Women’s issues in particular have plenty of room for recognition. But it’s not a simple picture: On one hand, the law mandates that each South Korean parent receives one year of parental leave, valid until the child is three years old. About half of Americans, on the other hand, are eligible to receive a minimum of just 12 unpaid weeks, according to the Family and Medical Leave Act.

South Korea is also one of 59 nations to elect a woman president before 2016, with the inauguration of the recently-impeached President Park Geun Hye in 2013. The U.S. still hasn’t made that list.

Park’s impeachment, however, may be a blowback for women in politics that underscores social challenges of the present. The nation overall ranks at a low 116 out of 144 countries on the World Economic Forum’s 2016 Global Gender Gap report (the U.S. ranks at 45). South Korean women also make only about 63% of their male counterparts, sex offenders frequently evade prison and the stigma against single mothers is so severe that it’s reportedly responsible for more than 90% of Korean children being put up for adoption today.

Then there’s the reality that South Korea’s democracy has struggled significantly up until this point. The recently-impeached president, Park Geun Hye, is the daughter of former military coup dictator and president Park Chung Hee, for example. Park Chung Hee remains highly controversial today — on one hand, he’s often revered for his role in the Miracle of the Han River, but on the other hand, he enforced strict media control and bloody crackdowns on political opposition. After nearly 16 years of what was essentially self-appointed rule, his presidency only ended when he was assassinated by a Korean Central Intelligence Agency officer in 1979. The assassination was allegedly “provoked by Park’s demand that protests and riots currently occurring being be suppressed ‘even if it cost 30,000 lives.’”

The next decade of South Korean history continued with brutal leaders taking reins of the ROK, imbuing a number of irreversible, high-casualty tragedies.

That said, the nation may be entering a renewed era of democracy, and just in time for a second miracle. South Korea’s recent takedown of President Park Geun Hye through peaceful protest shows its strength as a freer country, and newly-minted Moon Jae-in has plenty to work on.

In late 2016, 8.2 percent of South Koreans aged 25 to 29 were unemployed, and the nation ranks at number two for most working hours out of any OECD country. The situation is so bad that some South Koreans now colloquially refer to their nation as “Hell Joseon,” a play on the peninsula’s historical Joseon dynasty.

That may be true today, but most of the 20th century hardly characterizes South Korea as anything other than an outlier. After all, it’s a nation that’s gone from huts and villages to “Gangnam Style” in less than a single lifetime.