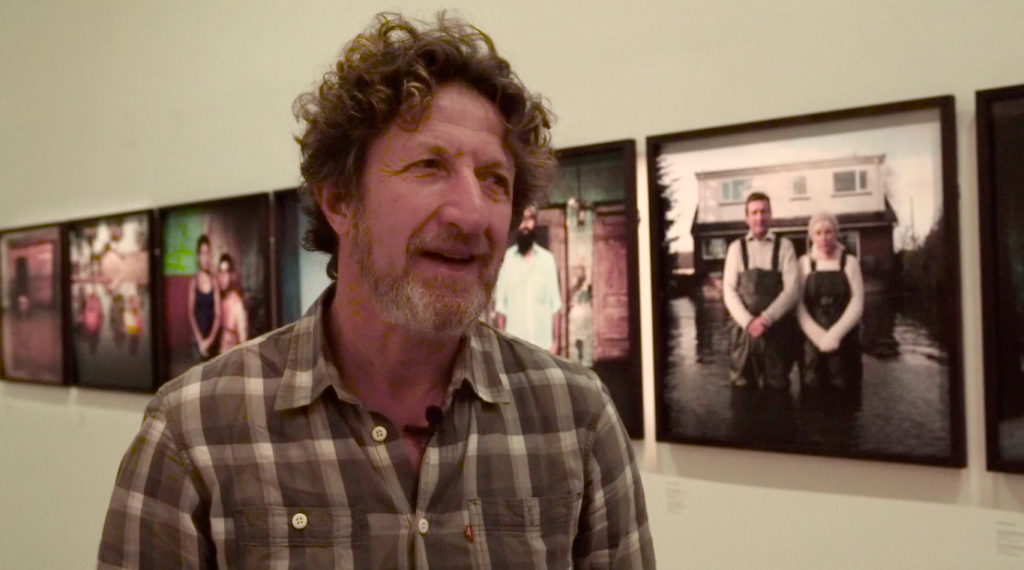 Gideon Mendel’s photo series “Drowning World” was on display in Paris during the COP21 climate conference.

A version of this piece appeared on Business Insider.

PARIS, France – Two women in brightly colored saris pause for the camera on their way to buy oil in eastern India, their stares reflected in the near shoulder-high floodwaters. South of London a couple stands in matching waders outside their suburban home. In Bangkok a woman defiantly keeps her store open from a perch above the deep waters.

The flood victims that populate Gideon Mendel’s photo series “Drowning World” come from wildly varied backgrounds and environments, yet all have had their lives changed by widespread flooding.

Since 2007, Mendel, a South African photographer, has been traversing the globe in search of these submerged worlds – work he has taken on in response to climate change.

“I was thinking a lot about the problems of the imaging of climate change,” said Mendel. “A lot of the images we see are very white – white polar bears, white expanses, beautiful glaciers – but they often feel very remote, and distant from people’s lives. I wanted to do something very personal, and see people confronting the camera directly.”

Mendel’s images focus attention on these often overlooked stories of environmental disasters, and offer a glimpse into challenges that could be far more widespread and frequent if nothing is done to address climate change now.

Mendel’s photographs are currently on display at the Musee d’Art Moderne in Paris as part of the Prix Pictet exhibition “Disorder,” which opened in November with a speech by Kofi Annan, the former secretary-general of the United Nations and the honorary president of the international award for photography and sustainability. Reflecting on the theme of the exhibition, Annan said: “Our mastery over manifold aspects of life has deluded us into thinking that we have bent the planet to our will. Yet the fragility of that assumption is exposed with each new pandemic, earthquake, tsunami or drought. With each passing day our illusion of order is shattered.”

The timing of Mendel’s work on display in Paris was especially prescient given the multinational effort that took place north of Paris at the United Nations Climate Conference in Le Bourget, where global leaders forged an agreement to stave off the worst consequences of climate change. While this new global pact was being hammered out in conference rooms, Mendel’s images were a reminder of the destructive power of our climate, and how quickly our homes and communities can be lost – but also, a testament to our resilience, and our fortitude.