From the ashes of the Great War came powerful songs and poetry. 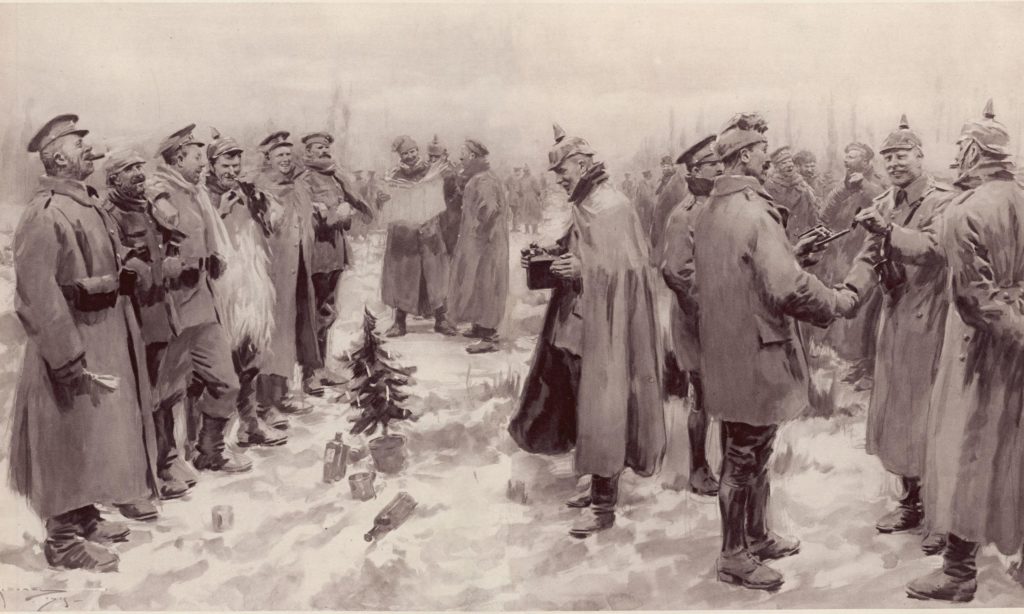 An illustration of the Christmas Truce published on The Illustrated London News on January 9, 1915. (Photo by Wikipedia/Public Domain)

Editor’s Note: Brian O’Donovan is the host of WGBH’s, A Celtic Sojourn, a radio program, which explores traditional and contemporary music from around the Celtic world. This week on the 100th anniversary of the armistice of WWI he contributes a reflection on some of the poetic and musical expressions wrought by the suffering of ‘The Great War.’

BOSTON – One-hundred years ago, on November 11th, 1918, came a peace to end the Great War, what we now know as World War One. Finally, recognizing the impossibility of it all, the murderous stalemate of trench warfare, the combatants in Europe, on each side, declared that the conflict would simply end in an Armistice, dramatically set for the 11th hour of the 11th day of the 11th month.

For more than four long years from August of 1914 to 1918, a truly savage war had raged across Europe with some 40 million casualties – military and civilians –a war that rendered entire communities homeless. whole countries in ruins, infrastructure obliterated, cities that had thrived for millennia reduced to mud and rubble.

The scars left by the war in Europe and the rest of the world were deep and lasting, and inspired songwriters, poets and writers, who used their art to reflect on the horrors of the war and to shed light on the dark impulses that lead men into a path of destruction. Their words and their music resonate even to this day.

John McCormack was born in Athlone, Co. Westmeath in 1864. He was an accomplished tenor and much sought after in the opera houses of Europe in the early part of the 20th century.  But his recording of the music hall song, It’s a Long Way to Tipperary launched him in the world of popular music of the day.

A war correspondent for the Daily Mail August 1914, the first month of the war, reported he heard an Irish Regiment, the Connaught Ramblers, singing it in unison while marching in France.

“Keep the Home Fires Burning was a song originally published in 1914, under the title, Til the Boys Come Home.”

But it was to be in 1917, when McCormack recorded it, that it became the classic anthem for British troops mired in the muck and destruction of Europe. Equally important of course, was its comforting hopefulness for those back in Britain and Ireland, to keep their chins up, British style, to keep indeed, the home fires burning.

Even the aristocracy – they were afraid of missing out on what would be the mother of all adventures, and alongside the working and middle classes, signed up in droves. In August of 1914, everyone expected the war to be over by that Christmas. But by the 24th of December 1914, trench warfare had already bogged down millions of troops in France and Belgium, and the end of the war was a long, long way off.

But out of the misery and loneliness of those very trenches, there rose the sound of german voices, singing Stille Nacht.

What followed was a spontaneous truce,  a temporary and unofficial cease fire that became known as the Christmas Truce.

American Songwriter, John McCutcheon wrote a song about the incident.  It is called Christmas in the Trenches

It’s hard to imagine now, but the youth of Europe happily, it seemed, even enthusiastically, marched off to war. Vera Britton’s Testament of Youth captures this brilliantly.

“How fortunate we were who still had hope I did not then realize,” she writes.  “I could not know how soon the time would come when we should have no more hope, and yet be unable to die”

In the early part of the war, poets like Rupert Brooke wrote patriotic verse that was used essentially as propaganda.  In his most famous poem, as a 27 year old, Brooke, already a soldier, almost idealizes death, writing in his poem, The Soldier.

If I should die, think only this of me:   That there’s some corner of a foreign field That is for ever England.  There shall be   In that rich earth a richer dust concealed; A dust whom England bore, shaped, made aware,   Gave, once, her flowers to love, her ways to roam, A body of England’s, breathing English air,   Washed by the rivers, blest by suns of home. And think, this heart, all evil shed away,   A pulse in the eternal mind, no less     Gives somewhere back the thoughts by England given; Her sights and sounds; dreams happy as her day;   And laughter, learnt of friends; and gentleness,     In hearts at peace, under an English heaven.

Less than a year later, Rupert Brooke was dead, succumbing to sepsis in the Dardanelles.

So enshrined was Brooke’s perceived patriotism that perhaps, unfairly, he got tagged in the catch phrase:  Went to War with Rupert Brooke, Came Back with Siegfried Sassoon.

Sassoon who survived the war, 1917 became one of its most savage critics, publishing what was essentially an op-ed in The Times of London so outrageous that it landed him in a psychiatric hospital in Scotland. The piece was called, Finished with the War: A Soldier’s Declaration.

“I am a soldier, convinced that I am acting on behalf of soldiers. I believe that this war, upon which I entered as a war of defence and liberation, has now become a war of aggression and conquest.”

“On behalf of those who are suffering now I make this protest against the deception which is being practiced on them; also I believe that I may help to destroy the callous complacence  with which the majority of those at home regard the continuance of agonies which they do not share, and which they have not sufficient imagination to realize.”

Had Sassoon not been of the aristocracy and with serious connections, he would most likely have been summarily court-martialed and imprisoned – or worse – for his treason, but a diagnosis of shellshock was to be his punishment.  Not wanting to abandon his colleagues in arms, He later voluntarily returned to the war.

Wilfred Owen, my favorite of all the British War poets, met and idolized Sassoon who was 13 years his senior. Recognizing his talent as a young writer, Sassoon encouraged Owen to write from the heart, from his experience. And Owen did so brilliantly and using stark bitter imagery. He called out the war effort and its political puppeteers.

Less directly than his mentor perhaps, but even more chillingly in my opinion, Owen identified the war for the killing machine it was. In his poem, The Parable of the Old Man and the Young, he alluringly retells the story of Genesis, of Isaac and Abraham, innocent and familiar at first, but then with a cold, unexpected, and blunt ending.

The Parable of the Old Man and the Young.

So Abram rose, and clave the wood, and went,

And took the fire with him, and a knife.

And as they sojourned both of them together,

Isaac the first-born spake and said, My Father,

Behold the preparations, fire and iron,

But where the lamb for this burnt-offering?

Then Abram bound the youth with belts and straps,

and builded parapets and trenches there,

And stretchèd forth the knife to slay his son.

When lo! an angel called him out of heaven,

Saying, Lay not thy hand upon the lad,

Neither do anything to him. Behold,

A ram, caught in a thicket by its horns;

Offer the Ram of Pride instead of him.

But the old man would not so, but slew his son,

And half the seed of Europe, one by one.

I have long loved the pastoral poetry of Francis Ledwidge.  He was born near the bucolic village of Slane in the Boyne Valley, County Meath, in 1887.  The neighboring Lord Dunsany a member of the gentry and himself a writer, recognized the talents of this quiet young man and arranged for his education to be furthered. Driven by his Irish patriotism, Ledwidge signed up for World War 1 largely because the British Government had promised home rule if the war effort was supported by the Irish.

In his best-remembered poem, A Lament for Thomas McDonagh, Ledwidge uses an old Gaelic scheme of internal rhyming and assonance. And the poem is full of the mythological imagery used by nationalists for centuries.

HE SHALL not hear the bittern cry

In the wild sky, where he is lain,

Nor voices of the sweeter birds,

Above the wailing of the rain.

Nor shall he know when loud March blows

Blowing to flame the golden cup

Of many an upset daffodil.

But when the Dark Cow leaves the moor,

And pastures poor with greedy weeds,

Lifting her horn in pleasant meads.

Francis Ledwidge was killed in active duty at Pashendale in July of 1917.  He was 29.

T.E. Lawrence was a key figure in the fighting in the desert around Syria, leading Arab revolts against the Ottomans, and later, helping those same Arab forces against what he saw as the occupying French.  One of his great victories was at Aqaba on the Red Sea. Lawrence of Arabia as he was known, survived the War but was killed in a motorcycle accident in 1935 in Dorset back in England. Here June Tabor sings her haunting dirge for Lawrence, Aqaba.

Songwriter Eric Bogle was born in Scotland but has made his home in Australia for many, many decades.  In 1976, he was visiting one of the vast World War One graveyards of Flanders and Northern France, and was profoundly moved by the realization that the very real lives of these soldiers were cut short by war.  One of them was a British Soldier Willie McBride, killed in 1916 at the age of 19. Willie McBride, it all happened again, and again, and again.

There are several anti-war songs that were inspired by the Great War, including during the war itself, 1915 in fact, when America was politically divided on whether to enter or remain neutral, a song appeared called, I Didn’t Raise My Boy to be a Soldier, which has the great lines…

I didn’t raise my boy to be a soldier,

I brought him up to be my pride and joy,

Who dares to put a musket on his shoulder,

To shoot some other mother’s darling boy?

But it was Eric Bogle who wrote in the late 1970s the song that was to become a true classic against war. Bogle chose as his background for the song, the Battle of Gallipoli in the Dardanelles where the Turks of the Ottoman Empire had what would be essentially their only major victory.  Disastrously, it would devastate the ANZACS as the soldiers of Australia and New Zealand were known.

Such was the devastation in Gallipoli in fact, that the date of their landing, April 25th is celebrated as ANZAC day.  On the Turks side, 250,000 died in that conflagration. Combined, British, ANZAC, and French forces has some 300,000 losses, with injured approaching another 100,000. Waltzing Matilda was an anthem of Australia at the time, and Bogle brilliantly incorporates it into his song.

Finally,  Pete Seeger, inspired by the words to old Russian folk song, used the circular inevitability of the destruction of war.  Where are the flowers, the Russian song translates “the girls have plucked them. Where are the girls, they’ve all taken husbands. Where are the men, they’re all in the army.”

This story was adapted from this week’s episode of A Celtic Sojourn. You can listen to the full episode here: