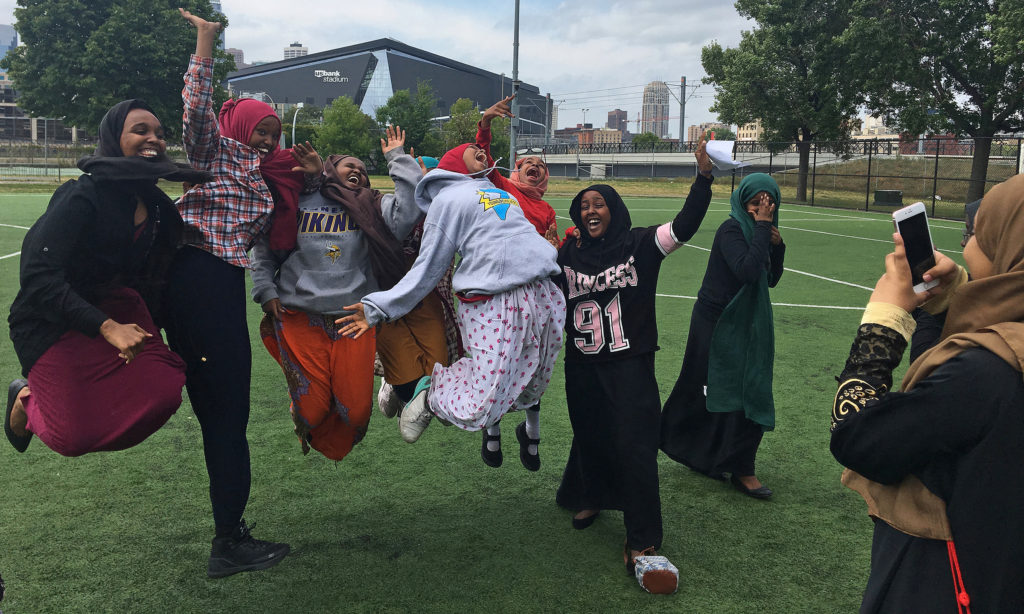 A group of beaming Somali-American high school girls in a synchronized jump on a soccer field in the Cedar-Riverside neighborhood of Minneapolis. (Photo by Fowsiya Husein)

It’s a moment of joy captured in midair: A group of beaming Somali-American high school girls in a synchronized jump on a soccer field in the Cedar-Riverside neighborhood of Minneapolis.

The photographer, 15-year-old Fowsiya Husein, a sophomore at Southwest High School in Minneapolis, captured the photo on her iPhone as part of a summer photography workshop for East African students at the Brian Coyle Community Center.

“I really liked it because everyone was happy, everyone was smiling,” Husein said. “I didn’t know this photo was going to be taken nicely.”

The photography workshop was taught by The GroundTruth Project’s photo editor, Richard Sennott, who was a longtime staff photographer at the Minneapolis Star Tribune, and is curator of GroundTruth’s Emerging Photographers series.

On Thursday, October 5, at a community event at the University of Minnesota called “Crossing the Divide: Storytelling & Somali Identity in America” — part of WGBH and The GroundTruth Project’s Crossing the Divide project — GroundTruth founder and executive director Charles Sennott awarded Husein a $500 Apple gift card for winning the student photographer contest.

“What I love about [the photo] is it’s the hijab and a Vikings sweatshirt,” Charles Sennott said. “To me, you have done the most wonderful job of telling the story of your community.”

Abdirahman Mukhtar, youth program manager at the Brian Coyle Center, said summer programs like the photography class are aimed at encouraging young people to find ways to tell their own story. Knowing most kids don’t own a camera but do have a smartphone, the class centered on how to take a professional photo with your phone.

“Our kids are very talented, but they really need an opportunity, whether it’s mentoring other young people, opportunity for employment, or an opportunity to learn new skills,” Mukhtar said.

He told the audience gathered at the University of Minnesota’s Cowles Auditorium that Fowsiya Husein is an outgoing teenager who also plays sports and guitar. “She used her iPhone to capture that [photo],” he remarked. “Imagine her talent.”

This photo workshop and award competition was supported by a memorial gift from the Robert and Susan Sennott Family.