So you want to be a science reporter: Five tips from NASA reporter Alex Stuckey 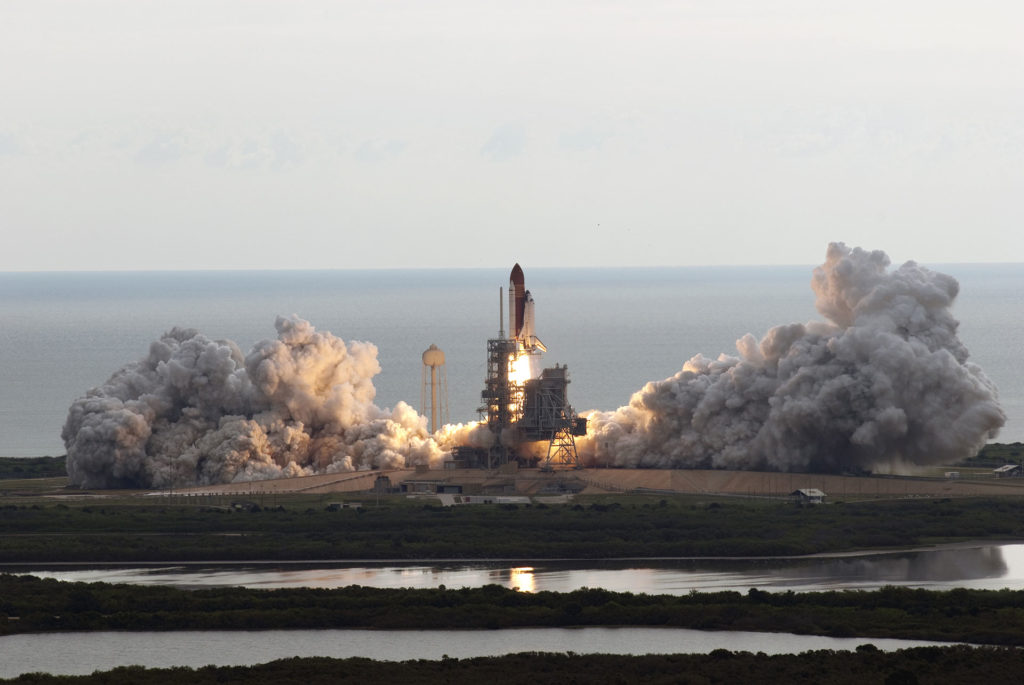 When I asked the Houston Chronicle’s NASA reporter Alex Stuckey what young journalists might get wrong when covering the science beat, her response blasted out of the phone’s speaker like a Saturn V rocket: “Oh, god, EVERYTHING.”

“Science speak” can be so thick with jargon, it often sounds like another language. Budding journalists covering scientific research might end up leaving vital information in its original “Jargonese” or — worse yet — mistranslate the scientific language and, thus, misinform the public.

Speaking with Stuckey the day after the launch of Apollo 11 — seemed like an auspicious time to ask her advice about how taking small steps in your science reporting can become giant leaps in knowledge for your audience.

Stuckey’s answers were edited for length and clarity.

1. You don’t need to have a Ph.D. to cover science

“Journalism is all about being able to dive into random stuff,” Stuckey said when I asked about her wide-ranging journalism career, from Pulitzer Prize-winning reporting about the treatment of rape victims on Utah college campuses for the Salt Lake Tribune to everything NASA for the Houston Chronicle, including capsule launch abort systems and the consequences of funding decisions.

“I actually went out of my way to not take science in college,” she said. Even so, her first job out of journalism school was covering America’s leading nuclear research facility as the Idaho National Laboratory reporter for the Post Register.

Though a science degree might help you pick up Jargonese, she’s found it more advantageous to think of things in layman’s terms, “because if I don’t understand it, the people who read my story won’t either.”

She adds that her work during and after college covering state legislature positioned her well for  science writing because so much of the research is taxpayer funded. Much of her NASA reporting is about the agency’s budget and, thus, how much Congress is willing to allot for space exploration and related research.

Knowing the legislative system and understanding budgets is a boon across the science beat. From health studies to energy research, the sciences are fueled by government grants. Check out the budgets for the myriad institutions under the National Institutes of Health umbrella — which funds over 300,000 researchers across the world, many of whom are on college campuses — or the U.S. Department of Energy. More on budget reporting later on.

2. Ask the questions your grandparents would ask

Stuckey said she was blessed with a great editor at the Post Register. He’d tear up her work if it was remotely jargony, she recalls, and tell her to try again.

But not everybody has an editor with time to teach. What then?

Stuckey suggests putting yourself in the position of your audience when asking questions and get over the fear of looking “like you don’t get it” in front of your sources. “You don’t want to ask really dumb questions, but you should,” she said.

When in doubt, she adds, think in layman’s terms: “I think it’s a mistake, too, if you don’t understand how to make it understandable to just leave it in the scientific fashion,” she said. “Because no one’s gonna know what you’re talking about. And, then who cares about the story? Only the people who did the study?”

3. Double check with the experts, but retain editorial control

“A lot of times we’re told, don’t run things by sources. Don’t ask them for help, that’s not your job” said Stuckey. “But in my experience, if I don’t understand something, I will ask [sources], ‘Can you please just read this paragraph, I want to make sure I’m right.’”

As she has gained experience and knowledge on the beat, she hasn’t needed to follow-up with sources as often, but it helped earlier in her career, “because I didn’t want to get it wrong.”

While Stuckey said she would never share a whole article with a source, she will excerpt at most two paragraphs describing a complicated term or scientific phenomenon and share that with the expert she’s interviewed to make sure her wording is correct. This can even be by reading over the phone.

“My job is to be accurate,” she said.

She suggests asking these questions when following up:

“I think people are afraid to do that,” she said. “They shouldn’t be.

4. Make the science about the reader

“Oftentimes science reporting is like ‘This really great new study just came out,’ said Stuckey, “and no one understands what that means, right?”

She cites research on drug delivery systems as an extreme example of a complex technology to share with a wider audience. Even the study’s title is hard to decipher: “A method for radiation-force localized drug delivery using gas-filled lipospheres.”

“But if you can said, ‘This will make it easier for you to get chemo drugs,’ then people will understand how this will impact them and their life,” she said. “That’s always very important when you’re doing science writing because, otherwise, people don’t care.”

Stuckey applies this principle in her current reporting — for example, when writing about research going on at the International Space Station:

“Oh, cool, people lose bone density in space,” she said offered as an example. “Okay, but for an everyday person, what does that matter? It doesn’t. […] but you could say that what they are doing up there is helping to develop drugs for osteoporosis. That means something to people!”

Not every science beat has the wonder of rocket ships and space odysseys to capture the general public’s attention, but, like a NASA rocket launch, most scientific research can’t lift off the ground without some government spending. How the money is used could be a source of stories and an opportunity to bring your beat closer to the day-to-day of your audience.

“I think if you can tell people how their [tax] money’s being spent, or if it is, potentially being misspent, they’ll be interested,” Stuckey said.

Though it can be difficult for people to wrap their minds around billions if not trillions of dollars, Stuckey said you can make it easier for them by providing context.

“The comparison I use all the time is ‘We spent about $20 billion to get to the moon in the 60s,” she said. “And, that’s what [NASA gets] every year now — and they do lots of other things — so imagine trying to [send astronauts to the moon] now, with less money than we had in the ‘60s.”

Stuckey acknowledges that it can be tricky to cover a science beat, but as the Apollo mission taught us, we shouldn’t do things because they’re easy, but because they’re hard!

Want to learn more about digging into science writing? MIT’s Knight Journalism Program offers this great list of resources for those considering science journalism as a career path.

Vox published this article last month on how researchers and reporters can avoid accidentally over-hyping and exaggerating studies.

Stuckey mentioned that science reporters were few and far between these days. Get connected with The Open Notebook! From their mission statement:

“The Open Notebook is a 501(c)(3) non-profit organization that provides tools and resources to help science, environmental, and health journalists at all experience levels sharpen their skills.”

Corrections: Stuckey’s Pulitzer Prize-winning work was previously described as “Pulitzer Prize-winning health care reporting for the Salt Lake City Tribune” with this link to her team’s award-winning reports on the treatment of rape victims at Brigham Young University and Utah State University. Stuckey was both an investigative and health care reporter with the Tribune. The news outlet is The Salt Lake Tribune and not The Salt Lake City Tribune. Here is more on Stuckey and the Tribune’s award-winning work.