ON THE GROUND IN LONG BEACH, CA 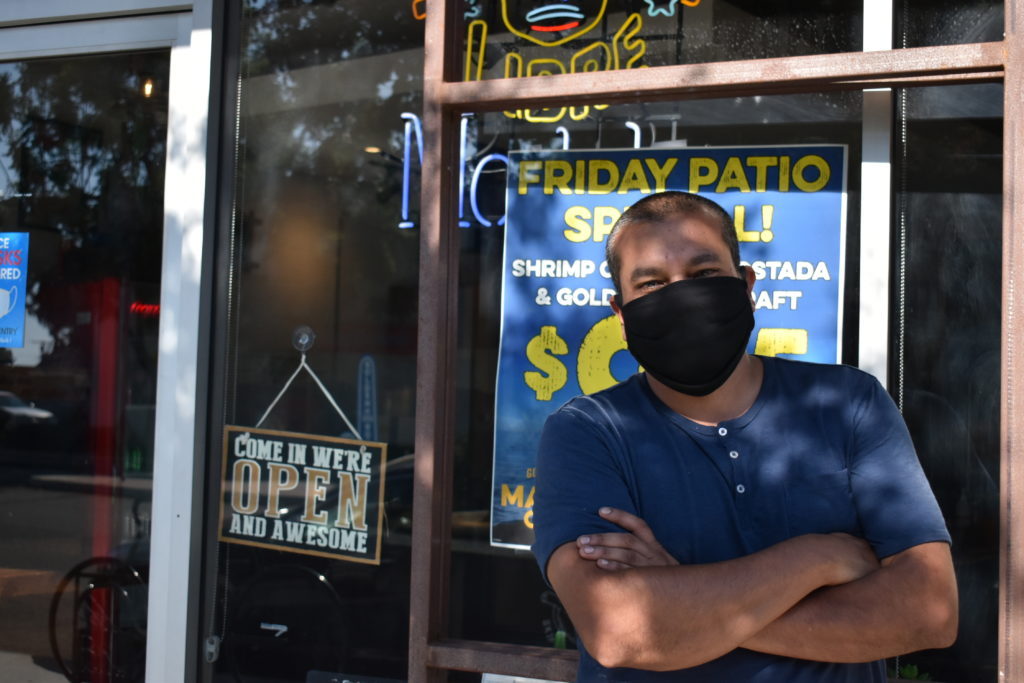 Leoh Sandoval, regarded as the founder of the Virginia Village corridor in North Long Beach stands outside his restaurant, Aguas Way on Tuesday, Aug. 25, 2020. (Photo by Sebastian Echeverry/Long Beach Post)

LONG BEACH, Calif. — The sounds of reggaeton playing from loud speakers outside a Latin party supply depot echo down Long Beach Boulevard. The music bounces from a Vietnamese pho restaurant across the street to a Salvidorian pupuseria, or flatbread, shop.

To the north is Black Ring Coffee, a contemporary coffee shop where people keep up with oat-milk lattes and nitro cold brews, and on the southern end of boulevard sits Aguas Way, a Mexican-inspired juicery and restaurant with home-grown ingredients. Fast-food chains and big-brand restaurants seemed to have overlooked this business corridor, where almost none are in sight.

North Long Beach, a community that shares a border with Compton, Paramount and Bellflower, is reinventing itself.  A diverse mix of cultures and businesses are spearheading an up-and-coming small-business corridor called Virginia Village, located at the southern tip – facades of deco-inspired architecture harken back to the 1920s before the recent growth in small businesses.

“Before we came here it was dead,” said Leoh Sandoval, owner of Aguas Way. He chuckled at the idea that he may be considered the founder of this business corridor.

Sandoval immigrated to the U.S. from Mexico in the early 1980s and established himself in North Long Beach. He opened Aguas Way in 2016. The name itself is a tongue-and-cheek Spanish reference that means, “Watch out, dude,” but the dining experience features an assortment of tacos and a rotating flight of juices such as pineapple and carrot or lime.

A year later, Sandoval met with the owners of Black Ring Coffee to help them get acquainted within the business corridor. Juliette Simpkins’ Black Ring coffee shop, brought cafe lattes and other caffeinated drinks to Virginia Village. Before these new businesses, vacant storefronts stretched along Long Beach Boulevard, inviting blight, graffiti and instances of vandalism, Sandoval said, and no one seemed to appreciate it at the time.

The community has come a long way. North Long Beach has long struggled with violence. In the 1990s, the region had the highest murder rate in the city, said former Councilman Val Lerch, who oversaw the most northern end of the region in the early 2000s.

Councilman Rex Richardson, who currently sits on the council where Lerch once did, said the 1992 Rodney King unrest spilled into North Long Beach, and the lack of a northern police department division left many feeling abandoned. That legacy lasted into the early 2000s. Between the new developments and the work of local activist groups to push for green spaces and community projects, the rate of crime has mostly shifted to other areas of town.

“We’ve been able to put a lot more attention and resources in these areas,” Austin said. “So, you say birth, let’s say rebirth, because this used to be thriving. I want to get it back to that.”

Before Virginia Village was the business corridor it is today, it was its own city. Long Beach annexed what was once called Virginia City in the 1920s. The councilman said it was once a thriving business community through at least the mid-century.

It wasn’t until after the 1992 civil unrest following the Rodney King trials that storefronts along the corridor went vacant and never returned. The rebirth, as Austin puts it, is the growth of Sandoval’s Aguas Way business and Black Ring Coffee in 2016.

As development sprouted between the highrises of downtown, and along the wind-swept business core of Belmont Shore, North Long Beach was left behind. Vacant properties and storefronts are a nuisance to local residents. Austin attempted to introduce a tax on vacant buildings to entice the owners to reinvest in the community last year. Although the council never passed the proposed tax, Austin said it opened up the conversation of bringing businesses farther north.

Now, the vacant lots in Virginia Village are slowly being reborn as the up-and-coming district takes shape. Though some vacancies can still be seen adjacent to the Pho Daily pho shop, or La Guanaquita pupuseria.

In August, Austin hosted a virtual ribbon-cutting ceremony for a new parking lot in Virginia Village, which may seem uneventful for some, but for Sandoval it gives them hope that customers will come and shop in the corridor. With the coronavirus pandemic impacting business early on in the March and April lockdowns, masked patrons can be seen returning to the corridor.

Sandoval lives within walking distance of the Virginia Village business corridor, in a neighborhood called Sutter. Being able to walk to his business drove his decision to establish Aguas Way.

“Most of us in the northside tend to go down to Bixby, or Second Street,” he said. “And it’s cool, you know, but it’s bigger corporate names. So, that’s when we said, ‘We need a place where we can walk, hangout and the neighbors can do the same thing.’”

Historically, the walkable shopping districts of Long Beach have been centered in other areas of the city, such as downtown’s Pine Avenue or Second Street in the coastal Belmont Shore community. Along these corridors, visitors can find gourmet pizza or order flights of draft beers at a brewery.

Paul Jimenez, 43, lives in the Sutter neighborhood, and grew up with Sandoval. Jimenez said the business district has improved so significantly that he’s even contemplating opening up a pet-grooming shop of his own.

Jimenez echoed Sandoval’s sentiments about Virginia Village’s lack of business development and said it was missing a walkable shopping district. Not only did that negligence attract blight, but crime as well, such as home break-ins.

“We can walk home from places like Aguas Way,” Jimenez said. “That’s something you couldn’t do before. It’s so much better.”

In recent years, North Long Beach has been attracting more businesses to settle there. Sandoval and other business owners in Virginia Village have expressed their gratitude with Councilman Austin, who represents that region of North Long Beach.

“Between us and Black Ring, there’s all these cool little shops that people didn’t notice before,” Sandoval said. “I see people walking more because they have options.”

Sebastian Echeverry covers North Long Beach for the Long Beach Post. This dispatch is part of a series called “On the Ground” with Report for America, an initiative of The GroundTruth Project. Follow him on Twitter: @onlyc_bass5.