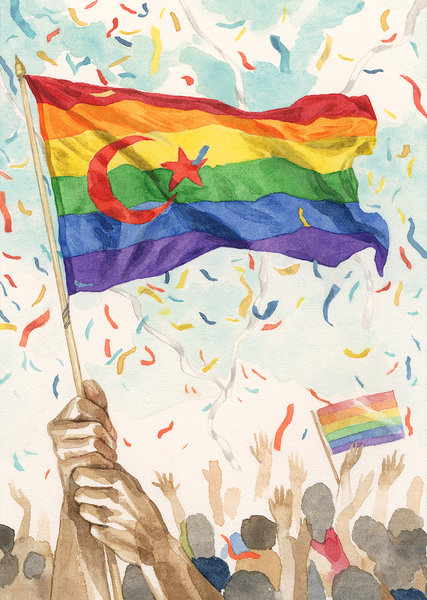 The first-person narrative, as told to Lauren Bohn, was published in partnership with the New York Times magazine.

Knowing yourself and accepting yourself are two different things. I knew that I fancied boys from the time I was in kindergarten. Although you don’t know how to name it, especially in a very heterosexual society like Turkey’s, this is something that you feel. I didn’t accept who I was, on the other hand, until years later, during university, when I found myself coming out to 30 or 40 people at once onstage in a drama class. All my friends in the class came one by one to kiss and congratulate me. But even then I hadn’t opened the curtain all the way, because I hadn’t come out to my mother.

I grew up without a father, and my mother always wanted me to be the man, the Turkish soldier. But the way I walked, the way I talked — these were not really proper behaviors for a boy. In primary school, when I was beaten up and bullied, she started taking me to karate courses. Later she pushed me to attend a military high school, but I when I took the entrance exam, I just answered the questions like a lottery form, sabotaging the entire test.

It was stressful, because I knew that there was something different inside me that she would never accept. I remember her making ugly comments about gay people when I was a child, and you record those moments in your mind. I didn’t think I could ever tell her about myself.

After I came out in university, I began writing my Ph.D. thesis on the experiences of parents in Turkey who have lesbian, gay, bisexual or transgender children. I eventually created a support group for them. But as the group grew, I felt like a hypocrite. My own mother was in the dark.

One rainy Saturday, I had plans to spend the rest of the weekend at the house of my boyfriend, Tarkan. (We’ve now been together for 17 years.) To my mother, he was just my best friend. He was also her dentist. Before I left for his house that day, she insisted on having a drink at a neighborhood bar. I tried to get out of it, but it was clear she had something on her mind. After a few beers, she started to ask questions.

“Why do you go and stay at Tarkan’s place every weekend?”

“Well, because I like to spend time with him,” I said.

“What kind of love is that?” she asked.

“Mom,” I said to her, “Don’t ask me questions if you cannot bear the answers.”

She started to cry at the bar. I took her home, and I tried to explain my sexuality, giving academic examples, talking about very scientific stuff. But that doesn’t help when someone is in shock.

It was hopeless. She got worse and worse, crying and crying all night, for weeks. Then over time, it turned into denial. She wouldn’t look me in my eyes. She wouldn’t talk to me. We were strangers living in the same house. Not to mention that she refused to go to the dentist.

I continued my work with the parents’ group. At the beginning, it was mostly moms, and I began to refer to them that way, as “my mothers.” I could tell this made my mom jealous. She and I had absolutely no relationship, and I spent a lot of time with these other women I called Mother.

One evening, after weeks of not talking, she called to ask where I was. I told her I was having wine with my mothers. Her voice was so weak, and I somehow sensed that she was ready for something — perhaps to talk to one of them. So I passed the phone to Sema, the mother of a young gay Turkish man.

She took the phone and went to the corner of the restaurant. The minutes were like hours for me. I don’t know how long they talked. When Sema came back, she was crying, and my mother was crying on the other end of the phone, but she somehow persuaded my mom to have coffee the next week.

After a while, she started to come to our meetings, and she began to change in front of my eyes, with the help of the people that I had helped. When she heard the stories of other parents, she realized she was not alone.

Some things took a long time. She didn’t to go back to Tarkan for dental treatments right away, for example. But things got much, much better, and in 2011 we even took her with us to the EuroPride celebration in Rome. She was about 75 at the time, and she couldn’t really speak correctly about these issues, but she knew she loved her son.

When I think of my mother now — four years later, she is ill and barely able to walk — I often think of her there in Rome. She actually climbed to the top of a double-decker bus and rode in the parade. She was smiling and waving to the crowds like Queen Elizabeth. Tarkan and I walked alongside on the street below, looking up at her. We were like, Whoa.