As signs of climate devastation mount, we must see a common enemy 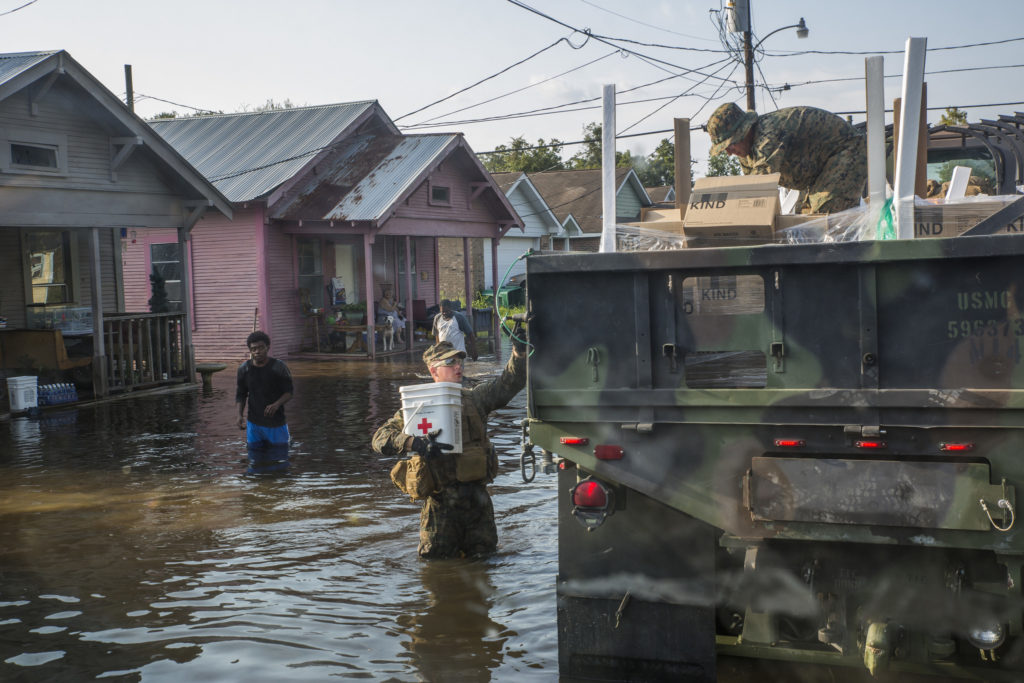 WASHINGTON — The coordinated attacks that killed nearly 3,000 Americans on a bright, blue Tuesday morning 16 years ago united the country in mourning, then forced a national conversation about how to defend its national security in an era of religiously motivated terrorism.

Though we are still grappling with its military and nonmilitary aftermath, 9/11 provoked a consensus that the country needed to respond against a common threat. And amid record-breaking hurricanes like Harvey and Irma in the South and wildfires in the West, this season we have another chance to confront a clear, common threat and push forward with a humane strategy to fight it.

From a national security perspective, a growing number of military brass define the threat as climate change. Science tells us that it is a problem of our own making, and we are unleashing forces with the power to harm us more ferociously and more persistently than any terror group.

“Climate change is a challenge that requires a broader, whole-of-government response,” Secretary of Defense James Mattis said as part of his testimony before the Senate Armed Services Committee in January.

And it is not just the military. An increasing number of Republican politicians whose hometowns are suffering the human consequences of climate change are starting to speak out more forcefully and confidently against their own political party which has more than its share of skeptics on climate change.

Miami’s Republican mayor Tomás Regalado did just that as Irma roared toward his city Friday, saying, “If this isn’t climate change, I don’t know what is. This is truly, truly a poster child for what is to come.”

It’s not just that the science linking unbelievably powerful storms to warming seas, or sweeping forest fires to hotter temperatures, overwhelmingly points in the same direction (and as astrophysicist Neil deGrasse Tyson tweeted on Sunday, “Anyone who thinks scientists like agreeing with one another has never attended a scientific conference.”)

It’s also the connection between the volatility unleashed by climate change and its impact upon America’s national security. The U.S. military and intelligence community has known this for years. But a persistent swath of the country including much of the Trump administration is far behind — and not necessarily trusting of that security assessment.

In 2008, for example, the CIA commissioned a report assessing the national security implications of climate change through 2030.

“On the homefront, responding to thawing in and around Alaska, water shortages in the Southwest, and storm surges on the East and Gulf Coasts will involve costly repairs, upgrades, and modifications. A warming climate also will encourage wildfires throughout the longer summers.”

Sound familiar? Early estimates of the economic devastation caused by Harvey hit $100 billion, to say nothing of Irma’s wake (or the potential impact of Jose) as the FEMA budget is reportedly “running on fumes.” Nearly 7 million Floridians received orders to flee Irma, one of the largest mass evacuations in U.S. history.

Meanwhile 2 million acres of land are burning across the American West, according to the National Interagency Fire Center amid record-high temperatures and rampant drought.

Security experts frequently refer to climate change as a “threat multiplier” because it makes other problems worse.

While the U.S. is not subject to the level of disruption that a country like Somalia has endured in recent years — where climate change acted as a threat multiplier to open the door for the terror group Al-Shabaab to take advantage of drought-ravaged people — we see flashes of that instability in the monster storms and wildfires trouncing the American landscape.

Yet the Trump administration has abruptly steered away from the “whole-of-government response” advised by Sec. Mattis, working to withdraw from the landmark Paris Agreement and undo decades of domestic environmental regulations.

Trump’s head of the Environmental Protection Agency, Scott Pruitt, is a climate denier who said it was “insensitive” and “misplaced” to talk about climate change in relation to Harvey and Irma.

The U.S. holds the notorious distinction of leading the world in climate change denial, with skeptics’ ideologies deeply entrenched despite the overwhelming evidence that the planet is changing dramatically.

As we are now witness to undeniable destruction wrought by a different kind of foe, we have the opportunity to mobilize. To pretend this is a problem without a cause invites further devastation. And there could not be a more fitting day to begin the process of confronting the security risks that come with climate change than on this day of somber reflection.