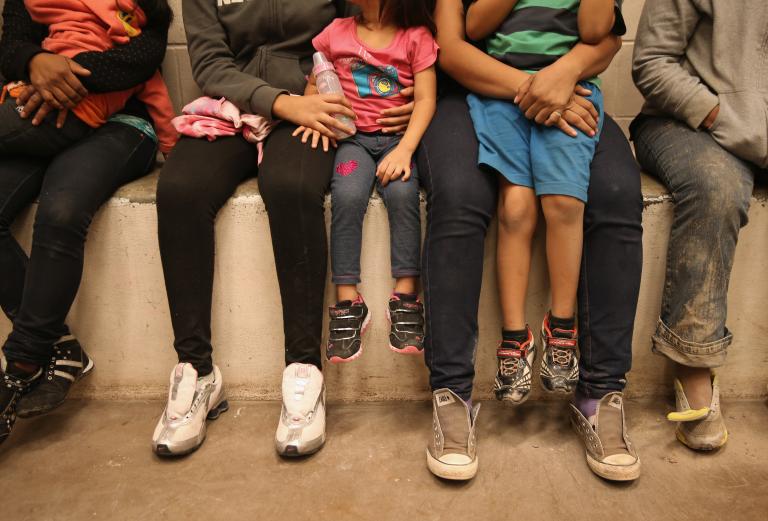 Women and children sit in a holding cell at a US Border Patrol processing center after being detained by agents near the US-Mexico border on September 8, 2014 near McAllen, Texas. Texas' Rio Grande Valley area is the busiest sector for illegal border crossings into the United States. (Photo by John MooreAFP/Getty Images)

LOS ANGELES — A brutal pattern of sexual violence affects thousands of girls and young women who flee from Central America to enter the United States, reveals a review of legal documents and interviews with defense lawyers in political asylum cases along with Los Angeles religious and social service workers.

“We had one client who was not only beaten and raped but also forcibly tattooed with gang signs and a gang member’s name, saying that person was the love of her life,” said  Sara Acharya, supervising attorney for unaccompanied minors at the Central American Resource Center (CARECEN) in Los Angeles.

“We’ve also had other clients who are terrified because they know what happens to girls in their society, and that there’s the perception that either they are the property of men, or the property of whoever’s taking care of them,” Acharya said.

Many of the girls, already vulnerable to sexual abuse at home, are coerced into sexual relationships by gang members, according to Judy London, directing attorney of Public Counsel’s Immigration Rights Project in Los Angeles.

“We have represented a child kidnapped and abused for an extended period by a drug cartel, until the family raised enough money to ‘buy’ the child back,” London wrote in an email. “The gang then threatened to kidnap her again if more money was not paid. This appears to be a common extortion tactic.”

A Honduran girl named Sandra testified in a US political asylum declaration that when she was 17 and living back home, a local man in his 20s from a family connected to politics and drug trafficking began to harass her. He initiated with repeated phone calls and offers of rides to school, which Sandra declined.

The man persisted until she accepted a ride, taking her to an empty house and pushing sex. Sandra refused until he pulled a gun on her and threatened her life.

“Later when he started I told him to stop that, better another day. But he didn’t stop. I was crying,” Sandra said in her asylum declaration, taken in the fall of 2014 in Los Angeles. “He would tell me, ‘I am not going to hurt you and it’s only [for] a little while.’”

He raped her three more times after that first attack, Sandra said. She became pregnant.

Sandra’s story of rape and violence is also the story of many other Central American girls and women who enter the US each year seeking safe harbor.

Eighty percent of migrant women are sexually assaulted as they escape to the US through Mexico, according to a study by American University researchers Dennis Stinchcomb and Eric Hershberg.

They are part of a larger group of children and young men and women who for decades have been arriving at the US-Mexico border. Many of them are children traveling alone. Last year, US Customs and Border Patrol (CBP) agents apprehended 68,445 unaccompanied minors in fiscal year 2014, more than four times the number from 2013. Seventy-five percent of those children were from the “Golden Triangle” countries of El Salvador, Guatemala and Honduras. Many children, like Sandra, were the victims of rape and sexual violence.

Such treatment results in various forms of trauma for these girls manifesting in a wide range of behaviors in the United States, from being disruptive at school, to overeating, to thoughts of suicide.

“Most of them are reporting that they’re feeling depressed, they’re feeling down, they can’t sleep,” said Elena Fernandez, the director of behavioral health services at St. John’s Well Child Clinic in Los Angeles. “They have intrusive thoughts. They have flashbacks.” Many girls need individual counseling and psychiatric evaluations to deal with this.

After Sandra became pregnant, she didn’t know what to do. Her rapist threatened her life when she refused to have an abortion, she recounted in her declaration for political asylum in the US.

He sent a message ordering her to leave Honduras. When she asked why, he said, “‘That’s all I’m going to tell you. If not, you will have to suffer the consequences.’”

Wrapped up in the risk of sexual violence is a high risk of murder as well. Gang and cartel members who rape these girls may kill them afterwards, especially if the girls’ families cannot pay ransom, according to London.

El Salvador, Guatemala and Honduras have some of the highest rates of femicide, or gender-motivated murder, in the world, as the UC Hastings Center for Gender & Refugee Studies reported.The vast majority of girls interviewed for a UN High Commissioner of Refugees report discussed experiencing sexual violence or being threatened with it.

Associated Press reporter Alberto Arce has written extensively on gang violence against women and children in El Salvador. He quotes the journal of a criminologist who digs up the graves of murdered girls. According to one entry:

[On] June 7, 2013 in Santa Tecla, the girlfriend of a gang member recruited two friends to go to a party. The gangsters suspected that one of the girls betrayed them, talking to a rival gang. Eight men raped the girls. First two were killed with multiple knife wounds. The third was held for 24 hours while they asked for ransom, but when they couldn’t get the money they killed her, too. The three were dismembered. They were 12, 13 and 14 years old.

Gang members also threaten the lives of the children born to their rape victims.

“We have another child who was raped by men who entered her home,” Public Counsel’s Judy London recalled. “Police did nothing; the family kicked her out. She couldn’t go to school anymore, because she had a baby as a result of the rapes. She was 14 or 15 years old. She fled her country after one of the men who raped her threatened to kill her baby.”

The girls know better than to expect police protection, London adds. “They know that in many situations the police are working hand-in-hand with the gangs, so they would be at more risk if they went to police.” As a result, London said, they have no choice but to escape.

In the late summer of 2013, Sandra left Honduras, just days after her rapist threatened her. She arrived at the US-Mexico border on August 31. She was detained at Hidalgo, Texas, then sent to an immigration detention center elsewhere in the state for four days. She ended up in a shelter in Virginia, finally traveling to Los Angeles to live with her mother, who she hadn’t seen since she was a baby.

While apprehended unaccompanied minors go through removal proceedings, it’s up to the US Office of Refugee Resettlement to find them shelter, usually with family and friends already in the country. Ideally, while these children fight their cases, they go to school, and access psychological counseling and other services to help with the adjustment.

“One of our staff members spent the weekend finding and getting to her client — who’s the mother of twins — a bunk bed,” she said, laughing with exasperation.

Public Counsel helps their unaccompanied minor clients apply for political asylum or for special immigrant juvenile status (SIJS). Building these types of cases is extremely complex and requires an attorney’s expertise. A child’s chance of staying in the US increases from 10 to 50 percent if she has an attorney present, compared to children without a lawyer, 90 percent of whom were deported as a result.

Children who experienced violence must share their trauma in detail, in front of a judge, in essence re-traumatizing them in front of strangers.

“For the children most harmed, who suffered the most sexual abuse, it takes a long time for an adult, much less a lawyer, to gain their trust,” said London. “And there may be severe mental health issues because of the trauma. Unfortunately, there’s no way to get asylum without being able to give pretty detailed information about what happened to them.”

Elena Fernandez said that St. John’s therapists try to ensure traumatized children do not have to testify in court before they’re ready.

Her agency is providing critical evidence that lawyers use to persuade judges to give children more time to prepare their asylum cases, such as a psychological assessment that would indicate what it would mean for a child to return to an unsafe situation in their home country.

“As clinicians, what we have to often negotiate with attorneys is ‘can we stall the legal work, can we postpone a hearing or reschedule it?’ Because the patient is not ready to testify or relive that experience,” she said.

Three weeks after she arrived in Los Angeles, Sandra had her baby. Her mother searched for a lawyer to help her daughter stay in the US.

Quinteros’s strategy was to seek asylum based on the persecution Sandra suffered on account of her membership in a particular social group, and the Honduran government’s inability to protect her.

Public Counsel now has more cases than ever before. However, this is still not enough, said London.

“The girl who gets to our office on Monday may get a lawyer but the girl who shows up on Tuesday but has been harmed in the same way may not,” London said, explaining that the US government is failing to provide due to process to minors without legal counsel.

“Every day in courts throughout the country, children represent themselves in deportation cases that are often more complex and more serious than most juvenile delinquency cases. The resulting adjudications are fundamentally unfair. Children are forced to admit or deny allegations against them, compile evidence in support of their claims to remain in the United States, and articulate legal arguments on their own behalf, when in reality they “are unlikely to understand the complex procedures they face and the options and remedies that may be available to them under the law.”

The suit, JEFM vs. Lynch, seeks to compel the government to provide all immigrant children facing deportation with adequate legal representation. The case is currently pending in federal district court.

“The real failure is in treating this whole issue of these Central American children as an immigration issue instead of a humanitarian crisis,” London said. “These kids have been terrorized, and they should not have to go through this system of whether you stay or go, whether you live or die, depends on whether you can access a lawyer.”

To London, it is not the trauma, but “the resilience of these girls” that is “most astonishing” about them. “They have survived extreme violence, yet remain determined to find a safe refuge and better life for their babies,” she says.

“The first questions these girls often ask our lawyers is: ‘How can I go to school here?’ And the next question is: ‘How can I find appropriate childcare for my baby so that I can get finish my schooling?’”

Two months after giving birth to her daughter, Sandra returned to school. This year, seven months after Public Counsel took on her case, she was granted asylum to stay in the US. Free from the constant worry of deportation, she is trying to piece her life back together in Los Angeles, concentrating on school and trying to find a therapist to deal with her trauma.

Back in Virginia, she briefly saw a psychological counselor.