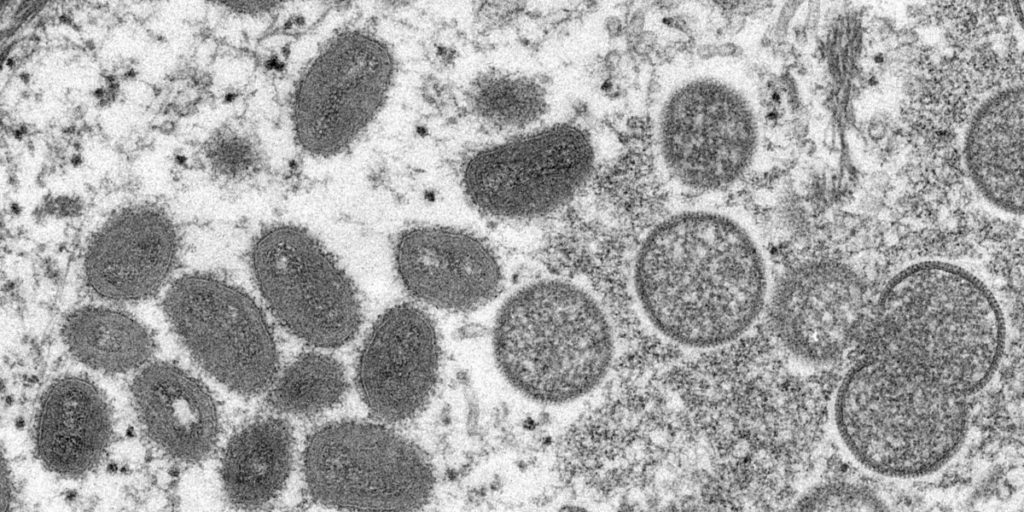 An electron microscopic (EM) image shows mature, oval-shaped monkeypox virus particles as well as crescents and spherical particles of immature virions, obtained from a clinical human skin sample associated with the 2003 prairie dog outbreak in this undated image obtained by Reuters on May 18, 2022. (Photo by: Cynthia S. Goldsmith, Russell Regnery/CDC/Handout via Reuters)

New Delhi: A monkeypox outbreak was reported from the UK last week. Now, not only has the number of cases gone up in the UK, at least six more countries are reporting either confirmed or suspected cases of the disease. India has so far not reported any cases in the current outbreak.

The other countries to have reported cases include the US, Spain, Portugal, Canada, Spain and Italy. According to the data compiled by Oxford University’s Moritz Kraemer, 67 cases have been reported globally in this outbreak (till May 19 evening).

The first two cases of the disease in the current outbreak were confirmed in the UK on May 7, 2022. The patients belonged to the same family. The first person had recently been to Nigeria; this is significant because regions in West and Central Africa are known to be endemic to the monkeypox (small outbreaks are often reported from there).

But newer patients from the UK don’t have any travel history. In a statement issued on May 18, the World Health Organisation (WHO) said the infection seems to be spreading “locally” in the country.

“The extent of local transmission is unclear at this stage,” the UN health body added.

The European Centre for Disease Control and Prevention (ECDC) said on May 19 that all outbreaks reported in the UK since 2018 had travel links with endemic countries. This was thus the first time that the cases were diagnosed “without known epidemiological links to West and Central Africa”. These were also the first cases, worldwide, which were reported in the MSM (men who have sex with men) community.

On May 18, the Massachusetts public health officials reported the first patient in the US. He is known to have a travel history to Canada. The Canadian health officials, as reported by CBC, are investigating 13 suspected cases in Montreal. The Spanish health authorities on May 18 said 23 people were showing symptoms related to the disease.

The health officials of Portugal also reported on May 18 that five people had been kept under observation. It is not clear whether they had any travel history.

Italy reported the first case of the disease on May 19 and two more patients suspected to have the disease are being looked after. The confirmed patient has a travel history to Spain’s Canary Island. Sweden reported the first case on May 19, with the health authorities saying they were investigating the source of infection. So, between May 18 and 19, at least six countries confirmed or reported suspected cases of the disease.

Not a new disease

Monkeypox is a viral disease and the symptoms of the disease closely resemble those of smallpox. Smallpox was eradicated in the 1980s. According to the WHO, monkeypox was first identified in a nine-year-old’s body in the Democratic Republic of Congo. Since then, cases have been reported from 10 more African countries.

This virus gains entry in humans through exposure to droplets of an infected person. Masks are, therefore, the key.

So far, there does not seem to be any evidence of airborne transmission of this virus. “The size of droplets is not that small that they can sustain in air for long and can travel afar. Therefore, there are hardly any chances of aerosol transmission,”  Sunit Singh, head of molecular biology unit at Banaras Hindu University’s Institute of Medical Science, said. Lalit Kant, a former head of the division of epidemiology at Indian Council of Medical Research, agreed with Singh.

The virus also has a possibility of sexual transmission and via surface materials that are contaminated.

While no agency or expert has a direct answer to many questions, including why there is a surge in cases now, all of them say that the outbreaks have been reported in the past too, outside Western and Central Africa. These occurred in countries such as the US, UK and Singapore. All these outbreaks were, however, sporadic.

One of the reasons that experts cite behind the resurgence of the disease is the waning generation that received smallpox vaccination. “This vaccination provided immunity, by and large, against the monkeypox, too. But after its eradication in the 80s, smallpox vaccination no longer remained part of the routine immunisation programme of the children,” BHU’s Singh said.

“As people who last received the smallpox vaccination are reduced in numbers, the monkeypox virus will get a chance to infect those people who have no prior protection, whatsoever at all. This gives the virus a much better chance to spread,” Singh added. In fact, the WHO’s May 18 statement also underscores this point.

There are two clades of the virus which cause the outbreak – the West African clade and Congo Basin Clade. While in the case of the former, the fatality rate is 1%, in the latter it can go up to 10%, which is considered very high. The draft results of genome sequencing from a case in Portugal came in late on Thursday evening. The results suggest that the virus, at least in the case of a Portugal patient, belongs to the West African clade. For the other cases, the genome sequencing efforts are still on.

Health authorities of all the countries where the cases have been found have said, in their statements, that the patients have been isolated and are recovering well.

The first classical symptom of monkeypox is fever after the onset of infection. It is usually followed by rashes that often start from the face and spread to other parts of the body. Headache, swollen lymph nodes and exhaustion are other common symptoms. But in most cases, the disease is self-limiting.

In 2019, the US Food and Drug Administration approved a preventable vaccine against monkeypox. However, it is not available for wider public use. The vaccine had demonstrated effectiveness against smallpox. Its effectiveness was inferred “from the antibody responses in the smallpox clinical study participants and from studies in non-human primates”.

An antiviral, Tecovirimat, is used for treatment of smallpox and monkeypox. It was approved in 2022. However, its availability is also very limited.

​​Unlike Sars-CoV-2, the virus responsible for the outbreak of COVID-19, the monkeypox virus is a DNA virus. Sars-CoV-2 is an RNA virus. “The RNA viruses are known to undergo mutations at a larger scale and also spread faster than the DNA viruses,” Kant said.

The ECDC said given local transmission of the virus in the UK, the likelihood of further spread of the virus through close contact, for example during sexual activities, continues to be “high”.

Both the experts The Wire spoke to and the statements coming out from various international health agencies do not predict very large scale outbreaks of monkeypox at the moment. “The patients have been isolated. The chain of transmission doesn’t seem to be continuing along,” Singh said, and added he didn’t expect monkeypox to take the shape of another COVID-19-like outbreak.