Sectarian violence in America is not fiction anymore 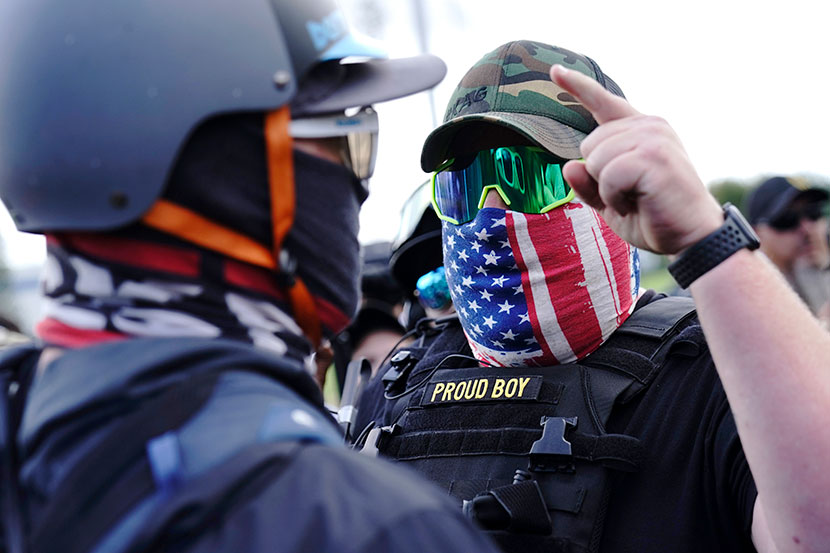 A member of the "Proud Boys" right-wing group confronts a counterprotestor at a Rally in Portland, Oregon on Sept. 26, 2020 (Photo by AP/John Locher)

It can happen here.

With so much fear and loathing in America and militias armed with assault rifles intent on “watching” the polls on the eve of the most fateful election in America’s modern history, we all need to face the reality that Sinclair Lewis’ frightening story for a frightening time may be unfolding right before our eyes.

When Lewis wrote his 1935 novel, “It Can’t Happen Here,” about the rise of a demagogue in America, he posed difficult questions through his protagonist Doremus Jessup who sees something terrible brewing in America: the potential for “a real fascist dictatorship.” Jessup, a small-town newspaper editor in Vermont, a “mild, rather indolent and somewhat sentimental liberal,” writes well-intentioned opinion columns that fail to stop the rise of a demagogue. He ends the book first going into exile, but then returning committed to a resistance movement.

This book by Sinclair, America’s first Nobel laureate for literature, has had a dramatic resurgence with the rise of Donald Trump. Within the first week of the last presidential election in 2016, it sold out on Amazon.com, and the sales are still going strong. We all want to believe that when the threat of fascism rises, we will do the right thing and confront it. But when it is happening in real time, history teaches us that it is much harder to see tyranny.

I first wrote about the frightening parallels with this book in 2018, and back then only offered the book as a way to pose hard questions, which a lot of readers felt were a bit melodramatic. I saw their point back then, but now it really does feel like we are on the edge of that dark moment that Sinclair’s protagonist tried to prevent, but couldn’t stop. Since then, GroundTruth has undertaken a global reporting project called “Democracy Undone: The Authoritarian’s Playbook,” led by my co-founder and Chief Content Officer Kevin Grant.

This series offered an early warning about the moment we are in by helping us frame it as part of a global trend in rising populist nationalism. The chapter dedicated to the U.S. focused on how Trump has waged his war on truth, mirroring tactics used by authoritarian leaders elsewhere around the globe to undermine America’s democracy. In the last 10 months, Trump has pushed his agenda even further, to the point where it feels like we are witnessing the rise of a dangerous demagogue. It really does feel possible that our bitterly divided country – fracturing along lines made more ragged-edged and fearsome due to spiking COVID-19 infection rates – could see an outbreak of violence. The International Crisis Group, which does extraordinary global research on conflict, especially around election violence, has for the first time in its 25-year history focused a report on the threat of election violence in America.

To be clear, we are talking about the plausible threat of a rising authoritarian regime and a sectarian conflict breaking out right here. It is time to wake up.

Indeed, the country seems to be already bracing for the distressing possibility of violence with businesses boarding up storefronts in New York and Washington; the Department of Homeland Security raising the threat level posed by Domestic Violent Extremists, or DVEs, and the threat they pose by intimidating voters at the polls; and National Guard units on alert in potential flashpoints across the country.

The possibility of violent clashes between well-armed opposing factions is already starting to pop off with a dangerous nod of the head by President Trump to some violent extremists.

There was his “stand by” order to the Proud Boys in the first presidential debate. And some observers are seeing symbolism in his choice to hit a final note of his campaign tonight in Kenosha Wisconsin, where two Black Lives Matter protesters were shot by a white 17-year-old radicalized on the internet by a militia movement called the “Kenosha Guard,” and the violent extremist group the Boogaloo Bois. There was also the alleged plot by a far-right militia to kidnap Michigan Governor Gretchen Whitmer, a Democrat who has imposed stringent stay-at-home orders to contain rising rates of COVID-19. While their plans were thwarted, militias seem even more emboldened at rallies – showing up with assault rifles and keeping Whitmer at the center of their extremist rhetoric, chanting at Trump rallies, “Lock her up!” In Texas, muscle trucks with Trump flags waving behind them swarmed a Biden-Harris campaign bus on a highway near Austin and menacingly and dangerously swerved toward the bus forcing it to slow down, based on a cell phone video by a nearby motorist. Federal officials are investigating the incident. Trump, however, retweeted the video with the words; “I LOVE TEXAS!”

Watching that video, it is hard not to feel the country is careening toward Election Day violence. Sadly, I have covered these scenes in struggling democracies and divided societies around the world like Kenya, Egypt and Myanmar and some of the same factors that played into the chaos there are present now in America.

In a recent virtual gathering of some of our Report for America corps members and community of supporters, the legendary Washington Post Editor Marty Baron spoke about this gathering threat, and specifically referred to his “fear of sectarian violence.” To hear an editor, who I respect greatly, with such solid grounding and measured judgment, express that concern really made me stop and think.

My co-founder of GroundTruth, the renowned photographer Gary Knight has also been thinking a lot about this rising threat in America as the head of an ambitious global project for the VII Foundation. The project draws on years of experience by Knight and a team of some of the best photographs and writers on sectarian conflicts around the world from Lebanon to Cambodia and from Northern Ireland to the Balkans. The sweeping body of work is culminating in a book titled Imagine: Reflections on Peace. Knight and his team offer keen insights on how much America has to learn from these sectarian conflicts of the past: from how quickly they can spiral out of control, to how much the violence becomes a force that transforms a country and frays trust for generations to come. His insights are sobering.

“Maybe we can provide something that will be as relevant to America now as they are to the countries that have experienced war like Rwanda and Bosnia,” Knight told GroundTruth in an interview at the launch of the project.

Knight said there were signs of factionalism emerging in America in recent months and he said if a life-long study of war and efforts toward peace has illustrated one thing, it is this: “If the factionalized communities in America really desire peace, you can make it work. If they don’t, they will have to go to war… When both factions feel they can win, they have no basis to try to find peace. The problem in America is both sides feel they can win. America is pulling itself apart, and none of us know where this is headed… It is really a leap of faith – until both sides have something to lose, you can’t start to build trust.”

What is abundantly clear as America heads into the most bitterly divisive and potentially violent election since the Civil War era is that we all have so much to lose. It’s not an overstatement to say our democracy is at stake.