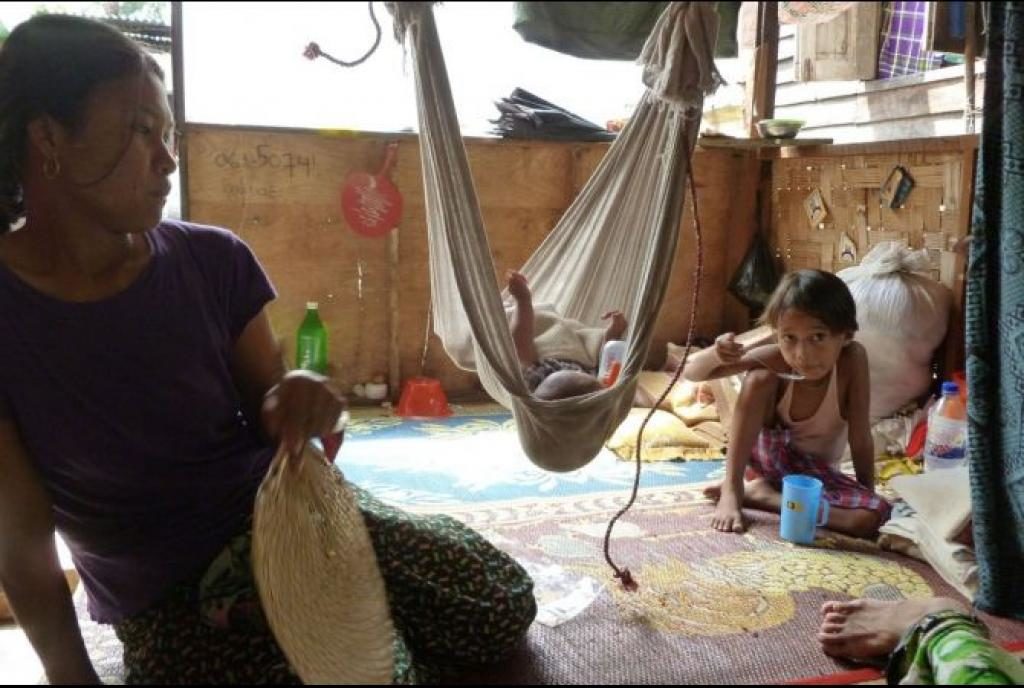 YANGON, Myanmar – Myint Myint Soe lies in a makeshift clinic, on a terrycloth cot, her body so light it barely makes an impression. The rainbow-striped cot looks like it belongs at the beach, and she says she would rather be home caring for her three young children. Instead, the 28-year-old mother rests her hand across her chest and stares at the ceiling as glucose drips into her system.

Myint Myint Soe has the HIV virus, but the disease hasn’t progressed enough for her to qualify for potentially lifesaving drugs.

More than two-thirds of people with HIV/AIDS in Myanmar need anti-retroviral therapy (ART) but cannot receive it because of a shortage of supplies and funds, according to the medical aid group Doctors Without Borders/Médecins Sans Frontières (MSF). This causes Myanmar to have one of the lowest coverage rates in the world.

“There is an enormous treatment gap,” Peter Paul de Groote, MSF head of mission in Myanmar, said in Yangon. “We send people home who are very sick. We tell them that if they are sicker and come back, maybe we can take them.”

Myint Myint Soe and her husband, a day laborer, borrowed money from friends to travel to Yangon to receive the drugs from MSF, Myanmar’s biggest provider of HIV/AIDS treatment. The government hospital in her township, Twan Tay, about 25 miles away, does not carry the drugs. But when she arrived in Yangon, MSF tested her and told her that she did not qualify. She was not sick enough.

She must go home and return once her situation deteriorates even further.

“I can’t take care of my babies,” she said at the clinic, adding that she wants to start the treatment and be a good mother again. “I want to stay happily with my family.”

In developing countries the World Health Organization recommends that patients begin ART if their CD4 count, which measures the immune system’s suppression of HIV and indicates how far the virus has progressed, falls below 350. The earlier a patient begins ART, the higher the chance for his or her survival and lower the likelihood of infecting someone else.

However, in Myanmar, MSF faces such a high volume of people requiring treatment and a limited capacity that it must prioritize the weakest. In Yangon it only gives ART to patients whose CD4 count falls below 150. Sick patients like Myint Myint Soe must wait and hope that they receive treatment before it is too late.

For many, the treatment never comes. Every year, 20,000 people living with HIV die in Myanmar because of lack of access to treatment, according to UNAIDS.

The junta that formerly ruled Myanmar for close to five decades arrested AIDS activists, blocked humanitarian activities and actively discriminated against those with HIV. It controlled information on anything that might make Myanmar, one of the world’s most repressive and impoverished nations, look bad – and that included information on HIV/AIDS.

“In the past there was a lot of difficulty working for HIV. Local authorities tried to interrupt me,” said Phyu Phyu Thin, who was briefly imprisoned for her activism and now runs clinics for HIV patients, including the one caring for Myint Myint Soe.

The junta began acknowledging the extent of the HIV problem over the past few years, and activists and humanitarian workers have been allowed to operate more freely. A reform-minded, quasi-civilian government took power in 2011 and allowed Phyu Phyu Thin to run for office.

The former political prisoner is now a member of Parliament.

Now, the problem is access to treatment and information.

Myanmar’s health care system suffered terribly under military rule, and this has had a direct impact on the care and medicine available to those with HIV/AIDS.

Myanmar has had “an extremely low, almost disinvestment in health care for decades,” said de Groote. “The state of the health care system is very fragile.”

Only two government hospitals in the entire country of nearly 60 million people provide complete ART services, according to Kyaw Hlaing, who has worked on health care in Myanmar since 1990 and with CARE for the past 12 years. Other hospitals can provide follow-up services.

Furthermore, the government only provides ART to people living in certain townships. Since every household must be registered with the government, officials can use that information to not serve patients from different townships, Kyaw Hlaing said.

“So people move to those townships to get ART,” he said.

There has also been a lack of significant funding to Myanmar from international donors because of concerns that money could go into the hands of the authorities and because of the junta’s restrictions.

“Relative to its population and income, Burma is one of the world’s smallest recipients of international assistance,” economist Joseph Stiglitz wrote during a trip to Yangon in March.

Some international funds that Myanmar had expected to receive also fell through when the Global Fund to Fight AIDS, Tuberculosis and Malaria cut funding worldwide. The group had planned to provide HIV drugs to another 46,500 people in Myanmar, according to Reuters.

As a result of the lack of capacity by the ministry of health and humanitarian aid organizations, of the 125,000 people in Myanmar who need ART, only 40,000 receive it.

There continues to also be a knowledge gap in Myanmar on HIV as well as stigma against those with the virus.

Inside Phyu Phyu Thin’s other clinic in Yangon’s South Dagon, San Thida sits on the floor of a small, dark room. A strong odor fills the air, and a mosquito net and poster of a Buddhist monk hang on the wall. With bony shoulders protruding from her t-shirt, a bald head and shriveled skin, San Thida looks close to 80. She’s 34. She greets a foreign visitor with kind eyes and a large smile that gives away a gap where her two front teeth once sat.

San Thida, who used to sit on the street in South Dagon selling food, said she never heard about HIV until she got so sick she could not eat and was bedridden for weeks. Her husband had already passed away, of a “stomach ache,” she said.

The bulk of women who have HIV/AIDS in Myanmar are from a low-risk population and contracted the disease from their husbands.

“This is like a second wave of epidemic,” CARE’s Kyaw Hlaing said. “Marriage is like a risk factor.”

With arms so skinny they look like sticks with veins, San Thida opens a bottle of ART and proudly displays the pills on her hand. She is happy to have the drugs, she said as she solicitously waved her small bamboo fan at her visitor. Her family only visited once, but she said she at least feels healthier.

The political situation is changing in Myanmar, and most are cautiously optimistic it will be for the better. The government has said it will quadruple its expenditures on health care and the reform process is expected to lead to more funding from international donors. Restrictions on humanitarian access are beginning to be loosened.

“Things are changing, definitely. There’s an opening you can see. What is important is will the opening affect the people of Myanmar,” MSF’s de Groote said.

For people like Myint Myint Soe, the hope is that the change comes quickly.

Health workers say what is needed now is more funding, more capacity by the ministry of health and organizations to treat HIV/AIDS patients and more collaboration between civil society, aid organizations and the government.

“The government has to take over these cases,” Kyaw Hlaing said. “No agency can guarantee we will provide for life.”