Sarajevo struggles to process its history of war 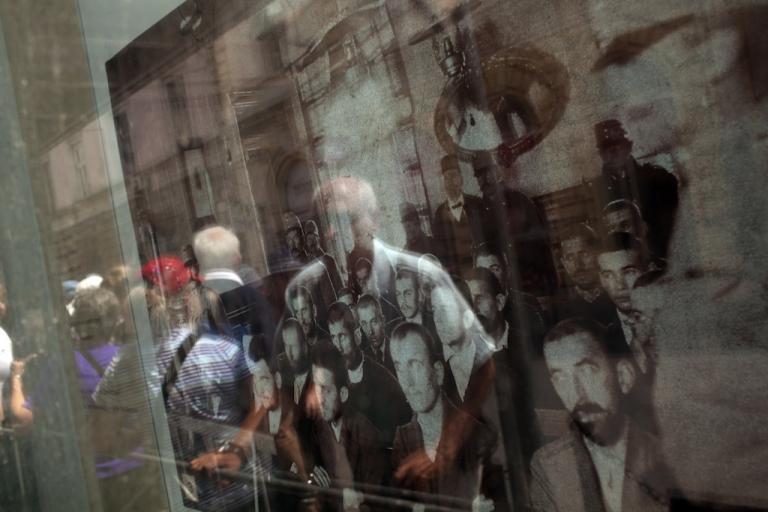 SARAJEVO, Bosnia and Herzegovina — The stairs that lead to the History Museum were cracked and crumbling and a guide gently warned visitors to step carefully as they entered.

A large stained glass window in the main foyer featured colorful panels, some of which were blown out by sniper fire two decades ago. The drab modernist architecture of the building dates back to the Tito era of the former Yugoslavia, and the beige, tile floors echoed with footsteps in dusty hallways that revealed a state of neglect.

On the second floor was a small exhibit of photographs and artifacts dedicated to the agonizing siege this city suffered from 1992 to 1995 when Sarajevo’s streets and this very building were in the crosshairs.

Then, Sarajevo was at the dead center of a horrific war in the Balkans fueled by ethnic hatred and triggered by Serbian nationalism. This city is still traumatized by that war, and still struggles with all the history that lurked within it and the legacy of a flawed peace process that has thwarted its recovery as a nation.

Now, broken pieces of that collective trauma seem to be resurfacing like shrapnel from an old wound here on the 100th anniversary of the start of World War I. It was here in Sarajevo that the war was set in motion on June 28, 1914 when a young Serbian nationalist assassinated Archduke Franz Ferdinand, heir to the Austro-Hungarian Empire.

That event touched off a political crisis that a month later would plunge the world’s great powers into “the war to end all wars,” as it was known. The conflict left 20 million dead, three empires in tatters and a map of the world that was redrawn in a way that still resonates here today where divisions between Serbs and Bosnians remain fresh.

There are World War I-related museum exhibits, concerts, peace gatherings and historical conferences here and throughout Europe this summer. And some of these remembrances have grown political with sharp dividing lines among the intellectuals trying to put them together, particularly the history conferences here in Sarajevo.

One Sarajevo conference entitled “The Great War: Regional Approaches and Global Contexts” intended to encourage historical exploration of the war and received a great deal of fanfare in Europe.

But before it even got started earlier this month, it was engulfed in a storm of controversy in the Balkans, according to a recent article in The Chronicle of Higher Education. The French scholars of the Sorbonne invited by the French Embassy insisted on a balanced forum in which Croats, Bosnians and Serbs to promote reconciliation. The Bosnian organizers from Sarajevo’s Institute for History, however, favored intellectual rigor than another reconciliation effort. The result was the French pulled out, the Serbs boycotted, seeing the conference as biased against Serbia and trying to rewrite history to lay blame for World War I on Serbia. The conference went on but its impact was diminished.

These days, residents of Sarajevo often complain of feeling paralyzed by their own history, and by the governing structures that were put in place as part of an agreement that was signed in Dayton, Ohio in 1995. The agreement effectively ended the war here with a federal system put over three separate federations for Bosnians, Croats and Serbs. But like the failed peace of World War I, residents and political analysts from all sides here say the Dayton Accord did not resolve the underlying issues and remains fatally flawed.

If the history of war is written by the winners, who writes it when everyone feels as they’ve lost?

It has been said that the history of war is written by the victors, but in the Bosnian war of the 1990s there were no clear victors. There was instead a peace process that created a stasis of three federations that are supposed to run their representative societies but which in effect have created a culture of dysfunction, according to observers and analysts from all sides of the conflict here.

The broken political process and the bitter politics of memory have both made it difficult for the director of the Museum of History to put together an exhibit to mark the centennial of the start of World War I. Less than two weeks before the June 28 anniversary of Franz Ferdinand’s assassination, the museum director Elma Hasimbegovic stared at a wing of the museum’s blank, white walls scuffed and dirty from the last exhibit which had recently been removed.

She waved her hand across the bleak, empty walls and tried to explain what she envisioned she might be able to put together to tell the story of the First World War and its local impact on residents of Sarajevo with some limited funding from the British Imperial War Museum.

“There is no funding to remember our history,” said Hasimbegovic, 34, a trained historian who cobbles together volunteers and any funding she can to keep the museum open.

“As a result, World War I is completely forgotten, erased from our history,” she said, lamenting that an absence of knowledge has led to some bitter and uninformed debates around the war.

The conflict 100 years ago shaped the geopolitics that eventually ignited long-dormant nationalisms and ethnic identities that some historians would argue led inevitably to the war in Bosnia and the siege of Sarajevo.

“This is all a history that is still alive and we are suffering from it,” she said. “We have to know it to make sense of any of it.”

She explained that after President Bill Clinton convened the parties to end the war under the Dayton Agreement. At that point, all national institutions became governed by federations and the national museums ended up in a cultural no man’s land. As if to drive home the point, the grand wooden doors of the National Museum next door had yellow police tape across the entry which reads “Shut down.”

It is closed due to a lack of funding.

Most of the physical evidence of war is gone, but memories still push clearly to the surface.

Buildings once battered by shelling, punched by mortar rounds and pocked by sniper fire, are mostly repaired. You have to look to see the newer patches of concrete and the replacement windows that cover the wounds of more than 20 years ago when this city was under siege.

But just about everywhere, the memories of war and the collective trauma suffered by all sides are evident and so too is a profound sense of resilience in a city that has much to share about lessons that war has to offer.

Walking through the city, Ibrahim Spahic, director of Sarajevo’s International Peace Center, pointed to young people gathered in cafes and shops filled with tourists who are slowly returning the once war-battered city. He stopped to smile upon one vignette happening at a small shop, where a tourist was buying a lamp fashioned out of an old mortar shell.

“This whole city is a living gallery of the memory of war,” he said.

At the museum gallery he has built dedicated to Sarajevo and to peace, known as the Chanukah Gallery, he served as guide to an exhibition on the bridges of Sarajevo and a reflection on how the bridges “symbolize the two sides of the conflict” but also “that which unites us and brings us together.”

“We have to think of all the living symbols around us, the bridges, the people, the way we live, on this anniversary of World War I. There is no funding for history museums here, no support from the government for memory here or from the international community. So it is up to us, we have to work ourselves to know the lessons of World War I and of the war in Bosnia to be sure we never repeat it. We have to build our own bridges.”

Sonja Beserko, who hails from Serbia and is a director of the Helskini Committee for Human Rights, came to the Sarajevo Peace Event 2014. She agreed that the citizens of the Balkans from all sides needed to work harder to reach out across the divide and learn to live together because, as she sees it, “the Dayton Accords have actually blocked the country rather than helped it to arise from the ashes and recover.”

Saying that the role of the United States and the European Union in ending the war and establishing rule of law has been indispensable, she hastened to add that the US and EU have not persevered in their principled solutions. By failing to persevere, she said, they have allowed room for ethnic tensions to resurface and in effect ratified an ethnically divided Balkans.

“Bosnia is a dysfunctional state — and less and less of a state as days go by,” she said.

She observed that the world seems cast along lines that feel very similar to the time before World War I. She explained, “The Ukrainian crisis — and the crisis in Georgia before it — is nothing but a scene of a new geostrategic struggle for the control over the unregulated, polycentric world. The same goes for the Middle East and Central Asia. It is the tension between big powers, old and new, that defines today’s world.”

“It is against such geostrategic context of today that we need to interpret and understand not only World War I but also our last war.”

At the Sarajevo Peace Event held June 6 through 9, Verdiana Grossi, a prominent Swiss peace activist, delivered an address at the opening ceremony to a gathering of hundreds of peace activists and scholars from around the world directly addressing the living memory of World War I and the tensions that still surround the way it is taught.

As she put it, “Show me how you teach history and I will tell you who you are.”

Vanja Nedic, 25, complicates that equation as a child of a mixed marriage with a Serbian Orthodox father and a Croatian Catholic mother. She came of age as a child in Vukovar which in 1991 suffered one of the earliest and most fierce battles of the Balkan wars. Through the subsequent years, Nedic’s own mixed identity gave her perspective on the flawed teaching of history by both sides, and she said she has witnessed how most teachers simply avoid teaching the lessons of World War I or about the event of the war she lived through in the 1990s.

“We were taught to memorize the order of the pharaohs of ancient Egypt, but we just skipped right over the events of June 28, 1914 and the events that led to war. And we don’t even touch the history of the Bosnian wars even though it shaped our lives and is still shaping our future,” she said.

Explaining that schools are still divided in her hometown of town Vukovar, she was placed by her parents in a Serbian school. The experience radicalized her and she has worked hard for reconciliation between the ethnic factions of Bosnia. She is now involved in helping to build the curriculum for a mixed school and is hoping it might open its doors soon, although for now it is locked up in local politics.

“I will keep trying,” she said, meeting over coffee during the June peace conference in Sarajevo she attended. “We have to find a way to learn together and to know our own history so we are sure we do not repeat it again.”