An environmental tragedy on the Greek island of 50,000 goats 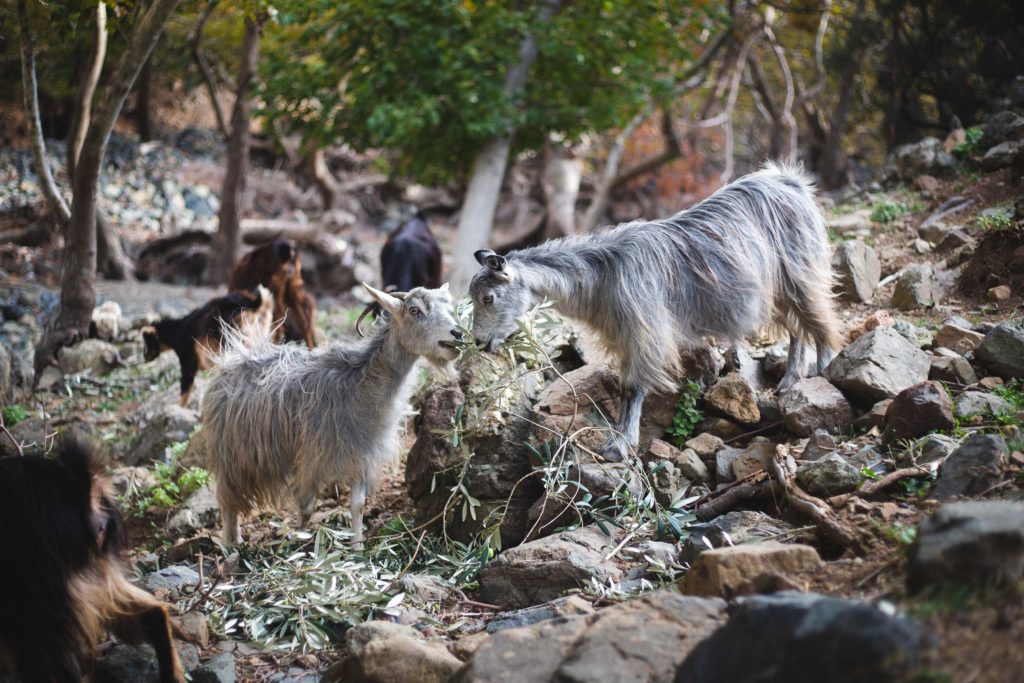 During the olive harvest, goats immediately rushed in to take advantage of the food that they can't normally reach. Most of the olive trees have sharp sticks attached to their bases to prevent the goats from climbing into them. (Photo by Jacob Chang-Rascle/GroundTruth)

The phrase “Greek island” often evokes images of pristine white beaches, idyllically peaceful villages and stunningly clear water. While Samothraki, a Greek island in the northern Aegean sea, partially fits this description, it is also home to a unique ecological disaster. A relatively small island of 68 square miles, Samothraki has mostly escaped the attention of mass tourism and is home to less than 3,000 inhabitants. Strangely, it also hosts a staggering 50,000 goats, most of which are “semi-wild” and roam freely. The results of this ecological imbalance, fueled by questionable governmental and local decisions, are coming back to haunt the people of Samothraki in a dramatic fashion.

The issue began decades ago when the European Union created an overly high subsidy that encouraged the ownership of goats. With the purchase of each new goat, shepherds were eligible for a yearly sum of money, regardless of whether or not they produced anything with the goats.

As a result, many people across the island, even non-shepherds, purchased many more goats than they could realistically manage. Rather than spending money on food for their goats, many shepherds just let their animals roam, eating whatever plants they found in the surrounding land.

In the 1990s, it is estimated that 70,000 goats inhabited the island. Today, that number is probably closer to 50,000. “I’m afraid no one really knows and I’m afraid no one really cares,” said Ilkka Vierinen, when asked if the goat population was rising or falling. Vierinen co-runs Project Greenflow, a local eco-project that aims to set the example in sustainable goat management.

The overpopulation of goats is creating an ever-worsening crisis for the island ecosystem—desertification. In areas with the densest goat populations, huge swaths of land are now completely void of plants, unable to withstand their constant nibbling. With no plants to hold the soil, Samothraki’s mountainous terrain is at the mercy of erosion in every downpour of rain.

Chora, Samothraki’s capital, is situated under Mt. Saos, the island’s largest mountain, and is the most impacted village of the island. In 2017, a huge storm and torrential downpour turned its streets into rivers, damaging or destroying countless homes, businesses, and even part of the city hall. The island’s only health clinic was also destroyed, which remains nonoperational to this day.

Though such a natural disaster might seem far removed from the goats, it is their role in the desertification that allows the rainwater to pick up speed along the mountainsides, gathering soil and rocks along the way. This mix of water and soil eventually slammed into the village below, nearly drowning multiple civilians, both in Chora and in cars along the roads. Unfortunately, this risk of flooding and erosion seems unlikely to improve, as the goats continue to consume the ground vegetation around Chora.

Besides the danger to human life and property, the beauty of the island has also been significantly reduced in many areas. Hillsides that used to be covered in vegetation and trees are now decorated only by dry, loose soil and rocks. “Some of the older people here, they get tears in their eyes when they’re reminiscing about how it used to be,” confessed Hatem Gramy, co-founder at Project Greenflow. There seem to be no simple solutions to the goat problem, and much of Samothraki’s population seems to have lost hope of solving it any time soon. However, the Sustainable Samothraki Association has begun fighting to designate Samothraki as a UNESCO Biosphere reserve. Should they succeed, it may be a step in the right direction towards solving the island’s ecological crisis.

Photographer’s Note
When I first arrived in Samothraki with Annalee Durland-Jones, neither of us had any idea of the island’s goat troubles. As we worked with the Project Greenflow, we were quickly introduced to the island’s recent history of goats and erosion. I found it to be an intriguing issue for a number of reasons. Firstly, I find goats to be somewhat comical, silly creatures, and I found the idea that they could indirectly wreak such havoc on humans almost absurd. Secondly, it occurred to me that this ecological imbalance somewhat mirrors many of the global environmental struggles that we face today. In Samothraki, poor governmental and local decisions for short-term gain were made, without considering the long-term impact, which eventually came to far outweigh the initial benefits. Sound familiar? To me, the story felt like a small scale parody for the looming issue of global warming, along with a number of other environmental issues.

Once I decided to create a photo story of the situation, I was horrified to discover that I had lost my camera charger in our travels. Luckily, I still had one full battery. Over the course of our two-week stay, this limitation forced me to be incredibly selective with what I chose to shoot. Photographing the goats was also much harder than I had anticipated. As they are “semi-wild,” any attempt to approach the goats generally resulted in them scattering back into the hills or olive groves. Because of this, I was forced to wait for long periods of time, sometimes over an hour, just for the goats to get into the right spot for me to photograph them. On one occasion, I was lucky enough to find a goat with its head stuck between walls, where it was forced to be my photo subject. (It escaped eventually.) It should be noted that not all of the island suffers from the problem of goat-driven desertification. On trips to the other parts of the island, we were blown away by the lushness of the vegetation and forests. These areas, far from the onslaught of the goats, seemed almost to be in a different world. This juxtaposition really made us realize the extent to which the goats have altered the landscape around Chora.

Another surprise came when I began to understand the true extent of flood damage in Chora. Although I had already visited the capital multiple times, it wasn’t until my last visit that I began to peer through the dark windows of the closed storefronts and dilapidated houses. The first time I did this, I was completely dumbfounded to find one of the eeriest scenes I had ever witnessed. An abandoned room, covered in debris and old clothing, had a doll lying in the middle of the room, staring blankly at the ceiling. It almost looked like something out of a horror movie. The image is included in the series above. As I looked more closely, many buildings that appeared only mildly rundown on the outside were actually completely demolished on the inside.

I truly hope that in the coming years, a solution can be found to begin reversing the goat-driven erosion and start the slow process of restoring balance to the ecosystem in Samothraki.