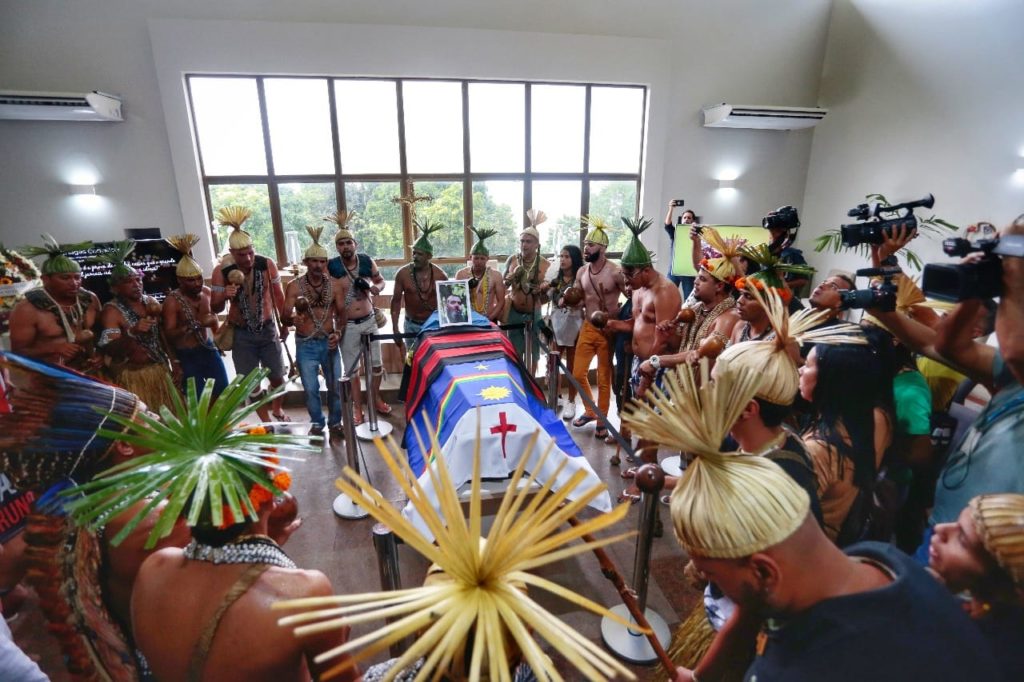 Xukuru indigenous people traveled to attend the ceremony and paid their last respects to Pereira. (Photo by Arnaldo Sete/MZ Conteúdo)

Editor’s note: The funeral of Bruno Pereira, an expert on Indigenous peoples who was killed alongside British journalist Dom Phillips during a reporting trip to the heart of the Amazon rainforest, was held in his home state Pernambuco last week.

Pereira and Phillps were murdered in the Javari Valley, close to Brazil’s border with Peru and Colombia, sparking outrage and condemnation around the world, as the case is the most recent chapter of a long and violent conflict in the region.

As the BBC reported, the area in which they were traveling has become known for illegal fishing, mining, logging and drug-trafficking activities. “It is also known for violent conflicts between these various criminal groups, government agents, and indigenous people. It was these conflicts that Mr. Phillips and Mr. Pereira were documenting.”

The police have arrested four suspects, but the investigation continues as activists and indigenous communities claim the murders were ordered by one of the multiple criminal organizations that operate in the region.

Read the original in Portuguese: https://marcozero.org/lagrimas-de-tristeza-e-revolta/

The body of Bruno Pereira, a Brazilian expert on Indigenous peoples who was killed with British journalist Dom Philips during a work trip to the heart of the Amazon rainforest, was mourned in his home state of Pernambuco in Brazil on June 24.

Family members and indigenous groups gathered to honor Pereira, who lived in Pará State with his wife Beatriz Matos and two children and used to travel often to work in the Javari Valley, in the Brazilian Amazon.

As soon as the memorial started, Xukuru indigenous people from the Serra do Ororubá, who live in the countryside of the state, arrived at Morada da Paz cemetery marching and chanting.  “Oh my brother, oh my brother. Where is my brother who doesn’t come to play anymore?,” sang the Xukurus while swinging their percussion instruments. The chant continued as they approached the sealed coffin. Pereira’s parents and wife watched the tribute with great emotion.

“We could not miss this day here, representing all those who could not come to say that Bruno and Dom live in each one of us,” said indigenous leader Marcos Xukuru. Marcos’ father, Chicão, also gave his life in defense of indigenous communities. He was killed in May 1998 in a case related to the Xukuru advocacy for land rights. “Today I would like to say to Bruno what my mother told me when my dad was murdered: he won’t be buried, he will be planted, because from him other fighters will be born.”

After the ritual, Eriberto Marubo, from the Observatory for the Human Rights of Isolated and Recently Contact Indigenous Peoples (OPI) turned to Pereira’s parents. “Today he (Pereira) belongs to all indigenous people. You guys have a son who was our hero”.

Following the speech, indigenous leader Marcos put an indigenous headdress on the sealed coffin. The hat was made of wine-palm straw, one of the most sacred local materials. Pereira’s passion for the Sport Club Recife soccer team and the pride of his native land were part of the ceremony. Pereira’s coffin was draped with flags of Pernambuco and his soccer team.

After a religious ceremony, other indigenous people, from the Pankararu, arrived to honor Pereira.

A loss with multiple meanings

Along with the funeral, OPI released a note of “sadness and outrage”: “Today we bury Bruno, our oldest brother. Today the land where he was born receives him back; his body meets the earth again, the roots, the water, and the land’s warmness. His body holds the sea salty perfume and the dense fragrance of the forest he fought for until the land predators treacherously murdered him. In our eyes, there are tears of deep sadness mixed with intense outrage,” they wrote.

The note also conveyed a clear political message, reinforcing the idea the indigenous expert left a legacy of resistance: “Bruno had an immense passion, an emotion that he made overflowing to so many people from so many places: he knew that in the heart of the forest the isolated indigenous peoples launched their cry of refusal against the invading violence. The voice of isolated indigenous peoples, of those who barely survived our massacres and pestilence, echoed around the world because Bruno spread his desire: the desire to leave them in peace, without the State bureaucrats, without the uniforms of soldiers who wield weapons, without the sacred crosses of the missions of death, without the false gold shine of insatiable capital.”

The family didn’t give interviews but wrote a note that was read by Pereira’s sister-in-law Thamy Rufino. “The family is saying goodbye to Bruno with a heart full of gratitude for having had him in our lives. Bruno’s life was one of courage, dedication, and fidelity to the indigenous cause. Bruno had a mission, enlightened his cause, and took it to the world. At that moment and throughout the last week, indigenous people from all over the country performed rites of passage in honor of him. We thank you all. To family, friends, indigenous people and to all the people who prayed, searched, worked, and represented Bruno, we are eternally grateful. May God in his immensity repay everyone and their families. Now, we are dedicated to love, forgiveness and prayer. Thank you.”

A legacy of resistance

Jurist and professor Manoel Moraes, coordinator of the Dom Hélder Câmara Chair at Unesco/Unicap, was emphatic when stating that the murderers’ arrest does not mean that justice is done: “It is very painful. We try to find some comfort in the tributes made by the indigenous people, but the fact is that the case has yet to be investigated it is very important that the Federal Police and the Brazilian state can bring effective evidence of who ordered Bruno Pereira to be killed, this has not yet been answered. There is very little for you to believe that the crime was motivated by a local issue, it was not a local issue, it was a crime driven by international interests.”

Renato Athias, from the Brazilian Association of Anthropology, highlighted how important Pereira’s work was. A friend of Pereira, Athias has extensive experience working with indigenous peoples on the border with Colombia, where he develops preservation and inspection projects on indigenous lands.

“The work that Bruno was developing at Javari was a very important pilot project, not only for georeferencing the region but also for defending the territorial heritage of the lands, and it was fundamental,” he said. “Bruno’s work will not stop, on the contrary, new possibilities for the visibility of this work will emerge and all anthropologists are committed to continuing the project and ensuring the inspection of Vale do Javari, which is completely threatened by miners, loggers, and companies mining companies, and an invasion that was carried out thanks to the closed eyes of the Ministry of the Environment and Funai (the government agency for indigenous affairs) itself”.

British journalist Dom Phillips’s memorial was held on the following day, in Niteroi city, near Rio de Janeiro. Phillips was a contributor to the Guardian newspaper and was writing a book on the Amazon. Pereira was serving as his guide and had previously received multiple death threats for his work advocating for indigenous rights. They went missing the morning of Sunday, June 5, and their bodies were found 10 days later.

As The Guardian wrote in an editorial, the killing came amid growing violence against environmental defenders and journalists: “Brazil is one of the most dangerous countries for land and environmental defenders, with 20 having died in 2020, according to the watchdog Global Witness, which warns that killings are rising across the global south. Colombia saw 65 murders that year; Mexico another 30; and there were 29 in the Philippines where, as in Brazil, an authoritarian president has dismissed human rights and environmental concerns and embraced corporate interests.”

The police arrested four fishermen from nearby communities and said that two of them confessed to the murders. At least four others who helped hide the bodies have also been identified. The case is still under investigation.

This story was produced with support from Report for the World, a The GroundTruth Project‘s initiative.