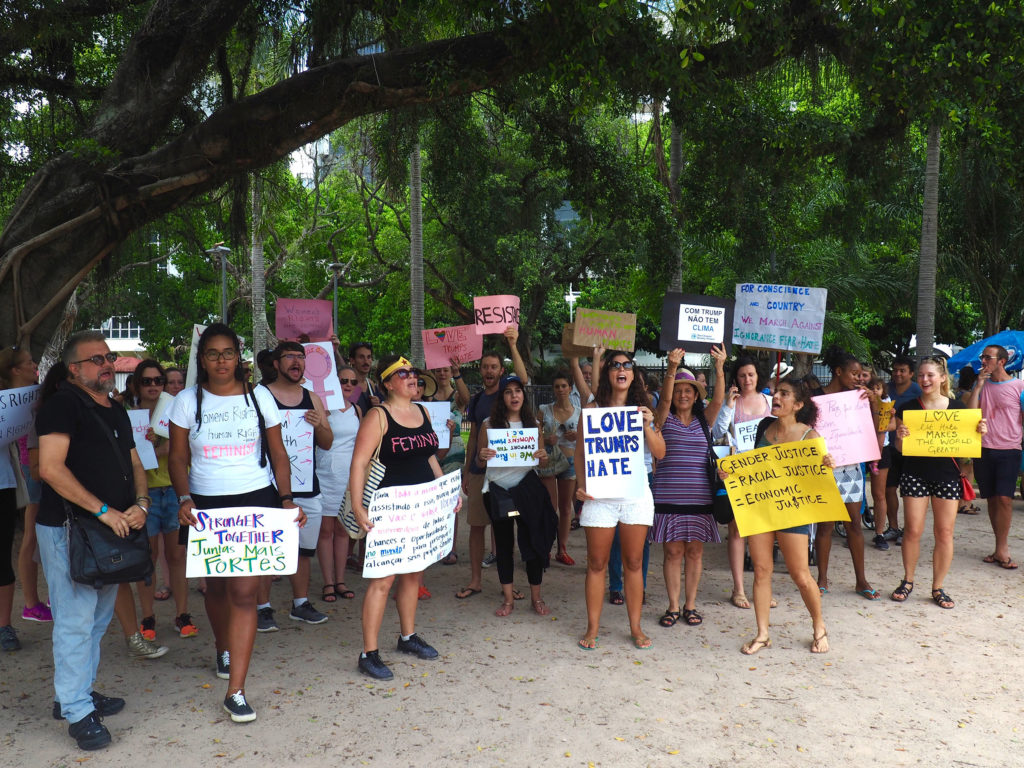 RIO DE JANEIRO — A glitter-covered protester on stilts, in the style of Rio’s upcoming carnival parades, led the city’s Women’s March through a plaza in Ipanema neighborhood on Saturday before it headed to the beach, shouting “Love Trumps Hate” and earning cheers from passersby.

Rio’s around 150 protestors included families, children and vacationers and expats, and hailed from Brazil, the United States, Argentina, Russia, Venezuela and England. “It’s a scary time,” said British filmmaker Sian Green, who is based in Rio. “Ever since Brexit I have been thinking about how if we want things to change, we have to get moving.”

Brazilian psychologist Lilian Bosboom marched because “the climate is a global issue, and Trump is scaring the world with his ideas.” Bosboom participated in the Rio+20 climate conference here in 2012. “He and other leaders aren’t leading,” she said, “so the population need to step in now.”

Rio’s protest was organized by Lee Weingast, a teacher and translator from New York who saw news of global “sister marches” online. Carrying a sign that said “Gender Justice = Racial Justice = Economic Ju$tice,” Weingast opened ceremonies encouraging protesters to “use this march as a jumping off point for real, very doable activism to come.”

Corey Watlington, the American administrator at a local international school, appreciated that Weingast shared the march guidelines calling for intersectional activism. “True solidarity means standing with people as diverse as our country,” he said.

In addition to worries about global warming and weaker economy in the face of U.S. isolationism, many Brazilian protesters were frightened by what Brazilian marcher Mariana Cabral called Trump’s “anti-woman, anti-gay, anti-minority discourse of hate.” It acts as a gateway, she said, to such behavior from Brazilian politicians “who see America as a reference. And the Brazilian right has been growing in the past year with many figures speaking exactly in this way.”

Cabral, who presents a cultural show on television, carried a sign denouncing both Trump and Brazilian congressman and likely 2018 presidential candidate Jair Bolsonaro, known for his praise of Brazil’s military dictatorship and claim that a fellow congresswoman “didn’t deserve to be raped.”

The United States’s shocking election results came at the end of a tumultuous year in Brazil, in which a recession and tide of anti-political sentiment on the streets helped support the impeachment of center-left president Dilma Rousseff. She was replaced by a new government that is corruption and controversy-laden by any measure. Pablo Ortellado, a University of São Paulo political scientist who studies activist discourse on Brazil’s left and right, said in an interview that one common thread in recent power shifts in both Brazil and in the United States is “the ability of right-wing new media operations to create political power.”

In Brazil, countrywide marches that called for Rousseff’s ouster were in part organized by a group of young libertarian men with a YouTube channel and ferocious social media presence called the Free Brazil Movement. Trump earned praise at Free Brazil’s end-of-year conference for his ability to bypass the traditional media in connecting with voters.

Free Brazil organizer Kim Kataguiri told me in an interview their success is partly because “over the years, the Brazilian left lost its strength at material discourse” – the ability to explain clearly what policies make people richer or poorer – “in favor of focusing on aesthetics.” “Know your narrative,” their conference instructed, and by pushing a narrative that government is the problem and shrinking it, the solution, they helped usher in a president whose new austerity package a UN rapporteur says “will place Brazil in a socially retrogressive category all of its own.”

“Trump’s election validates Brazil’s growing right,” said Cabral at the protest. “Fighting back to all of this will mean not just demonstrating, but sustained activism that includes putting progressives in spaces of power.”

Brazil had municipal elections in October, and although conservative candidates hauled in the wins, so too did a handful of progressives who made the transition from social movements to elected office. One is teacher Talíria Petrone, who now goes to work in a city council building that she helped occupy as a protestor in 2013, when nationwide protests inspired by a bus fare hike and campaigns abroad like Gezi Park and Occupy Wall Street rocked the country.

“We made a point to fight for policies that centered black women, trans people and working people,” said Petrone in an interview. “For people to believe again that being political is worth it, we need to be honest with them.”

Petrone became the most-voted councilwoman in Rio’s conservative neighbor city of Niteroi, but her leftist party remains small nationally. Says Ortellado, “new media-powered forces on the right in both Brazil and the United States have shown they have the ability to destroy opponents. It’s still to be seen whether they can create a sustained political project.”

Ana Aguilera, a Venezuelan graduate student who participated in Rio’s Women’s March, says transnational activism has potential to build power of its own in 2017. “As women, we’re willing to act right now because we want to guarantee that there are choices for all of us. Not just for Americans, and not even just for women. If we don’t fight, we won’t be able to make choices about our future.”