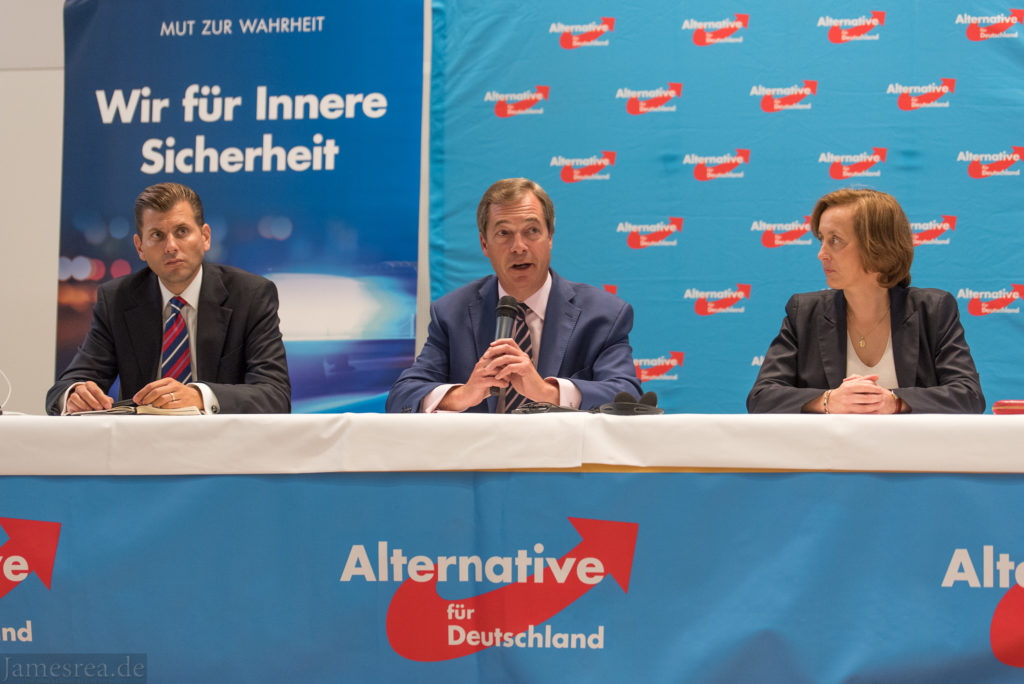 Leaders of the right-wing populist party Alternative for Deutschland (AfD) on stage with Nigel Farage, former leader of the UK Independence Party, on September 8, 2017. Farage endorsed AfD ahead of the parliamentary election, saying, "Once you are able to speak the unspeakable, people will begin to think the unthinkable." (James Rea/Creative Commons)

BERLIN — The right-wing populist party Alternative für Deutschland (AfD) won just under 13 percent of the vote in Germany’s federal elections Sunday, marking the first time in more than 50 years that a far-right party will sit in the German parliament.

“We have come to stay,” AfD’s Alice Weidel, one of the party’s two leading candidates, told supporters at AfD campaign headquarters in Berlin Sunday night.

That AfD is entering the Bundestag is not a surprise: polls and electoral projections have throughout 2017 showed that the party would receive at least the 5 percent necessary to hold seats in the parliament. Founded in 2013 as an anti-Euro party, AfD capitalized on anti-immigration sentiment in Germany in the wake of the 2015 refugee crisis to quickly build its support.

Through a series of strong showings in state elections — to the tune of 20 percent or more in some states — the party continued to raise its profile, and currently is represented in 13 of 16 of Germany’s state parliaments.

The day before the election, AfD candidate Georg Pazderski told me that becoming the third-strongest party in parliament would be a “very good result” for the AfD, particularly given how new it is. Pazderski and a handful of other AfD members were campaigning in the Berlin neighborhood of Prenzlauer Berg, handing out flyers and AfD-adorned lighters and beer coasters.

“The AfD is a party that’s only 4.5 years old,” he said. “Never before has a party gained so much support from the electorate so quickly … voters are waking up.”

AfD’s newfound presence in the federal parliament — and as the new third-strongest party in Germany — is significant, particularly here. As right-wing populist parties have seen rising support and electoral success across Europe, Germany, with its Nazi history, was seen as more resistant than other countries to the influence of the far right.

AfD’s results on Sunday, which were even higher than the 10 or 11 percent most polls projected they’d receive, are a signal that their anti-establishment, anti-immigration rhetoric has resonance among some of the German electorate.

Yet a majority of Germans still strongly oppose AfD and its message. Asked for exit polls about the party’s potential inclusion in parliament, 69 percent of German voters said it is a “bad” thing that AfD is entering parliament. That sentiment was on display Sunday night as hundreds of protesters arrived outside AfD’s headquarters, chanting, “Nazis out!” and “Racism is not an alternative!” and forcing AfD leaders to leave out a back entrance.

Unlike in some other European countries where the rise of far-right parties is fueled by young supporters, AfD’s voters tend to be a bit older. Exit polling data released by German broadcaster ZDF found that the CDU was young voters’ top choice: 25 percent of voters under 30 opted to support Merkel’s party.

The AfD, won 11 percent of this demographic, slightly lower than the overall average. The party’s biggest base of support came from those aged 30 to 44 (among whom 16 percent chose the AfD) and those aged 45 to 59 (15 percent for the AfD). AfD’s supporters also come disproportionately from states in former East Germany: in Saxony, the party was virtually tied for first place with the CDU, garnering just under 30 percent of the party list vote there.

Entering parliament comes with a handful of important advantages for the AfD: in addition to having a bigger platform with which to push their agenda, the party will also receive money to pay staff, federal funding for future elections and can also initiate parliamentary investigations.

“Now that we’re obviously the third biggest power … the government has to buckle up. We will hunt them,” he said. “We will hunt Frau Merkel … and we will reclaim our country and our people.”

Most of all, AfD’s entry into the German parliament gives it a legitimacy and perhaps a social acceptability that it thus far has lacked — no small feat in Germany, where the far right has long been stigmatized and seen as outside the realm of acceptable political options.

Christian Buchholz, an AfD member of the Berlin state parliament, told me Sunday’s result will change that.

With every seat the party won in local parliament, it became easier for people to admit they supported the AfD, Buchholz said, “and with the Bundestag it will get even easier.”