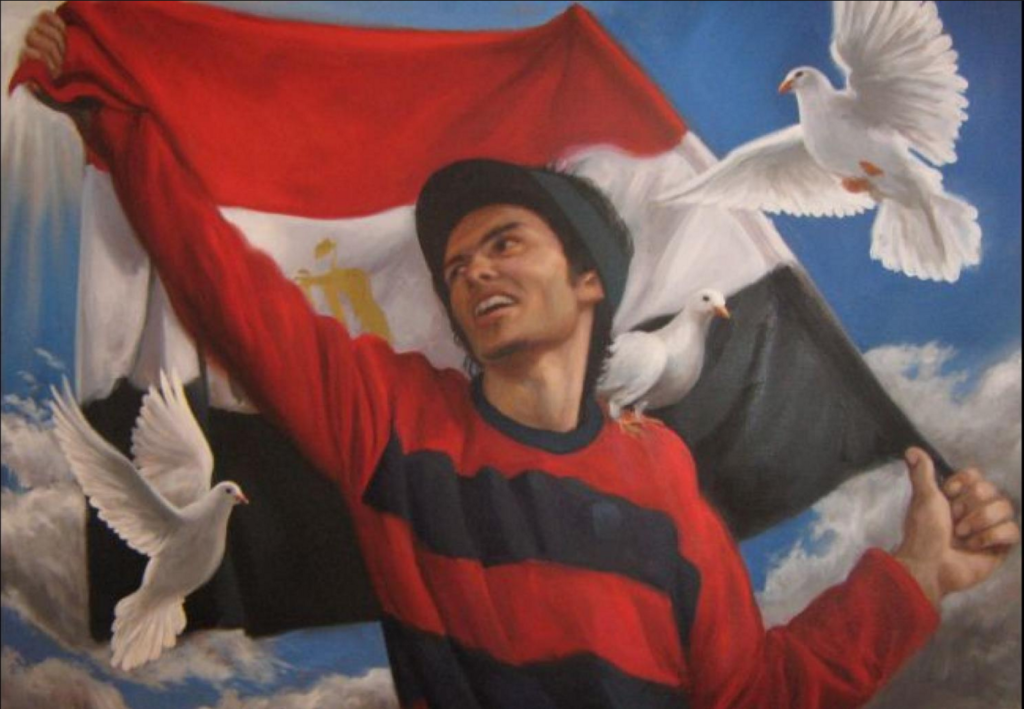 CAIRO, Egypt — Five years ago, long before Egypt’s January 25 Revolution broke out on Police Day in reaction to alleged brutality and corruption by the force, a young artist named Hany Rashed found his muse in painting policemen in white uniforms.

One canvas portrayed a policeman with his back turned. This particular acrylic painting became a poster announcing a solo exhibition entitled “Faces of Egypt” at a downtown gallery in Cairo.

A state security officer saw the poster and called Rashed at home to invite him over for a cup of coffee at the state security building. He wanted to know what the story behind the art was.

“Are you implying that the policeman is turning his back on society?” the officer asked him.

“No, no, he’s just a face among many others I chose to paint to represent Egyptian society,” said Rashed, 36, recounting his interrogation.

“No, no, stick to painting belly dancers and pretty ladies,” the official advised.

Rashed complied. His terror of the possible repercussions kept him from taking the risk. Like many others who received curious phone calls about their art over the past few decades, he chose not to dabble in politics for fear of police retaliation. For five years, the artist strayed away from artful political
satire. He traveled through Europe, painting life in Sweden and exploring Italy’s cultural dynamics in his art.

But on January 25, Rashed shed his fears and risked his life. “In Tahrir, we wanted freedom, not bread,” he reminisces. “Hunger is easy, unlike the inability to express yourself.” Rashed, who went hungry for years, knows firsthand.

From the start, Tahrir Square was brimming with artists desperate to break free. The Square emerged as a culture hub in a state of turmoil.

Today, Rashed sits in his studio in Maadi, paint cans lining the wall, hungry for inspiration. “I don’t know what to paint at the moment,” he says. In this period of political uncertainty, artistic energy fluctuates as it attempts to capture people’s turbulent emotions synchronized with a revolutionary pulse. But at least it moves.

Like the stifled political arena in the era of Hosni Mubarak, art was constantly under close scrutiny. Artists were forced to either wrap their socio-political reflections in elaborate symbolism or to stop working altogether. So when freedom overflowed in Tahrir Square in January and February, art swiftly claimed its place in Egyptian society.

But much of the initial revolutionary art was blatant documentation of Tahrir events, devoid of conceptual refinement. Artists in Cairo have now suddenly experienced a surge of freedom. While the pre-Tahrir era was inhibiting, it drove artists to find creative ways of cryptic expression. Artists confess that they are unsure about how exactly to use their newfound freedom. Most of the artwork emerging in the Square onwards is overly literal. In galleries across the city, the Egyptian flag figures heavily as Tahrir Square photography raids their walls.

Despite the art scene’s apparent dynamism, the melancholic uncertainty pervading the public is trickling down into the arts. Many artists are delving into activism, trying to ensure change through art. For them, freedom is as essential as bread is to the layman. And having tasted it once, they refuse to let it go.

Four galleries have opened up since January 25, their curators are keen on showcasing young talent, mirroring the revolutionary landscape.

“Freedom always changes art,” says established contemporary artist Mohamed Abla. He set up art workshops for children in the Square during the 18-day uprising, and his career has been bedecked with artistic endeavors to encourage young artists. “Art flourishes with freedom,” he says.

Abla believes that contemporary Egyptian art is more youthful and less formal, with young artists and graffiti taking the lead. “It’s true that the structure of art is still vague, but change is activated.” Abla does not deny that struggles are inevitable as the road to freedom unfolds.

Art can be engaged to unify ideologically scattered people in the face of political tensions, says Mohamed El Sawy, director of arts hub El Sawy Culture Wheel. “Art can change realities,” says. He believes that Egyptian culture was in the shadows for over 50 years, while art was considered a form of deviance. “Ordinary citizens did not feel that they could express themselves.”

But in revolutionary Cairo, art is not restricted to artists — Tahrir has made an artist of the man on the street, who equally revels in freedom.

El Sawy believes that closing the gap between art ad the people is the only solution for Egypt to develop. Today, people draw on pavements and spray paint on walls. “A cultural revolution is coming,” El Sawy predicts. “But that will happen as the political scene settles down, and we have to keep going.”

Filmmaker Wael Omar launched Radio Tahrir on February 11 as a reaction to Mubarak’s ouster, pouring life into a project that gave voice to the masses. But as the voices subside, Radio Tahrir wanes. He tells the story of fleeting euphoria and looming melancholy, of a landscape in burgeoning color that turns to grey.

Everyone was easy to motivate at the dawn of revolution, Omar recalls. Amid revolutionary fever, the station had clear direction. But by time, it was “hard to keep everyone on ship.” Effort dwindled. The economy being in such a tough spot post revolution, Radio Tahrir was challenging to sustain.

“We used to brand ourselves as the heartbeat of the revolution,” he said. “And now there is no heartbeat.”

Before the revolution, artists were not given the freedom to create and steer creative life. “None of us were used to working this heart,” says Omar.

“Before Jan. 25, any flower that bloomed too high off the field needed to be cut,” he says, slicing the air with his fingers.

Contrasted with years of restrained creativity, revolutionary Egypt rumbles with art. Omar now describes himself as an “artivist,” combining activism with art even as the revolutionary pulse drops pace. But the “artivist” is often overwhelmed with the feeling that “a million forces are working against you every single day.”

Like a painting in the making, colors collide on Cairo’s cultural canvas, capturing emotion in a series of fluctuating brushstrokes. The landscape is rich, it’s vibrant — but it is nowhere near done.

Independent theatre project Tahrir Monlogues takes the revolution to stages across Cairo’s cultural hot spots, recreating a Tahrir Square atmosphere with personal recollections of the uprising. Raw and uncensored, the performance strips the revolution — and the performers — down to the very core.

Poignant, witty, and strong, Tahrir Monologues are everything the revolution was — until it wasn’t. In the shadows of political tumult and uncertainty, the project aims to preserve and glorify the memory of Tahrir Square.

Founder Sondos Shabayek says the project was spurred by an “urge to create a community similar to what we had in Tahrir at the onset of the revolution.” A series of intertwined monologues venture to “keep the revolution alive.”

Another force echoing the revolutionary pulse is street art. Graffiti has been an unavoidable phenomenon, arising as an outlet for expression while providing contextual visuals to illustrate the country’s political updates. Cairo’s walls resemble an open book, sprawling with socio-political signage.

But critical street art across city walls is still unsanctioned, even months after Mubarak’s ouster. The Supreme Council for Armed Forces, currently in power, set red lines for expression and systematically crackdown on anti-regime messages. On October 20, April 6 political movement member Ali Al-Halaby was detained by the military council and referred to prosecution on accounts of “damaging public property” and “approaching a military area”, according to the Arab Network for Human Rights Information.

As the Supreme Council of Armed Forces gained opposition after a series of alleged human rights violations, anti-military graffiti spread across the city. From January 25 forward, the revolution’s momentum has been mirrored in arts and culture throughout Cairo. The art scene developed into a platform on which political tensions are played out, processed, and felt.

Hany Rashed remembers January 28, the day of rage. “I saw a grenade soar up in the air, and watch it curve and head for an old man on my left. I pushed him aside, just in time for the grenade to hit my arm,” he reminisces, his face animated. “I was bleeding. But a third man emerged from the crowds and wrapped my arms up in a flag.”