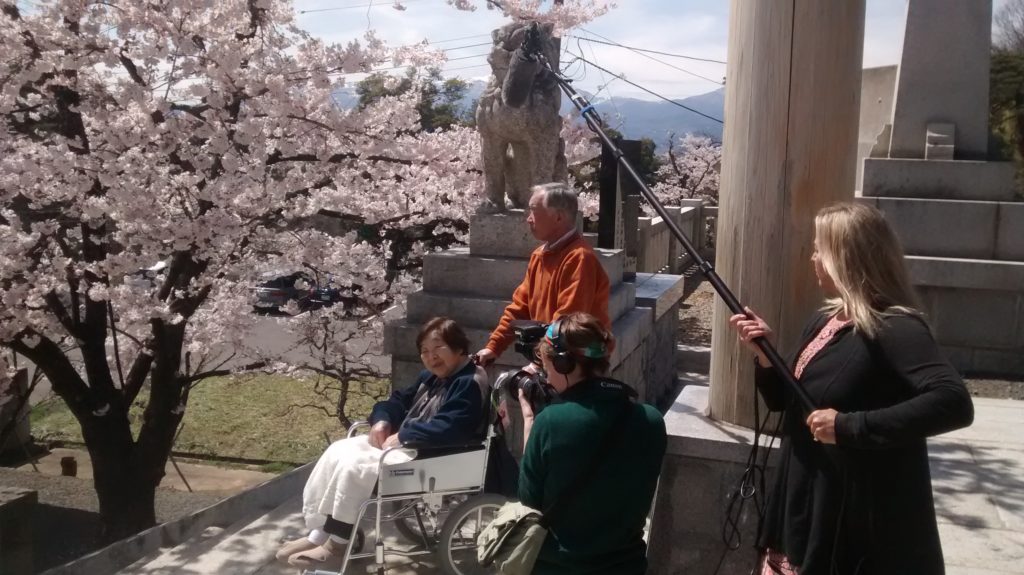 FUKUSHIMA — I arrive here to the smiling face of Hidekatsu Ouichi, the main character of our film “Son of Saichi.” He gives me and my co-director big, American-style hugs before driving us to his home in the Japanese countryside. The winding road takes us through stout mountains and valleys of rice fields. The cherry blossoms are just beginning to bloom, adding specks of color to the still-brown winter landscape. We’ve entered the radiation zone.

This is our fourth trip filming with Hidekatsu, but our first time staying with him in his hometown, Yamakiya. That’s because he’s only just moved back this month. Hidekatsu is a seventh generation farmer whose life was irreversibly altered on March 11, 2011 by the nuclear disaster at the Fukushima Daiichi Plant—just 30 miles from his ancestral home. When the winds carried deadly radiation across Japan that spring, his fertile soil was contaminated, and his community was evacuated. Since then, he has been waiting in limbo.

After almost two years of a massive government cleanup effort in Yamakiya—a project that cost around $1 million per property—there are now visible signs of the invisible contamination that devastated this area five years ago. Enormous piles of biohazard bags filled with radioactive materials occupy field after field with formidable-looking fences surrounding them. The fences weren’t there in 2014 when we last visited. What hasn’t changed is that there’s still no permanent plan for what to do with all of the materials. Hidekatsu tells us they’re calling these fields the “temporary temporary storage sites.” I guess repetition gets the point across: we’re really not sure what to do here.

I’m here to tell Hidekatsu’s story. But I know that there is risk.

Filming in the radiation zone has always been like plunging into an icy cold lake. You enter with great anxiety, but you quickly numb to the uncomfortable sensation. Unlike in previous trips, we’re staying within the radiation zone for the entire duration of this shoot. The trick is to maintain that psychological numbness for days now, instead of just hours. Although contamination levels have gone down as a result of the cleanup, they’re still high. And my awareness of that never quite leaves me while I’m here.

I enter Hidekatsu’s house with a handwritten radiation report that he had requested from the local government to give my peace of mind. He feels very confident that the levels are now safe. I am less convinced. In the bedroom where I’m sleeping, the report says 0.17 microsieverts/hour, and in the living room it’s 0.15. These are fairly low figures—something akin to what you’d find in an average American household due to common environmental radiation. Yet, I can’t help but be aware of my breath. I imagine particles of dust entering my lungs with each inhale, and I wonder if any are harmful, if they’ll stay inside of me. I watch the rest of my crew sit cozily in the living room, and wonder if that 0.15 can hurt them.

My exposure here, though disconcerting, is limited and temporary. I’m within the realm of “safe” irradiation, even though many experts say that any exposure at all is potentially harmful.

Despite knowing the long-term risk, Hidekatsu has chosen to remain here permanently. It’s a decision that few Yamakiya residents have made so far—only 31 of the original 350 families from this town have moved back. And not one of these returnees has children.

I think it’s difficult for most people to understand what making this choice must be like. Having been here for a relatively short period of time, it’s still hard for me to comprehend. I hope that the film, in its deep and personal investigation of Hidekatsu’s life these last 5 years, will illuminate the human experience of the aftermath of this disaster. Because for over 100,000 people in the Fukushima area, the disaster didn’t happen and then pass—it’s a daily reality.

Beth Balaban is a GroundTruth Fellow and the co-director of the film “Son of Saichi.”