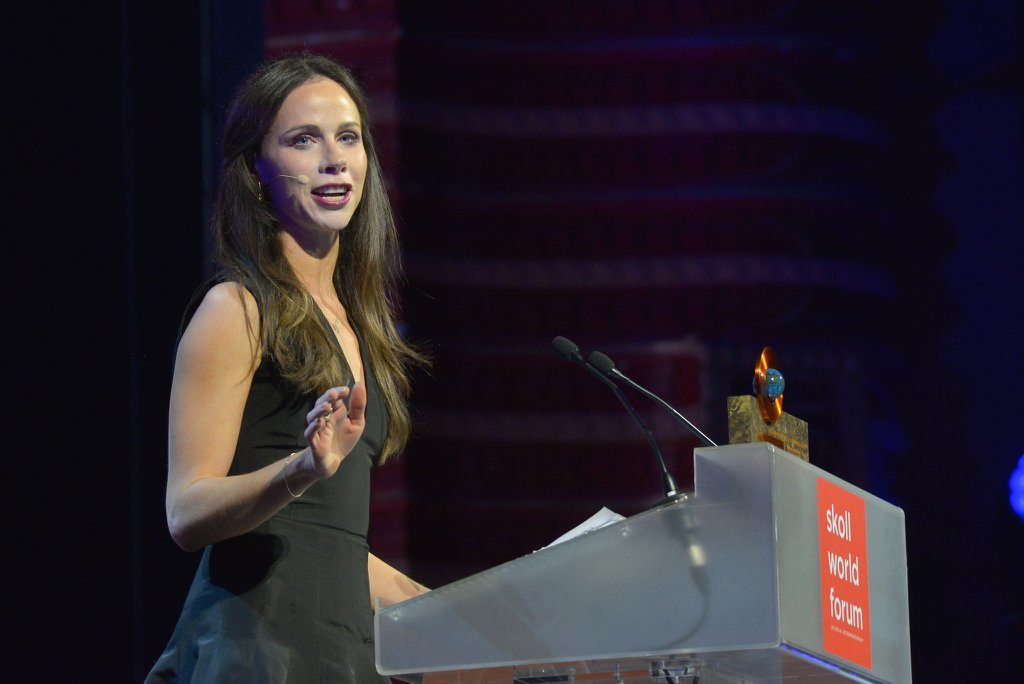 "I was raised to give a damn." —Barbara Pierce Bush, Skoll Awardee (Courtesy of Skoll Foundation)

“Shutting ourselves off from those we see as other erodes our humanity.”
—Sally Osberg, President and CEO of the Skoll Foundation

OXFORD, England – In this ancient college down, 1,200 of the world’s top social entrepreneurs, thinkers, innovators and funders gathered here for the Skoll World Forum amid Oxford University’s hallowed halls to share ideas and inspiration, walking through its narrow warrens, and across its bridges and around its walls built of stone.

And the stone walls that enclose the 1,000-year-old university were like a stage set for the message that Skoll Foundation President and CEO Sally Osberg used to frame the convening. Osberg described how the world today seems to be in a wall building “frenzy” that divides us from one another physically and emotionally, and why it’s so important to celebrate leaders who break down barriers and use creativity, innovation and compassion to solve the world’s biggest crises.

Among them are the six winners of the Skoll Awards for Social Entrepreneurship: Barbara Pierce Bush, Lesley Marincola, Jennifer Pahlka, Harish Hande, Jess Ladd and Anushka Ratnayake. Meeting them and hearing their stories is like being hooked up to an IV of inspiration.

The honor comes with a $1.25 million investment to scale work and increase impact. This year, five of the six awards were given to women, something Osberg thinks is significant. “There is a perception that women entrepreneurs either don’t exist or don’t prevail,” she says. “We wanted to see if we could prove that wrong, and I believe we’ve done that.”

Barbara Pierce Bush, daughter of former President George W. Bush, started Global Health Corps with this core belief: Healthcare is a human right. The organization is focused on advancing health equity through fellowships that harness the talents of emerging young leaders. Young professionals and college graduates are paired – one American fellow with one international fellow – for cross-cultural collaboration. They are then placed within existing health organizations in Africa and the United States and charged with the task of addressing gaps that exist in logistics, finance and communications.

Bush was inspired to start the organization after traveling to Africa with her father in 2003. There, she saw hundreds of people with HIV who did not have access to antiretroviral drugs that had been available for years in the United States.

“I’m a twin. I really get the power of proximity,” Bush told the New Theater audience. “I understand deeply what it means to share space – or a womb – with another… We are bolder together.”

Around the world, two billion people are living off the grid in energy poverty. Of their options for light – kerosene, candles, firewood and batteries – kerosene is the most popular. It’s also the most dangerous and toxic. Millions of children around the world are severely burned every year when kerosene lamps and stoves tip over, and the World Health Organization estimates that air pollution from them led to an estimated 4.3 million deaths in one year alone.

Enter Angaza, the organization Lesley Marincola founded that allows the poorest customers to pay for clean energy products in small increments over time. Here’s how the pay-as-you-go technology works: customers use their cell phones to pre-pay for clean solar energy. Those payments are tied to energy use and when the pre-paid energy is consumed, the solar product those payments are tied to shuts off.

“By switching from kerosene to solar, families are investing the savings in better health and education for their kids,” Marincola shared in her award acceptance speech. “They’re irrigating crops, growing their incomes and feeding the community… and women and children are leading longer healthier lives… We can change billions of lives.”

And she’s well on her way. In the past two years, Angaza technology has allowed two million people to make the switch from kerosene to clean solar energy.

Jennifer Pahlka, founder of Code for America, and one of the architects of the United States Digital Service, is out to fix government. Technology, she says, is the way to do it.

Countrywide, tens of millions of Americans are unable to access government programs designed to help them. In California alone, more than 2 million people are going hungry, unable to access the food assistance for which they’re eligible. A major barrier is the daunting online application: 50 screens long, it takes an hour to complete. Code for America pared the whole process down to 7 minutes.

“This is evidence that government can work by the people for the people in a digital age,” Pahlka said in her award acceptance speech.

“Isn’t it time we dragged government into 21st century?” she asked of the Skoll audience. Across the country Pahlka is mobilizing volunteers – 70 chapters (called brigades) and counting – to make local government work better and unlock access to government programs like social security, medicare, food assistance, housing assistance and unemployment that make up 19% of the U.S. gross national product.

Harish Hande has the distinction of being the only man among this year’s Skoll Awards for Social Entrepreneur winners. He has been lighting up homes and businesses across rural India for the past 23 years through Solar Electric Light Company (SELCO), the company he co-founded in 1995 to give people living in poverty access to energy – specifically clean energy like solar power. He wanted to prove that the poor can afford and maintain sustainable technologies and that social ventures can be commercial. Today, SELCO is an umbrella of organizations that operate at every point in the energy supply chain to make energy accessible and affordable.

From electric flatbread machines for bakers, efficient furnaces and blowers for blacksmiths, and solar powered hammer mills for farmers, Hande is helping to lift India’s micro-entrepreneurs out of poverty by making them more productive and more profitable.

The company’s direct energy interventions have provided 7.5 million people with lighting and energy products for their homes, livelihoods, schools and health centers.

Over the next 10 years,” Hande forecast in his acceptance speech, “10 million people have the potential to be lifted out of poverty.”

While the #metoo movement is a powerful moment of reckoning and revolution, Jess Ladd believes there is a lot more work to be done to harness what’s happening on social media for sustained change. Through Callisto, the organization she founded, Ladd is developing technology to combat sexual assault and harassment by making it easier to find repeat perpetrators and empower victims to make reporting decisions that are right for them. Her online reporting system allows victims to: record what happened and time stamp it; report the crime to authorities to start an investigation; save information about the assault to come forward if someone else identifies the same perpetrator.

Ladd’s work began on college campuses, where it’s estimated that one out of every five women are sexually assaulted. Ladd says when it happened to her, the reporting process was as traumatizing as the assault itself. Victims “martyr themselves in a broken system,” she told the Skoll audience.

This year Callisto is expanding its reporting platform to include professional environments – like the fields of tech and entertainment – to empower victims beyond college campuses.

“What if reporting did not take a tremendous act of courage? What if speaking out.. was a commonplace, very rational thing to do? Then perpetrators would think twice before violating the rights of another human.”

When Anusha Ratnayake shared her idea of a mobile layaway plan for farmers in rural Africa who have no bank account and no access to loans, one farmer told her exactly what she needed to hear to know she was on the right track: “This is great,” she says he told her. “I had this idea a year ago.”

Within a month of that conversation, Ratnayake launched myAgro, an organization that gives farmers the ability to save money for seed and fertilizer using their mobile phones. Instead of having to spend $100 on seeds and fertilizer all at once, farmers can purchase a myAgro savings scratch card at the same local shop where they buy phone cards and save up between harvest – when cash flow is best – and planting – when cash flow is worst.

“It’s at planting time that farmers are cash poor, yet they need to make their biggest investment,” Ratnayake said as she accepted her award. “This keeps them stuck in a cycle of poverty that is really difficult to break.”

Today, myAgro delivers high-quality seeds and fertilizer to 50,000 farmers in western Africa, increasing their harvests by as much as 60% annually. And, Ratnayake says, the next generation is noticing. “I asked a young girl named Amunata what she wants to be when she grows up. She says she wants to be a nurse and a myAgro vegetable farmer… We believe Amunata and her friends will change the world.”

With that, Ratnayake lifted her Skoll Award from the podium, held it above her head, and proclaimed, “This one is for the girls.”