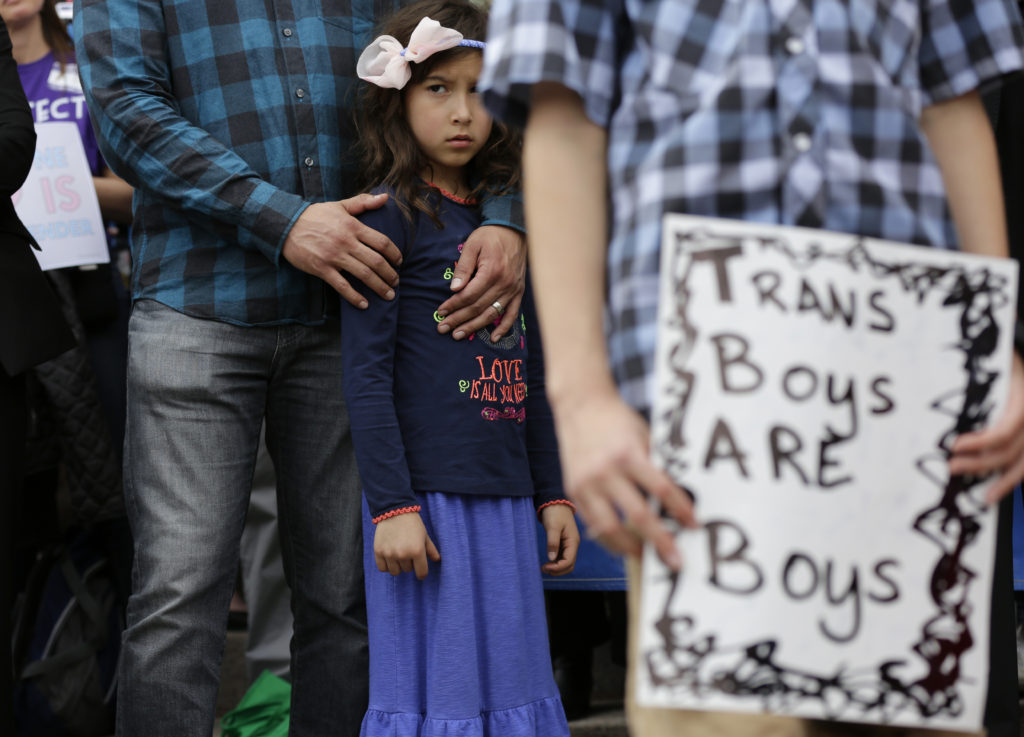 Libby Gonzales stands with her father, Frank Gonzales, as she joins other members of the transgender community during a rally on the steps of the Texas Capitol on March 6, 2017, in Austin, Texas. (Photo by Eric Gay/Associated Press)

For years, Kam Burns and many of his fellow trans journalists have been noticing the pitfalls in reporting on trans issues. The community has increasingly been in the news, mostly as a target for right-wing fear-mongering, despite them comprising less than 1% of the population. In some states, right-wing activism has led to many bills that restrict, ban, and in some cases, criminalize trans participation in society. A recent study found that mainstream coverage of trans issues was limited and that the minimal coverage that did exist perpetuated stigmatizing ideas. The increased visibility has become a double-edged sword, making respectful and responsible coverage a priority for journalists.

In 2019, Burns joined an informal Slack group called the Trans Media Mafia that would eventually evolve into what’s now the Trans Journalist Association (TJA). They agreed that existing style guides that mentioned trans coverage weren’t thorough enough or representative of their perspectives. So they created their own, a whopping 7000-word document that’s the most thorough style guide pertaining to trans reporting to date. Burns calls it “a living document” and said that as time goes on and language evolves, they will continue to update it.

In this edition of Navigator, we spoke to Burns and fellow TJA co-founder Tuck Woodstock, co-founder of Sylveon Consulting, an organization that offers workshops on gender equity to newsrooms and organizations, as well as Gabriela Martinez and Kyra Miles, two cisgender LGBTQ RFA corps members who report on trans issues. The Navigator sought their  advice for journalists reporting on the trans community, mistakes to avoid, and things to keep in mind. Their responses have been edited for length and clarity.

Treating trans people like the experts on their own lives and recognizing the diversity in experiences within the community is the foundation for the rest of your reporting. No singular trans person can speak on behalf of the entire community.

“If you’re doing a story about trans people, there should be more than one trans source because there is such a variety of experiences,” said Burns. “My experience is going to be very different from a trans woman, a nonbinary person, or another trans man. There are so many different ways to be trans, so you can’t expect one person to speak to all of that.”

He also stressed that including trans voices in stories about non-trans topics like health, music, education and others helps to normalize the fact that trans people exist and are involved in all facets of public life.

“We see stories published all the time that are about trans people but don’t actually include trans voices,” added Woodstock, who hosts the award-winning podcast Gender Reveal. “It’s incredibly dehumanizing.”

If you’re a cisgender journalist, it’s important to take a step back and acknowledge that you are not an expert on these topics. Don’t try to force your own preconceptions of what it means to be trans into your reporting.

“Being able to listen with empathy and write with empathy is necessary,” said Miles, who covers education in Birmingham, Alabama, for WBHM and has reported on trans youth. “As a cis person. I can’t ever fully understand what it means to be trans in this current society, but I can listen to those who have had that lived experience and apply what they say to better inform my reporting”

Part of acknowledging the variety of trans experiences is reporting on trans-related topics that don’t get as much mainstream coverage. Trans women of color, for example, are more likely to experience unemployment, homelessness, and violence, and yet they’re not talked about often. On the other hand, there are positive events in the trans community to report on.

“Don’t just reach out to transgender sources when you want to report on bad news,” said Martinez, who covers the intersection of race and identity for WITF in Harrisburg, Pennsylvania. “Pay attention to community events, where people gather to celebrate and experience joy. Do a profile about a community leader who is doing positive things and helping people. Show how the transgender community is resilient and finding their own solutions to discrimination and inequality.”

Describe them using their own words. Don’t make assumptions

When reporting on members of the trans community, it’s important not to make assumptions about their gender, pronouns, or experiences. Every trans person is different and the most basic way to ensure respect and accuracy is to use the words that they use to describe themselves.

Burns said it’s “good practice” to always ask sources their pronouns, regardless if a story is about trans people.

Miles advises checking in with people, especially trans youth, throughout the journalistic process to make sure they know how they will be referred to and to ensure its accuracy. “You may even want to check before publishing that this is an accurate representation of this person and their identity,” she added.

The language a trans person uses may be at odds with your newsroom’s style guide, but Woodstock advises journalists to push back against these rules and advocate for trans interviewees. “Experienced editors might say something about how it doesn’t follow house style to use someone’s actual pronouns,” he said. “You may be made to feel wrong, or young, or stupid, or unprofessional, for writing stories with care and accuracy.”

When it comes to trans-inclusive language, Woodstock says the goal isn’t just for journalists to be “nicer to trans people,” but rather for them to focus on accurate and more thorough reporting.

Make an effort to build trust

If you’re not a member of a certain community, getting close to them is the best way to understand them, which leads to more authentic and representative reporting.

There are many ways to communicate to trans interviewees that you’re an ally who will not misrepresent them or harm them, and going to community events and building relationships is a great first step, said Martinez.

“Trans issues are a beat just like any other beat; it’s not a topic that people can be expected to get right if they’re thrown into it with no prior subject experience or relationships with sources,” said Woodstock. “If you’re a cis reporter who is being asked to cover trans issues, and you don’t have a lot of experience in the trans community, you need to find a way to partner or collaborate with someone who does.”

Making sure you put your subject’s humanity first is imperative. “If you have to talk off the record with a source to build trust, do it,” said Martinez. “That shows that you care about creating a safe space for the people you are reporting on.”

Part of building trust is also making sure your trans sources don’t feel uncomfortable with your questions. Burns suggests avoiding unrelated personal questions. “If you’re telling a story that’s not related to their health or their transition process, don’t ask those questions. That’s an immediate way to put your source on guard because it’s very personal.”

Additionally, something as small as having your pronouns in your Twitter bio and email signature can signal that you’re an ally.

Journalists are trained to seek out and present “both sides” of an issue in the interest of fair representation. But that approach doesn’t recognize important nuances in trans issues. Woodstock emphasized the importance of resisting the urge to include anti-trans perspectives in the name of objectivity and claims that that idea is a fallacy.

“A person’s experience is not a side to take,” agreed Miles. “You can mention anti-LGBTQ policy if that’s relevant to the story without giving those opinions equal footing when they’re actively going against someone’s humanity.”

The framing of certain issues as a public debate suggests that anyone regardless of expertise has the right to weigh in on them.

Burns brought up the topic of gender-affirming care. The overwhelming majority of science has agreed that surgery and hormone therapy are safe and effective with a very small regret rate. Still, many journalists continue to present it as “an open question,” which is not only inaccurate and anti-scientific but it serves to delegitimize trans healthcare.

Recent research found that negative or skeptical framing of gender-affirming care in the media has led to restricted access to treatment for trans youth.

Seek out resources made by trans people

Along with the Trans Style Guide, journalists should familiarize themselves with a number of resources made by queer and trans people: GLAAD media reference guide, National Association of LGBTQ+ Journalists guide, Transgender Law Center’s media guide, and the AP style guide.

The Society of Professional Journalists’ Race and Gender hotline is a “confidential and non-judgmental” service where journalists can consult experts if they have specific questions or concerns about a story they’re writing.

Additionally, follow trans journalists and read publications that center queer voices such as them., Out Magazine, NBC Out, the Advocate, the Washington Blade, MetroWeekly, and PinkNews.

“What I hope is that people understand that transgender issues do not just relate to trans people,” Martinez said. “Issues of bodily autonomy, access to reproductive health, privacy, discrimination in the workplace and housing, sexual violence and many other issues — these are issues that affect everyone. It’s important that people pay attention and do not see transgender stories isolated and removed from their own experiences.”