Overcoming bias: recognizing it in people — and your reporting 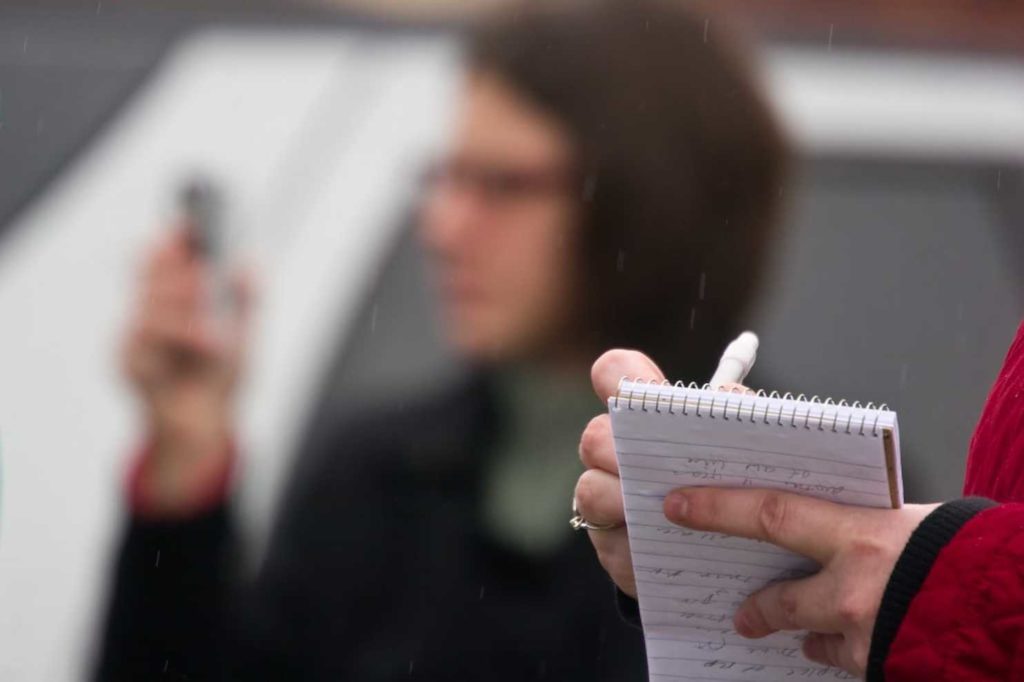 This week, we want to share some of the training our Crossing the Divide reporting team got before embarking on their cross-country journey.

We’ll hear from Tim Phillips and Lee-or Ankori-Karlinsky of the organization Beyond Conflict. The nonprofit has facilitated dialogues between opposing sides of conflicts in places like Northern Ireland, Central America and South Africa.

Tim and Lee-or gave the the fellows a training on cognitive bias — both to recognize it themselves and to recognize other people’s modes of thinking. The biggest takeaway was how the fellows could engage with people who would be unlikely to trust or talk to a reporter by engaging with something of common interest, while recognizing that they hold values different from their own.

Focus on how we think, not what we think

The content of our thoughts is less important than how we have those thoughts. Cognitive bias is a mode of thinking our brain has evolved for survival, because bias is, cognitively, just an assessment of a potential threat, real or imagined.

As Lee-or explained, you can’t ever get over bias. “Implicit bias is a mechanism for survival, but it does not excuse behavior,” he said.

The first principal of understanding implicit bias is that we think and feel automatically. Your unconscious brain exerts a huge influence over what you think and feel. Bias is a shortcut your brain creates because it can’t process all the external stimuli it’s receiving in real time. So it just determines whether the person it’s encountering is one that poses a threat to you based on a shortcut it creates. “Stereotypes are socially constructed but unconsciously processed,” Tim explained.

The second principal about cognitive bias is that we think and feel socially.

“Our entire physiology is oriented toward groups, because groups help us to survive,” Lee-or explained.

Your position within the group really matters, and the status of your group relative to other groups matters.

“The thing about social groups is that they are really easy to form, but once formed, it’s really hard to undo them,” Lee-or says.

Exclusion within the groups is perceived as a dire threat to survival. “We experience social rejection as physical pain in our brains,” Tim explained. He says the feeling of exclusion is the core driver of conflict.

The last principal of this meta-cognition of bias is that this automatic thinking and feeling gets organized in predictable mental models, that is your stereotypes and preconceived narratives.

But as Lee-or said, “These are the things you have a lot of power to shape.”

Stereotypes are not random. Social science has distilled their content to how we perceive the intentions (a continuum of bad to good) of the person or group we’re thinking about and the perception of their power in society (a continuum of powerless to powerful). If a group is perceived as both badly intentioned and powerless, it often inspires a feeling of disgust. A group that is perceived to have both good intentions and to be powerful, that is a positive stereotype.

When taken together, these three principals create polarization. Lee-or encouraged the fellows not to think of polarization as a necessarily negative thing, but rather a result of a pluralistic, large democratic society. The problem he said, is when we perceive the other group as so close-minded that there is no point in engaging in a dialogue with them. Polarization isn’t a problem until it means civil discourse fails. “We are fighting some real uphill cognitive battles when it comes to polarization,” Lee-or said.

So how do we engage with people who do not trust journalists because they view us as a badly intentioned but powerful group?

Tim described empathy as a “neutral brain process” that can be used for both good and bad ends. But empathy is managed, he explained, through context and proximity. That is letting the person you’re speaking to see you as something they understand from their own life.

Paraphrasing a researcher at Tufts, Tim said, “We can’t think rationally until we feel our identities are understood and valued by others, once people are heard as they see and hear themselves.”

“We all hold multiple values sacred, and some people you engage with hold values you oppose, or think are immoral or unjust,” Lee-or said. “But they also have other values that they hold sacred that you probably share. From a professional point of view, to do your job, is to emphasize those values that you share, while not ignoring [the values you disagree with].”

So once a journalist connects to someone who may hold some ideas that are problematic, the key step becomes contextualizing those ideas as normative or not normative.

This is a key point, because the battle about narratives is determining what is acceptable and what isn’t. “Every polarized country is a contest for what is normal and what’s fringe.” Lee-or said.