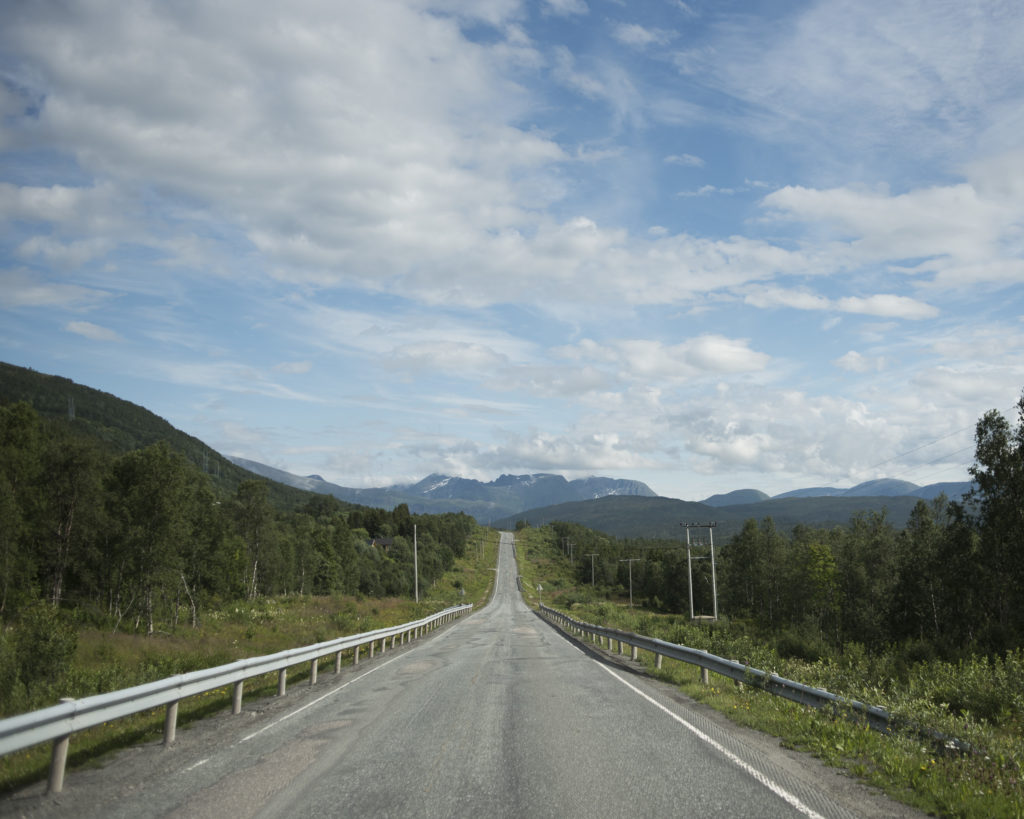 ALTA, Norway—I landed in this northern Norwegian city after 24 hours of travel, and that was when the journey really began.

Camilla Andersen, a documentary photographer from Norway, and Magnus Ormestad, a podcaster from Sweden, met me in the camper van that would be our home for the next two weeks.

Camilla kicked off our travels by driving three hours. Just outside the town of Karasjok, we pulled over and parked beside a picturesque river. It was the height of summer, and purple flowers bloomed next to alpine shrubs. In the land of the midnight sun, the sky was still bright, and I had to keep reminding myself it was one in the morning. Time to hit the hay.

Magnus and Camilla converted tables into beds, while I climbed into a loft above the driver’s seat. I told my family and friends back home that I’d arrived safely and that I had reached Saturday Night Live heights: I was officially living in a van down by the river.

Then the shushing of the river carried me into dreamless sleep.

There aren’t a lot of hotels in northern Norway and Sweden—at least, not in the regions we traversed. And our plan to stay in a camper had one major upside: we could stay longer and dig deeper into each story.

We didn’t need to worry about booking reservations or driving back home late at night. We could remain flexible and open to where the story took us—and it would be the key to our reporting. We were focusing on two of the most sensitive issues that we could broach in the indigenous Sámi community—climate change and mental health. We needed time to gain our subjects’ trust, immerse ourselves in their lives and understand the complex challenges they face.

So, we brought our home with us: a little camper affectionately dubbed Marta, with a predilection for playing Abba and waking up to the best riverfront views.

From the beginning, our days fell into a comforting rhythm.

Each night, the three of us played a game we called “Camper Tetris.” Magnus would move luggage from under the “kitchen” table, move the table down to knee-level, pile on the cushions, and presto blammo, his bed was made. During the day, Camilla’s similarly table-turned-bed became an impromptu storage area, where we would keep sweaters, laptops, spare electronics, and chocolate—lots and lots of chocolate.

Somehow, we managed to work out these routines pretty quickly—signaling when one of us needed to change clothes or use the tiny bathroom or have a few minutes of quiet time. Somehow, we made it the entire trip without dissolving into curses or inarticulate screams about personal space.

On the contrary, our lives felt cocooned together. We worked in sync for two weeks, typing up notes, organizing audio and photos, translating interviews, and planning the next steps of our reporting.

We learned to bring our electronics everywhere; we never knew when we might have a chance to plug in and charge up. We met friends, old and new, who offered us showers, laundry facilities and home-cooked meals—all the comforts of home.

We traversed several hundred kilometers of roads in the Scandinavian Arctic. It was, in the words of Magnus, “highly Instagrammable”–solitary roads winding over hills and mountains, along crystal-clear fjords, under dramatic layers of clouds.

Our mobile home made it possible to cover all of this ground—not just the physical distance separating isolated villages, but the breadth of conversation. We could stay just a little longer, dig just a little deeper, learn just a little more. We could change our plans in an instant and decide to follow reindeer herders into the grasslands to work until the early hours of the morning—a decision we all agreed was the highlight of the trip.

At every home and office we visited, we sipped java and listened to stories about the painful cost of climate change and the many ways the Sámi have adapted to a changing world. We talked to experts and families for hours, often late into the night, and then we would stumble into our camper and sleep for a few hours before doing it all again the next day.

It can be cliché to talk about the kindness of strangers, especially while traveling. But I was reminded again and again of the generosity our subjects offered us as journalists. It wasn’t just the steady stream of coffee and reindeer jerky. In more ways than one, we drove into our subjects’ lives and settled in for the long haul. How closely we peered into the lives of others—and how freely they gave us access.

As a journalist who reports frequently around the world, I have the extraordinary privilege of seeing the side of a country that many visitors never glimpse. I’m lucky to be able to step closer, to ask questions and probe deeper, to run my fingers over the texture of others’ lives.

And I carry home with me the responsibility to tell those stories with all the nuance and complexity they demand—even after I left the van behind in Norway.