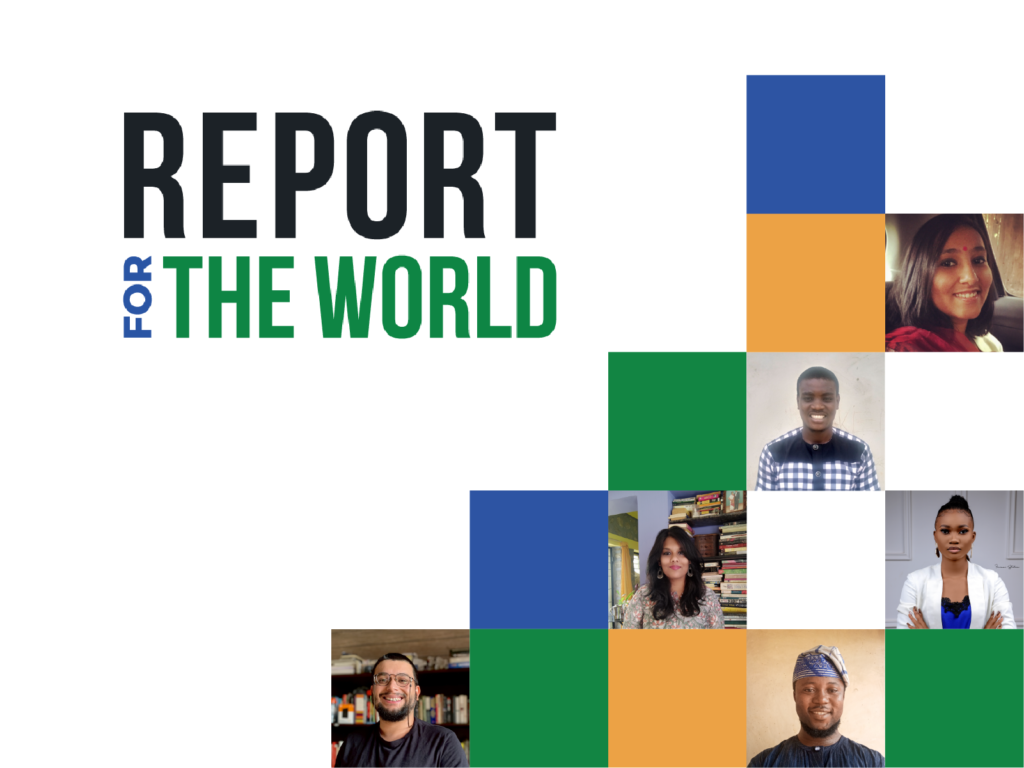 BOSTON — Report for the World announced today the selection of six journalists for its 2021-2022 reporting corps. Three corps members will join the staff at TheCable in Nigeria and three will join Scroll.in in India.

The announcement coincides with World Press Freedom Day, a date which celebrates the fundamental principles of press freedom: to evaluate press freedom around the world, to defend the media from attacks on their independence and to pay tribute to journalists who have lost their lives in the exercise of their profession.

Report for the World, an initiative of the nonprofit organization The GroundTruth Project, is an international service program that matches local newsrooms with talented emerging journalists to report on under-covered issues around the globe.

“On World Press Freedom Day, it is our extraordinary honor to support these talented journalists who will be serving their communities,” said Charles Sennott, founder and CEO of GroundTruth. “Our mission is to rebuild journalism from the ground up by helping local news organizations serve under-covered corners of their communities. There is a need to strengthen press freedom around the world. Healthy societies require trusted, accurate information and never before has that need been more clear and more urgent.”

Report for the World launched in February and has been working with its newsroom partners, TheCable and Scroll.in, to select these talented local journalists. The application process was highly competitive, with over 335 applicants, but only six spots available. The corps members, who are full-time employees of the newsrooms for up to three years, are:

“This is a great new ground for us as we expand our coverage of largely underreported communities, and is coming at a time when Nigerians are increasingly paying more attention to criminal justice, climate change and fake news,” said Simon Kolawole, founder and CEO of TheCable. “With the calibre of Report for the World corps members that we have, we are very optimistic of making a strong impact.”

Report for the World corps members join their newsrooms this month after having completed world-class training in journalism safety, cyber security, international collaboration and story design. They will continue to receive regular training and mentorship throughout the year from GroundTruth staff.

Corps members will cover a range of topics and stories, such as work and gender, criminal justice, health, education and climate change. These reporters have between two and 11 years of experience, and have all been recognized for excellent journalism that serves communities. The group also includes a poet, the recipient of Africa Check’s African Fact-Checking Award and an NGO co-founder.

“Scroll.in is one of the few bastions of independent media in India, and I am excited to be a part of its ‘Common Ground’ team in partnership with The GroundTruth Project. I will be covering gender and labor, both sites of historic inequality and oppression that have been normalised in our cultures,” said Aarefa Johari. “I’m looking forward to defamiliarizing these cultural narratives, raising questions, exploring answers, holding the powerful accountable and, hopefully, bringing about some meaningful change in the lives of the disempowered.”

Report for the World draws upon best practices learned from GroundTruth’s successful Report for America program, which last week announced the placement of 300 corps members in 200-plus newsrooms across 49 states, Puerto Rico, Guam and Washington, D.C.

Likewise, Report for the World is based on a highly-leveraged financial model meant to inspire community philanthropy. The program will pay for half the full-time salary of a corps member for the first year, while coaching and supporting local partner newsrooms to raise the other half of the salary through philanthropy, earned revenue and crowdfunding.

Report for the World will open a second round of placements later in the year, including an expansion to Latin America, and aims to support 500 corps members in 25 countries by 2026.

The GroundTruth Project, home to Report for the World, is supported in its global efforts by The Bake Family Trust, The Henry Luce Foundation, the John D. and Catherine T. MacArthur Foundation, Spring Point Partners, the Evelyn Y. Davis Foundation, Robin D’Alessandro, Susie Trees and Newman’s Own Foundation.

To learn more about Report for the World and its efforts to strengthen communities around the world through local journalism that informs, engages and enables, visit www.reportfortheworld.org.

Report for the World is an international journalism program that matches local newsrooms with talented emerging journalists to report on under-covered issues around the globe. An initiative of The GroundTruth Project, Report for the World launched in February 2021 in India and Nigeria.