The program nearly quadruples amid national crisis in local news; announces new round of support from Facebook Journalism Project

NEW YORK – Report for America today announced the selection of 225 journalists for its 2020 reporting corps. The new cohort will be placed with more than 160 local news organizations across 46 states, Washington, D.C., and Puerto Rico.

These reporting positions come at a time when local journalism is already reeling from years of newsroom cuts and unforeseen challenges brought on by the COVID-19 pandemic. They also mark a major expansion from the current corps size of 59, of whom, more than 90 percent are returning.

Report for America is a national service program that places journalists into local newsrooms to report on under-covered issues and communities through its reporting corps. It is an initiative of the nonprofit news organization, The GroundTruth Project.

The full list of 2020-21 corps members is here. The journalists start in June and reflect wide ranging backgrounds of the communities they will serve:

“It’s now crystal clear that the need for trustworthy, accurate, and local information can be a matter of life and death,” said Steven Waldman, co-founder and president of Report for America. “This surge of reporters should help meet this moment.”

Today, Report for America also announced a new round of support from the Facebook Journalism Project. Facebook is a leading supporter of the program and their latest contribution of $2.5 million will help scale the corps at this tremendous time of need for local news.

“Local journalists are providing us with an extraordinary public service 24 hours a day,” said Campbell Brown, VP, Global News Partnerships, Facebook. “We all need to understand how the virus is impacting the communities where we live—it’s vital information that’s helping keep our friends and families safe, and we’re proud to support Report for America in this effort.”

Report for America co-founder Charles Sennott, CEO of GroundTruth, said, “We’re grateful to all of our funders who are allowing us to answer a great need across the country for trusted local news and to restore journalism from the ground up in communities across the country.” 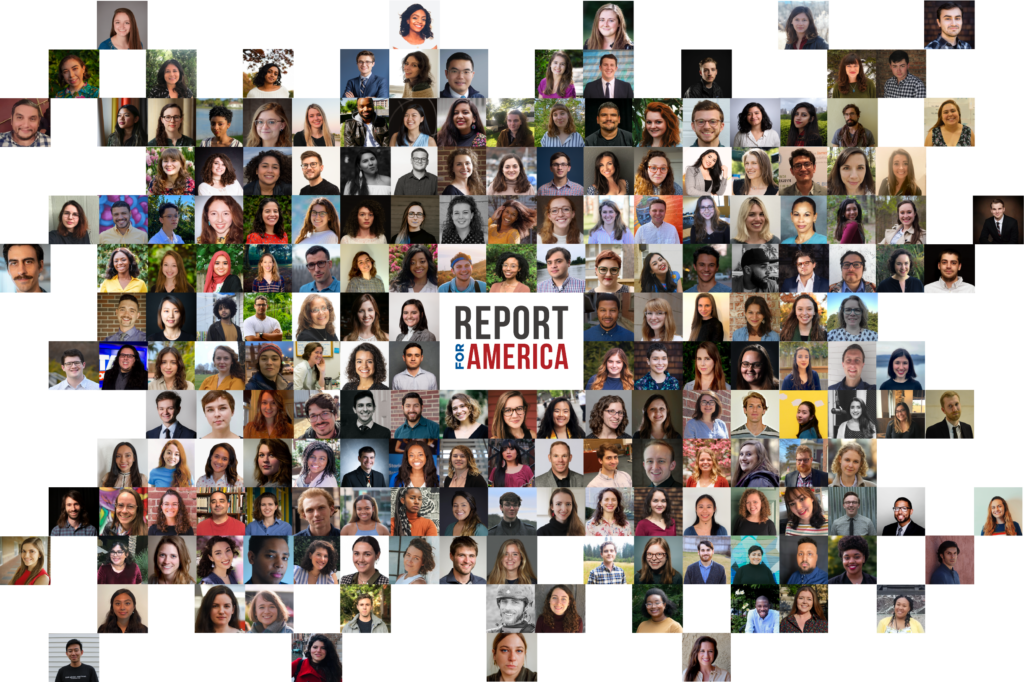 This year’s Report for America corps was chosen after a highly selective national competition that drew more than 1,800 applications. Leading journalists, editors and academics from a diverse spectrum of backgrounds and different media platforms acted as judges.

Among the new class are the winners of: the Maryland/Delaware/DC First Place Award for Best Series (“Surviving Abuse”); Best breaking news and human interest stories from the Los Angeles Press Club (for “Families lose loved ones to Orange County’s opioid crisis”);  and the New England Press Association Rookie of the Year Award.

The group also includes career-changers and reporters with unusual non-journalism experiences, including: a Stanford computer scientist who holds two patents, the Air Force Academy’s Outstanding Educator of the Year, a Ph.D. ecologist, an intelligence officer in the Israel Defense Forces and a Peace Corps volunteer in Rwanda.

“The talent level of our applicants was extraordinary,” said Kim Kleman, National Director of Report for America. “And it shows that there’s a new generation that can’t wait to get out there, connect with residents and report on what’s happening in communities throughout the country.”

Five are post-9/11 veterans seeking their next opportunity to serve at home. “As a transitioning military member—with service around the country and world—I recognize the importance of local journalism,” said Brandon Lingle, a U.S. Air Force veteran who will be reporting for the San Antonio Express-News. “Local voices and stories are critical for our democracy today.”

Many corps members will cover the coronavirus for their host news organizations. Report for America and The GroundTruth Project have been developing guidelines and workshops for journalists to work safely in the field at this time of required isolation and social distancing.

The newsrooms were selected in December based on a national competition. To win, news organizations described an urgent gap in coverage and a plan to deploy a Report for America journalist to address that gap. As a result of the COVID-19 shock, some newsrooms pulled out of the program and others newsrooms asked for additional staff.

The 162 newsrooms are in 46 states, plus Washington, D.C., and Puerto Rico. Nearly half of the positions are in nonprofit media organizations.  The breakdown of the newsrooms by media platform:

Initially, many of the corps members will be covering COVID-19. Over time, they will shift to the beats originally defined by the newsrooms, including health care, housing, schools, government accountability, minority issues, environmental issues, and military and veterans affairs.

The final list of newsrooms, searchable by state or beat, can be found here.

Report for America aims to increase the size of its reporter corps each year—with a goal of 1,000 journalists by 2024. Its ability to scale the program is made possible by multi-year commitments from supporters like the Knight Foundation.

Report for America leverages a unique funding match model, paying half of a corps member’s salary, while encouraging and supporting its local news partners to contribute one-quarter, and local and regional funders to contribute the final quarter.

For example, the North Carolina Local News Lab Fund, an initiative of the Democracy Fund, gave $40,000 this year to seven Report for America newsroom partners across North Carolina, getting them off to a running start on their fundraising for the year.

“Local news and information are an essential to the immediate response to this current crisis. Communities need accessible, credible reporting now and for the long term, even as news organizations face unprecedented challenges. Report for America corps members can serve those communities’ needs and catalyze new forms of support,” said Lizzy Hazeltine, fund coordinator, for the North Carolina Local News Lab Fund at the North Carolina Community Foundation.