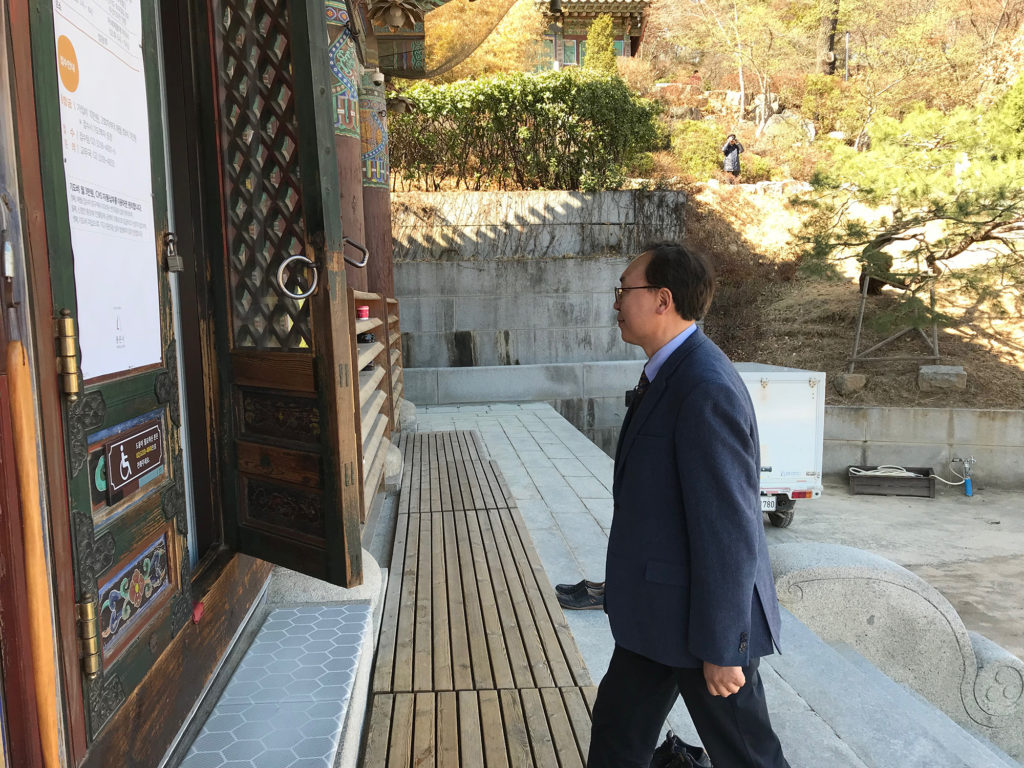 Wonyoung Sohn visits the 1,200-year-old Bongeunsa Temple. He has been advocating for inter-faith understanding, after incidents in which radical Christians vandalized Buddhist temples. (Chris Damien/GroundTruth)

SEOUL— As Wonyoung Sohn, a Methodist pastor and former professor of Christian theology, steps from the bustling Gangnam sidewalk to the temple grounds, he makes a confession.

“This is my first time here,” he says in his shy, broken English.

Sohn walks around the Buddhist temple’s ornate campus with the enthusiasm of a foreign tourist despite having spent most of his life in Seoul.

But Sohn didn’t visit the 1,200-year-old Bongeunsa Temple out of simple curiosity. He was fired last year from his professorship at Seoul Christian University after leading a controversial fund-raising campaign to repair a Buddhist temple vandalized by a Christian zealot.

The timing seems divinely ordained, at least to the faithful. First there was the historic summit between North and South Korea — in which both countries set goals for nuclear disarmament and officially ending the Korean War. And the 100-year anniversary of Korea’s defining March First Movement — something like Korea’s Declaration of Independence from Japanese colonialism — is approaching in 2019. Sohn’s crusade for inter-religious peace is undoubtedly benefitting from the social momentum surrounding these events, yet resolving religious conflict is no small task.

While Korea’s religions have generally coexisted peacefully, the nation has seen a steady stream of Protestant intolerance toward Buddhism — some of which has resulted in the destruction of valuable temple property.

And with 64 percent of Korea’s national treasures being Buddhist cultural artifacts, these acts of religious hate amount to more than bigotry.

“There was a vandalism event at Dongguk University, back in 2000,” Lee remembered. A cross was spray-painted on a revered statue of the Buddha and the words “only Jesus” tagged in Korean on the steps below.

For Sohn, such acts of religious hate are inconsistent with his Christian faith — a belief that has changed the course of his career.

In January of 2016 a man vandalized the main hall of Gaeunsa Temple in the industrial town of Gimcheon. The attacker verbally assaulted the resident nun, destroyed the temple’s statues, and ultimately caused $100,000 in damage.

“I felt sorry as a Christian,” Sohn said through a translator. “I was deeply ashamed of the fact that the intruder simply followed the teachings of a pastor who received theological training and ordination.”

Sohn wrote a public letter of apology on Facebook and started a fundraising campaign to cover the temple’s repairs. The temple’s administrators, to his surprise, encouraged him to use the funds to facilitate interreligious dialogue. Sohn got to work.

He organized a conference on religion and peace, gathering Buddhist and Christian scholars to openly discuss their faiths as well as conflict. He laid the framework for an event celebrating 2017 as both the 500th anniversary of Luther’s Reformation and the 1400th birth year of Won Hyo, a patriarch of Korean Buddhism.

“Professor Sohn is a civil servant,” said Doheum Lee, a professor of Buddhism and philosophy at Hanyang University, who has participated in Sohn’s interreligious conferences.

While Sohn garnered diverse support for his efforts, the conservative administrators of his own school voiced their opposition.

“The board of trustees and the chancellor were against me,” Sohn says. “They tried to smear my reputation by saying that I had joined a cult. They said I violated the mission statement of the university.”

With tensions mounting, several professors from the university urged him to resign to secure benefits for his family and future. He went as far as to draft a letter of resignation, but hesitated before submitting it.

“If I resigned it would mean I admit to the school’s accusation. As a Christian, I chose to stand up for what I believe in,” Sohn said.

In a notice obtained by GroundTruth citing its reasons for dismissing Sohn, Seoul Christian said Sohn’s teachings were at odds with the university’s theology — causing confusion for its students. It further states that Sohn failed to keep his promises to reform himself, cease his political activism and align with the school’s theology. As a result, the university fired him.

As Sohn’s professional life was thrown into disarray, political life in Korea was similarly in turmoil. Sohn was an ardent participant in the Candlelight Protests against corruption in former President Park Geun-hye’s administration — who was recently sentenced to 24 years in prison as a result of the subsequent investigation.

“The Buddhist and the Christian, we do small prayers and work to build up the world in a healthy way,” says Sister Catherine of Seoul’s Anglican Order of the Holy Cross. As a supporter of Sohn, she says, “If we work together it is better.”

In late 2017, Sohn unveiled an interreligious Declaration of Reformation. With 3,000 supporters, the Declaration outlines a commitment to root out corruption in Korea’s Christian, Roman Catholic, and Buddhist congregations and to inspire the faithful to advocate for peace and reunification.

“In 1919 there were 33 leaders who declared independence from Japan during the March First Movement. All of them were religious,” Sohn says. “Next year is the one-hundred-year anniversary. It is time for religious people to stand up again.”

He is currently appealing his termination through the courts, and Sohn’s interfaith allies are encouraged by his dedication.

“We are hoping that Sohn doesn’t win his trial,” jokes William Lee, chairman of the Buddhist Korea-Bhutan Friendship Association. “We don’t want him to go back to the quiet life of a Christian academic.”

While Sohn believes that with more unity among religions will come greater social influence, he is clear that he is not intending for religion to control society. Rather, he believes Korea’s diverse religions can transform the nation’s soul to make way for reunification.

To this end, the Declaration pushes religious leaders to root out the “accumulated evils” of “chaebol churches” that act like for-profit corporations, Sohn Says. “To embrace, not neglect, their social responsibilities.”

It is a call for the return of Korean religion to the prophetic role that many believe it played in the nation’s birth.

“Since our Declaration, we started to pray across religions. We’ve had good Olympic games.” Sohn says with a smile. “We believe this is the result of our prayers. We need to revolutionize our religious groups. Our revolution will be the unification of the people.”