ON THE GROUND IN PARADISE, CA

Rekindling community a year after the devastation of the Camp Fire 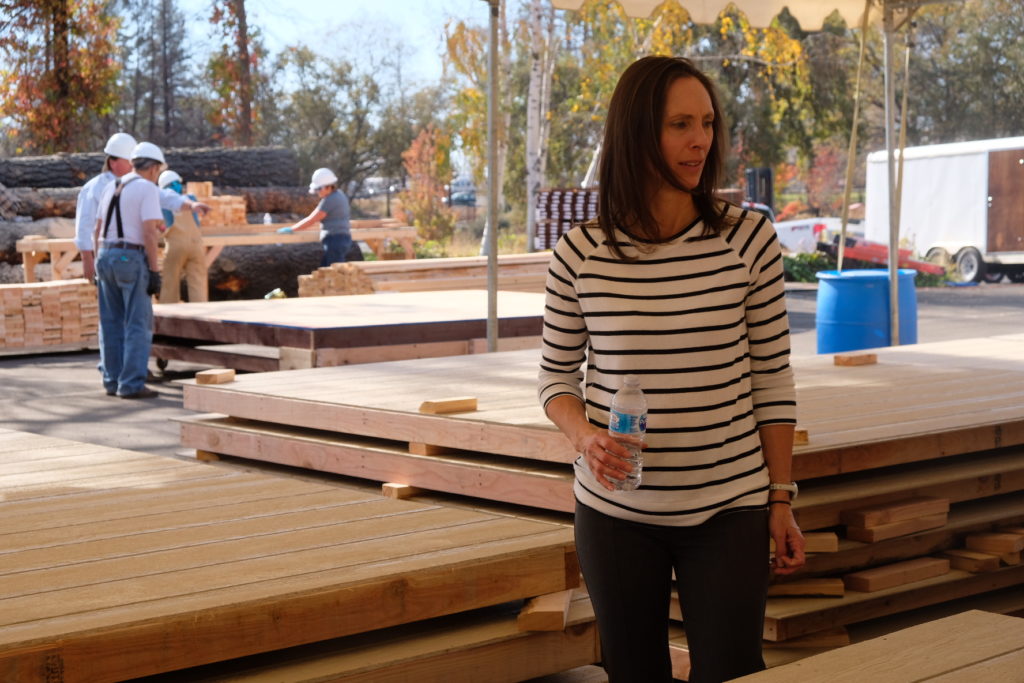 Joelle Chinnock, secretary of Love Paradise, checks in with volunteers building sheds for Camp Fire survivors in Paradise, Calif. on Nov 7, 2019. This is one of the many community-based projects she’s thrown herself into after the disaster. (Photo by Camille von Kaenel/GroundTruth)

PARADISE, Calif. — In October, hundreds more Californians joined the ranks of those who’ve lost homes and businesses to wildfire. Hurricane-force winds blew flames through the vineyards of Sonoma County and the chaparral on the outskirts of Los Angeles. The media told a tale of grief, chaos and destruction. It was dramatic enough for some to start questioning why people were living in California at all.

Around the same time, a completely different scene was playing out hours north in Paradise, which was similarly in the spotlight a year ago. On Nov. 8, 2018, winds blew a spark from Pacific Gas & Electric Corp. equipment into bone-dry trees, and then into pretty wooden homes in Paradise, Concow, Magalia and other remote communities in Butte County. The Camp Fire became the deadliest and most destructive fire in California history, burning 14,000 homes and killing 85 people.

Last month, on a warm fall weekend, a group of volunteers met in Paradise Community Park, sipped on donated coffee and put on “Love Paradise” T-shirts and work gloves to pick up pine needles, leaves, branches and trash from the town’s streets. The organized trash pickup is just one example of the regular volunteer-based events related to recovery in the region. Television crews and journalists were arriving again to document the aftermath of the fire, and residents wanted them to see a clean town.

A year after the Camp Fire, the 35,000 people permanently displaced are in very different places on the path of recovery. There are unexpected hurdles in the burn scar, like persistent toxic contamination in parts of the water system and frequent blackouts. Now, trailers dot clean dirt lots. So does new construction: nineteen homes have been rebuilt and nearly 400 permitted. More than 200 businesses have reopened.

Joelle Chinnock, who organized the trash pickup as a volunteer with Love Paradise, a local organization, fled the fierce flames a year ago. Her home was one of several thousand in Paradise to survive almost intact. She was able to move back one month later. Her kids, whose friends were scattered all over the state, found some normalcy in the park. Some days, she thinks life would have been easier had her home burned down and given her a fresh start, with a good insurance payout and time away from the toxic remnants of her town. Other times, she thinks she’s lucky she didn’t lose everything, like some of her friends. She feels an obligation to help. Many do. They have stepped up.

“Sometimes I don’t know what we’re doing but we get up and run, and we keep running,” she said. “In the process, we’re helped and we’re healed, and we find more strength to do more and help others heal.”

The winds since trash pickup day have knocked down burned trees and blown debris back all over the streets. I asked Chinnock if it had been a futile effort. She sighed. “No,” she said. At least some of the trash had been removed. The kids got to play in the bounce house. Neighbors got to see each other.

“We all have been through the most horrific thing in our lives, so you instantly have a bond, and I’ve never been in a place where I’ve felt that before,” Chinnock said.

The story of solidarity that sustains a community during recovery is not as widespread as the story of the drama of the disaster itself. As a local reporter for the Chico Enterprise-Record, the daily paper in Butte County, I see it every day.

Events like the trash pickup, but also celebrations like an annual parade in honor of the area’s Gold Rush history or a series of concerts in the park, are bringing out record audiences. Thousands pack the high school football stadium to cheer for Paradise High School’s Bobcats on Friday nights. Town council meetings on a long-term rebuilding vision overflow with newly-engaged citizens. New neighborhood captains distribute information and organize block parties on near-empty streets. Residents of Magalia, which partly burned, are rallying around an idea for a park. In Concow, neighbors share a sawmill to create their own lumber from burned trees. For some, it’s the second time in a decade that they’re rebuilding after a wildfire.

Wildfires have, after all, always been a part of California. The landscapes are adapted to regular fires and indigenous people have long used fire as a tool to manage forests. But theres are a few factors that have turned recent wildfires into catastrophes. The natural cycle of fire was interrupted by nearly a century of federal policy requiring fires to be put out as soon as they sparked, leading to overgrown forests ready to burn. Climate change has turned California into a tinderbox. Mismanaged electric utility equipment sparks fires during high winds. Two million homes in California, or one in seven, are in locations at high or extreme risk for wildfire, according to one estimate from the Insurance Information Network of California and Verisk Insurance Solutions, and more are planned.

A lot of these threat amplifiers can be mitigated. But fires will continue to happen. That makes a collective ability and will to not only survive, but to thrive, through repeat disasters, like the one I’ve seen emerge from community events in Butte County, all the more important.

As for this year’s fires? They’re almost entirely contained. The winds have subsided. But there’s no rain on the horizon, yet.

Camille von Kaenel is a Report for America corps member covering the environment for the Chico Enterprise-Record & The Ukiah Daily Journal. A version of this essay appeared in USA Today as part of a series called “On the Ground,” supported by The GroundTruth Project. Follow Camille on Twitter @cvonka.

Correction: The Center for Insurance Policy and Research was previously cited as the source of the estimate that “two million homes in California, or one in seven, are in locations at high or extreme risk for wildfire.” This estimate is from the Insurance Information Network of California and Verisk Insurance Solutions.

A version of this story appeared on USAToday on November 21, 2019