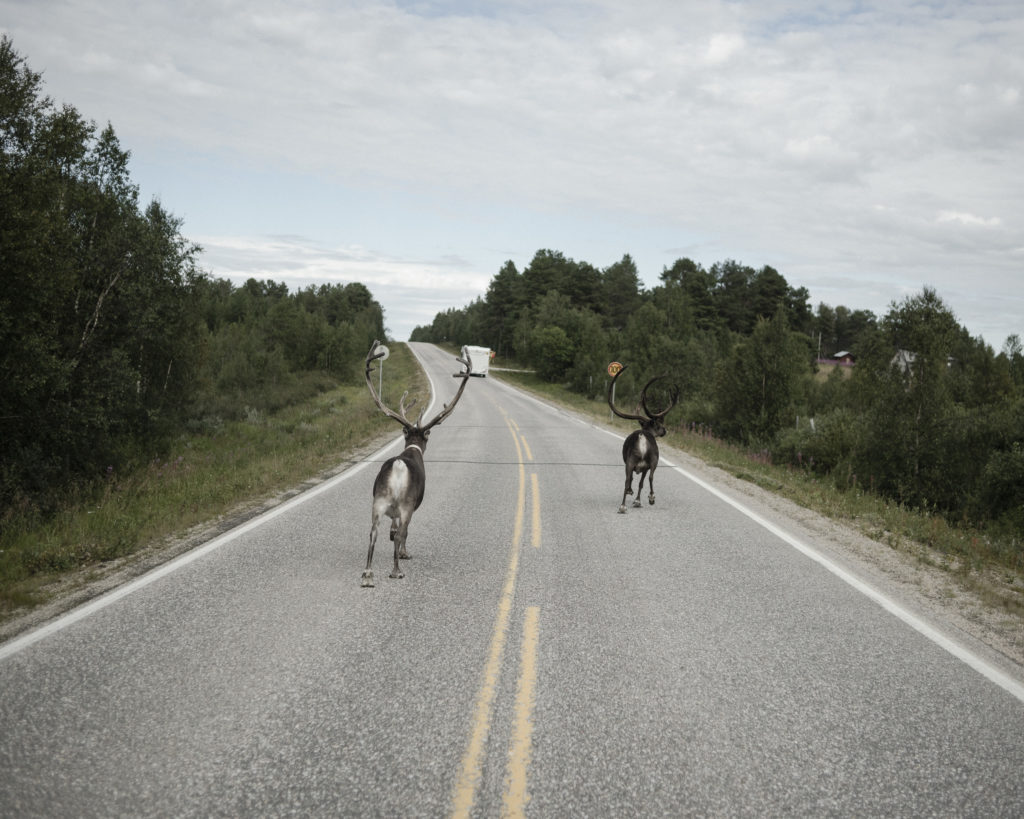 Reindeer crossing the street is not a rare sight driving on the roads in northern Scandinavia. (Camilla Andersen/GroundTruth)

KARASJOK, Norway— “This is a spring and summer treat,” says Arvid Gaup, the father of a reindeer herder in this remote town in northern Norway. He sets a haunch of freeze-dried reindeer, known as goikebiergu, on the table and begins carving off slivers of jerky.

To prepare the meat, the Gaups deboned a reindeer carcass and then cut it into strips – about 24 inches long and 3 inches wide. From January to April, the reindeer meat hangs from the balcony of their home, covered by a fish net to keep the birds away.

Reindeer meat is central to life in northern Scandinavia, a region known as Sápmi to the indigenous population called the Sámi. While only a small percentage of the Sámi community rely on reindeer meat for economic growth, nearly everyone eats it.

Arvid describes how he often stirs the rich fat from reindeer jerky into his coffee instead of cream—a Sámi latte, if you will. Anna Ravna, his wife, points out that the meat has as many omega-3s as fish, with plenty of collagen for repairing skin and bones. Plus, the jerky is perfect for traveling long distances and camping in the summer grazing lands, the Gaups say.

Cured, salted, smoked, grilled. Boiled, stewed, stir-fried. Served as paper-thin slices of jerky, as a juicy burger, as salted and smoked barbecue — even as a topping on pizza.

But for every way to prepare reindeer meat, there is one threat to this traditional Sámi staple—climate change.

Extreme storms, such as the one that killed more than  300 reindeer in Norway earlier this month, have become more and more common. In some places, the very ground is melting. In Russia, spores from long-buried anthrax victims have sickened dozens of people and spread quickly through the reindeer herd.

In Scandinavia, perhaps the most pressing concern is the fluctuation in weather. In winter, for instance, it might be stormy one day and sunny the next. Volatility creates layers of melted snow and ice. The reindeer have trouble digging through all of these layers to reach food underneath, and many starve each year.

Scandinavian countries are among the world’s most food secure. Food security means that every household is able to find nutritious food to meet their needs; they don’t have to worry about where their next meal will come from.

Unlike some Arctic communities, where finding enough nutritious food is a daily struggle, the Sámi would be able to survive on store-bought food if reindeer disappeared altogether. Yet such a scenario would still devastate the community’s culture.

Beyond the reindeer meat

For the Sámi, veneration for reindeer meat goes beyond food — it’s closely related to identity, to history, to a sense of strength and independence. This food provides a different sort of security; it offers an emotional connection to history and community.

Jon Mikkel Eira is a young herder who lives close to the Gaups. He nurses aspirations of becoming a reindeer chef.

“Sámi cuisine is slow food,” he explains. “You have to have time to make it.”

For example, you must slaughter a reindeer, clean its intestines, and boil the blood before you can even begin to make blood sausage. Not exactly fast food.

“We only have one spice, which is salt,” Eira says. His favorite dish is the traditional stew, with boiled meat and a few potatoes.

“There’s a lot of traditional knowledge in Sámi cuisine that’s dying fast,” he says. Eira sees food as a way of holding on to his heritage and sharing it with others. Each meal is a nod to his Sámi identity.

Climate change is pushing reindeer to the brink of survival. But herding families like the Gaups and Sámi foodies like Eira are pushing back. For them, adapting to environmental changes means focusing more than ever on keeping tradition alive. As with many other parts of Sámi life, that starts with food.