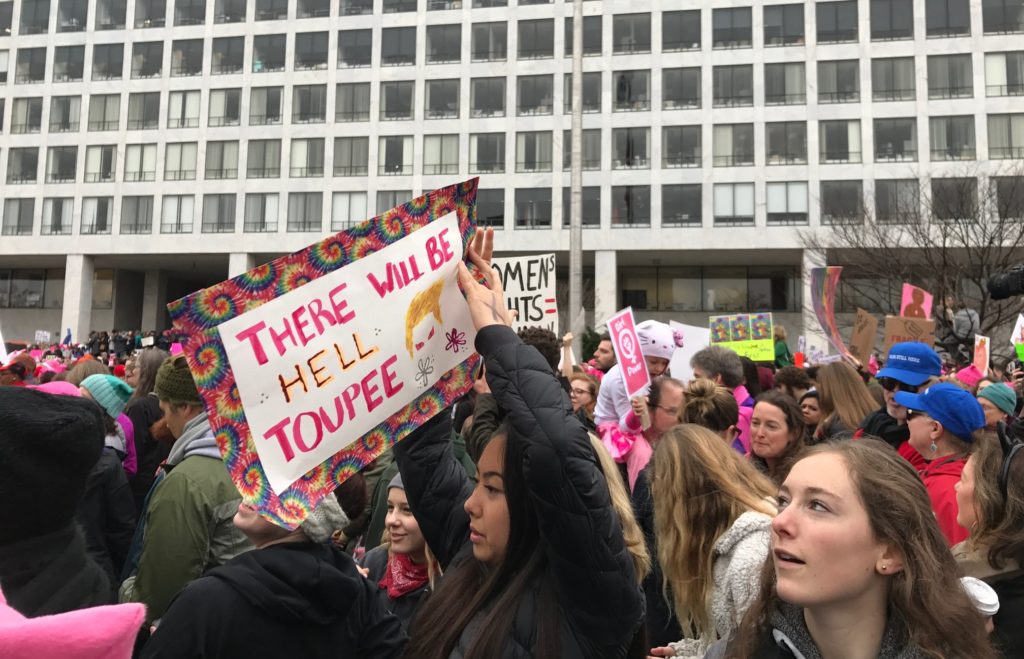 WASHINGTON — Overnight, the capital transformed from the lower energy of President Donald J. Trump’s inauguration to the high-energy scene of the Women’s March as the city hosted its largest inaugural demonstration in U.S. history Saturday.

A wave of 500,000 women, men and children represented a peaceful force that flooded Washington. Many were brightly adorned in pink “pussy hats” and colorful costumes, wielding clever and often beautiful signs. There were passionate chants and dozens of speeches as marchers expressed an unprecedented depth of opposition and revulsion to essentially every aspect of Trump’s proposed policies, his personal conduct and his appearance.

On his first full day as president, Trump’s obscene comments about women, his hair, hands and tanning regimen were all up for grabs as marchers seemed eager to show the famously thin-skinned leader that they’d make his time in office as uncomfortable as possible. Signs like “Love trumps hate” and “There’ll be hell toupee” dotted the sea of Trump opposition. Several women carried a version of “This pussy grabs back,” in direct reference to the president’s obscene comments captured on tape.

“I wish you could see yourselves. You’re like an ocean,” said march co-chair Gloria Steinem, who received jubilant applause Saturday morning in calling upon the still-assembling crowd to ready themselves for a campaign that could last years.

“Sometimes, we must put our bodies where our beliefs are. Sometimes, pressing ‘send’ is not enough,” said Steinem, the icon of feminism who has protested on behalf of women’s rights for the better part of a half century, as a column of giant television screens carrying her image down Constitution Avenue.

Finding inspiration in one another, generations of women took the leading role in the march on Washington and hundreds of “sister marches” around the world. Drawing an estimated 3 million people worldwide, who took the day to stand up for modern democratic values including civil rights and the international order, march organizers surprised the world with record turnouts in cities from Los Angeles to London.

The Trump administration has indicated that it will ferociously move to undo decades of progressives’ work on civil rights, health care, climate change and global aid. Signs like, “I can’t believe I have to fight this shit again” were common among older demonstrators who have opposed conservative administrations before.

Her audience expressed a mix of grave concern and hope that Trump might inadvertently be galvanizing an opposition movement that could in the end of the day spell his undoing.

“We did wait to see what Trump would do. And he showed no respect for the diversity of our country,” said Anna Vogel, 24, who had traveled to Washington from Columbus, Ohio with her family.

“We’re here because we are going to stand up to Trump no matter what he does. What’s interesting is all the different issues people care about, and that we are all together,” she said, adding that she’d supported Hillary Clinton in the presidential election. Almost finished with college, Vogel expressed a hope to contribute to society with a job that “helps people” but that “fits in with the economy.”

After hours of speeches and a packed march route that required extra patience for thousands who stood waiting until the path was clear, adrenaline still coursed among those assembled in the park adjacent to the White House on Saturday afternoon while Vogel spoke.

She had been part of a group of young women taking turns reading aloud the Declaration of Sentiments, produced at America’s first-ever women’s rights conference at Seneca Falls, New York in 1848. The declaration helped lay the groundwork for decades of advocacy for women’s suffrage, not achieved nationally until 1920. Nearly 100 years after that milestone, the fight for gender equality continues today.

As hungry travelers hurled last insults and raised middle fingers toward the White House’s new occupant, the building’s facade glinted in the twilight.

“[B]ecause women do feel themselves aggrieved, oppressed, and fraudulently deprived of their most sacred rights, we insist that they have immediate admission to all the rights and privileges which belong to them as citizens of these United States,” Vogel read. The words were written nearly 170 years ago and remain strikingly relevant today.