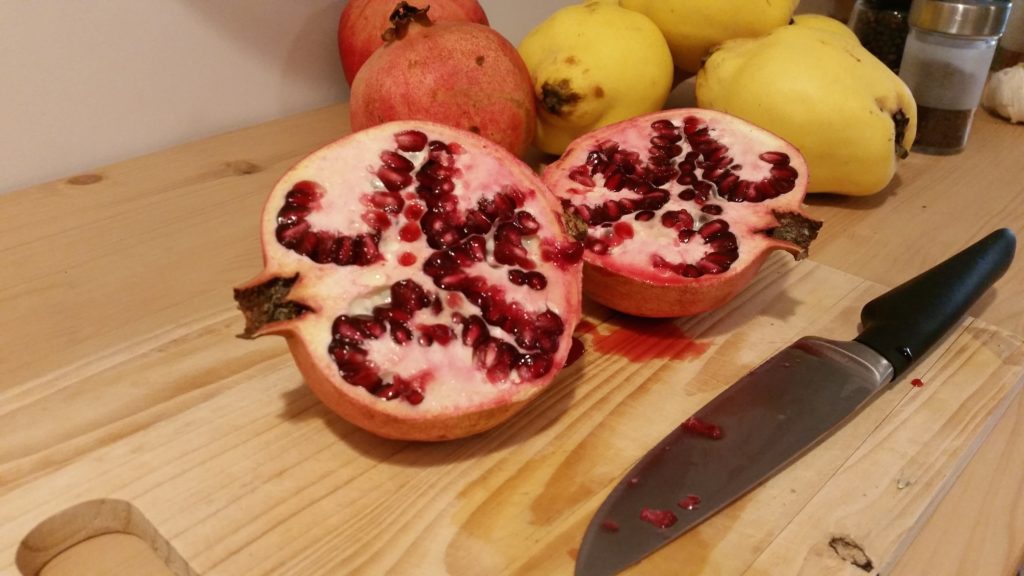 Adapted from Anissa Helou’s Levant: Recipes and Memories from the Middle East.

Saffarjaliyya, a tangy stew of quince, lamb and pomegranate juice is traditionally made with lamb chunks and kibbeh ground lamb and pine nuts stuffed in a shell of bulgur and ground beef and shaped into balls. But kibbeh is labor intensive and can be intimidating, so I’ve adapted the recipe to just include chunks of lamb shank.

I also used some tips from other home cooks to add some tomato paste to give the dish a deeper color and flavor. For a traditional recipe that includes kibbeh, consult Anissa Helou’s cookbook, Levant: Recipes and Memories from the Middle East. For one that includes tomato, here’s a great step-by step recipe on Orange Blossom Water, a food blog run by a Syrian home cook named Dimah.

750 g lamb, taken from the shank and cut into 2-inch cubes

Quince sauce: Take the pomegranate seeds and pulverize them in the food processor. Strain and reserve the juice.

In a medium sauce pan, put sugar and water over medium heat and add the chunks of quince, stirring to get them coated in the mixture. Cover and let simmer for 15 minutes.

Add the pomegranate juice. Simmer for 30 to 45 minutes. The quince should be soft enough to be easily pierced with a fork, but not so soft that it’s falling apart. 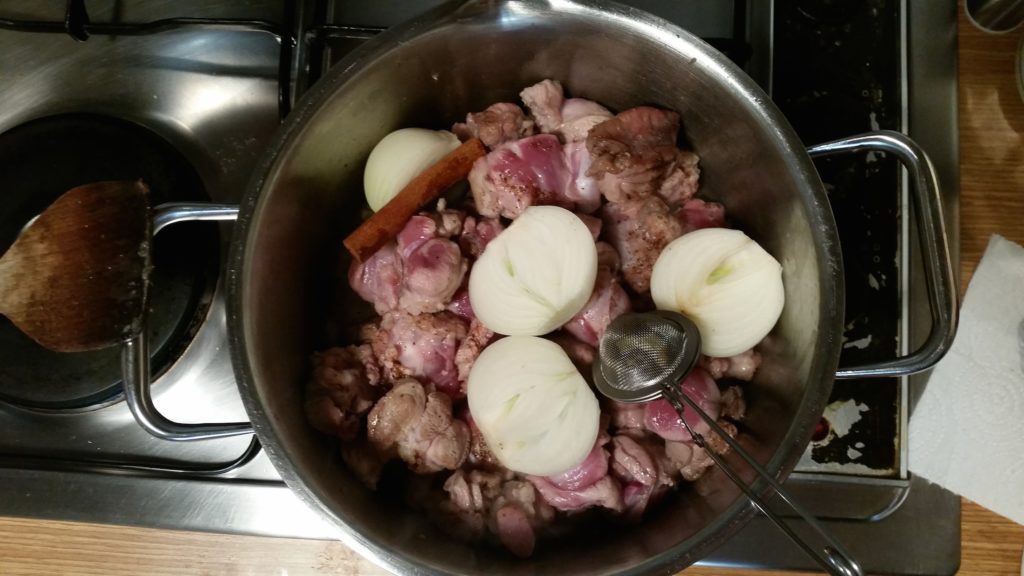 Lamb and broth: In a large pot, heat the ghee. Add the lamb and sprinkle with spice mixture and salt. Add the tomato paste, if using. Toss the lamb chunks until thoroughly coated in tomato paste and ghee and the outside is browned but don’t cook it all the way through. Add water until the lamb is just covered.

Use a small tea strainer or sachet for the cardamom pods, cloves and peppercorns (it’ll make it easier to remove the spices from the broth later – otherwise, they’ll need to be scooped out with a slotted spoon or a strainer). Add spices, cinnamon stick and onions to the pot. Bring to a boil, turn the heat to low and allow to simmer for an hour.

Assemble: If the lamb has a lot of broth, remove one or two cups and reserve for later use. You want the lamb chunks just barely covered in liquid. With the heat on low, add the quince sauce to the lamb and stir. Taste it – if it tastes really fruity, add back some of the broth. Do that in small quantities – about a quarter cup at a time – and keep tasting until there’s a balance of sweet, tangy and savory flavors.

With a mortar and pestle – or even just with the back of a spoon – mash together the dried mint and garlic. Add to the pot. Let simmer about 10 to 15 minutes more.

Serve hot in a soup bowl.