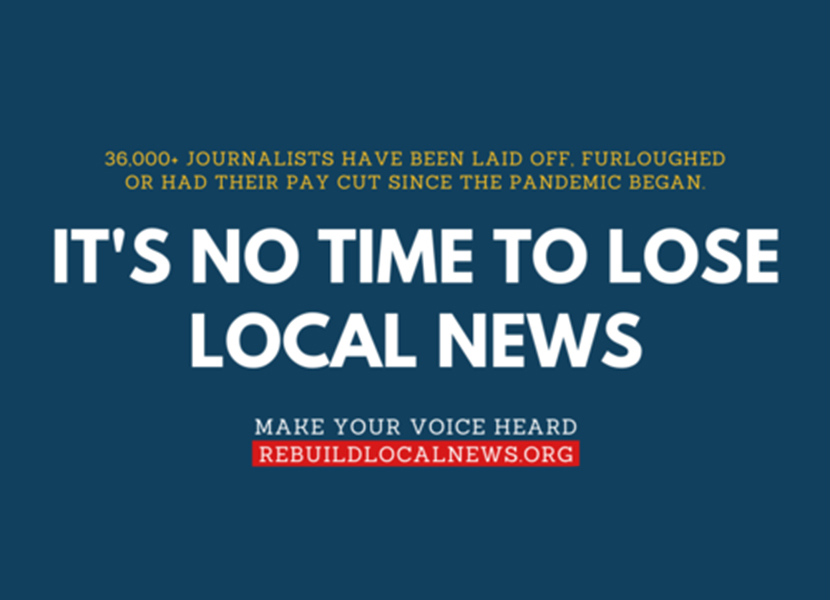 A coalition representing more than 3,000 local newsrooms today took the unusual step of backing a plan for the government to dramatically help local news while maintaining strong First Amendment safeguards.

“This very broad collection of news organizations came to the conclusion that government action is urgently needed and that it can be done in a way that preserves editorial independence,” says Steven Waldman, the president and co-founder of Report for America, who coordinated the coalition’s efforts. “The collapse of local news fundamentally threatens democracy and the health of communities. The country must confront this crisis.”

The plan attacks the problem by offering proposals around these broad strategies:

1.    Empower Americans, through their own choices, to financially help local media

The heart of the proposal is a system of tax credits that would provide up to $250 to Americans to help buy local news subscriptions or donate to local nonprofit news organizations (a variant of the bipartisan bill, the Local Journalism Sustainability Act).

The full plan can be found here.

The group emphasized providing aid to consumers and business so they could support local media, and emphasized policies that helped locally-owned for-profit and nonprofits to develop long-term sustainability.

Representatives of more than a dozen organizations have worked for the past five months to come up with a plan that would earn the backing of this disparate range of groups while still having a major impact. The groups backing the plan include:

Although it is difficult to assess the cost, the group conservatively estimates that it would add at least 20,000 reporters, double the current amount. The cost would likely be less than the amount currently spent by the U.S. Treasury to underwrite business lunches and entertainment.

In shaping this plan, the coalition was guided by these principles:

●     Be future-friendly, potentially providing help to both existing local players and innovators.

Some of the proposals build off existing pieces of legislation, especially the bipartisan Local Journalism Sustainability Act, introduced by Rep. Ann Kirkpatrick, a Democrat from Arizona, and Rep. Dan Newhouse, a Republican from Washington.

“Community newspapers have been the sources of news reporting for America’s cities and towns for centuries. Now we find the economic changes in our country require new paths to sustainability,” said Brett Wesner, chair of the National Newspaper Association, and president of Wesner Publications in Cordell, OK. “Congress needs us as much as we need sound public policy to undergird a thriving democracy, oversight of public institutions and sound government.  The coalition is shining a light on a need that must be recognized and addressed urgently.”

“There is an urgent crisis in local news in America that requires bold responses,” said Jim Friedlich, CEO of The Lenfest Institute for Journalism, a nonprofit organization dedicated to supporting local news. “This plan is both ambitious and practical, using tax policy, government spending and other incentives to meaningfully help local news while ensuring editorial independence. This is the most forceful proposal of its type in memory, and both our industry and our country stand to benefit.”

“Our country is facing an urgent question: how do we ensure communities have the information they need?” said Sarabeth Berman, CEO of the American Journalism Project. “We join this coalition to ensure that the government takes action in order to sustain local journalism as a vital public good.”

“Public Knowledge believes that it’s possible for the government to support the essential role of local journalism in our democracy, while preserving First Amendment safeguards that ensure a free press,” said Lisa Macpherson, senior policy fellow at Public Knowledge. “This proposal shows us some ways to do so. We’re proud to join these news organizations in a proposal that seeks to empower citizens, help small businesses, encourage innovation, and seed sustainable business models for journalism in the future.”

The effort to develop public policy was supported in part by Democracy Fund Voice and The GroundTruth Project.