To rebuild Iraq, invest in its children 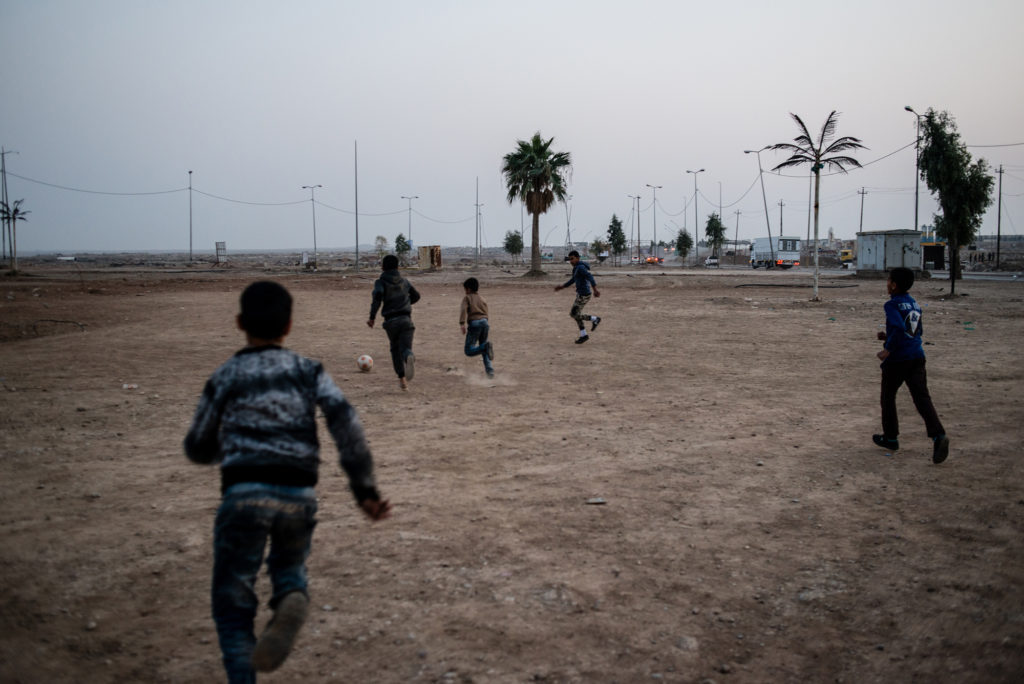 MOSUL, Iraq — In mid-July, as soon as this devastated city was declared “liberated” from ISIS, the bulldozers moved in to begin clearing the rubble which was, in many places, all that was left. For months, the work continued in Mosul’s Old City: the sound of the heavy machinery moving debris and scraping a clear path echoed through the ancient, narrow alleyways. Few families have returned, and those who have need permission from the local authorities, as the retreating ISIS fighters left much danger behind. Some homes still have IEDs, others have bodies.

The Chatwal family recently returned from a refugee camp an hour south of Mosul to their home. They found it mostly intact. But the building nearby that was supposed to be a new school is still in ruins.

“If you’re looking for stories about children, all of us can tell you stories that will make you cry,” said Marwan Chatwal, a white-bearded elderly man whose sons live in his house with their wives and children. “When ISIS was here, the kids couldn’t go outside, and they were all getting sick from their dirty water,” he continued. “The ministries never come here to ask about us. This is a poor area, and everything is destroyed. Everything we have, we have lost it. We don’t even have enough money to get clean water for our kids.”

Some of Marwan’s family died in the bombardment, but those who survived are either injured, sick, or simply unable to obtain the services to rebuild their lives. Stories like the Chatwal family’s are common throughout Mosul and other areas where Iraqi forces, backed by the U.S. and allies, pushed ISIS out of their former strongholds in a year-long, massive military offensive. This multi-national campaign killed many ISIS fighters and some of their leadership, forcing many more of their supporters underground in Iraq or across the border into Syria and Turkey, or beyond into Europe.

Although the conventional lines of battle have largely quieted, the consequences of the long siege by ISIS and the massive destruction caused by the counter-insurgency campaign — mostly in the western part of the city — are coming into sharper focus, particularly for the millions of children displaced by the fighting and for the future of Iraq, which they’ve come to embody.

At the Kuwait conference this week, UNICEF and UN-Habitat recently presented their joint paper Committing to Change, Securing the Future. The paper details a number of points to focus on in the reconstruction of Iraq, and how focusing on the needs and rights of children is the key to stability and a flourishing nation.

Over five million children are displaced from their homes, either to other cities or in camps across northern Iraq. While humanitarian organizations have a wide network of aid — both through their own efforts and subcontracting local organizations for hard to reach populations — there remains a gap between what is needed, and what is supplied, especially for youth.

According to the report, “For children to thrive, a successful transition requires restoring essential basic services…and rebuilding shattered infrastructure. It is equally critical to…rebuild trust in communities.” The report details five key areas where investment cannot fall short if Iraq’s future generation is to be one of confident community builders, rather than one of struggling impoverished individuals: supporting reconstruction, pushing education, easing poverty, providing opportunities, and addressing psychosocial needs.

Mosul — what’s left of it — has come to symbolize of the future of Iraq itself. The post-ISIS reconstruction period has the ability to succeed: to rebuild structures, industries, and relationships in order to support future generations with a strong societal footing. It could also just as easily fail: if the nearly $88 billion (a likely highly underestimated sum) expected to rebuild Iraq is squandered, Iraq will remain in ruin, ready to return to it’s insurgent past with little hope for the return of a robust civil society.

There is a stark difference between the landscapes of East and West Mosul. In the East — where there was little large scale damage — for all visible purposes, life has returned to normal. The West was not so lucky. The older and more conservative side of Mosul took the brunt of airstrikes and civilian casualties, especially in the nearly-flattened Old City. The reconstruction of this part of Iraq and the rebuilding of so many broken lives seems a long way off, particularly for the young people who are returning to the city.

In Mosul alone, nearly everything in certain areas must be reconstructed — roads, water systems, power grids, homes, schools and hospitals. So where to begin? The physical reconstruction is well underway, and many schools have reopened, but the final three areas are more difficult to address. Though Mosul is known as one of Iraq’s most industrious cities (a characteristic easily seen in families who returned to their destroyed homes, only to rebuild them as soon as the battle was over), the economy is still recovering. Families in poverty remain so, and now there are even more widows with little economic power to provide for their children. There are very few work opportunities for youth, leading some young men to join local militias. And like the rest of the Middle East, psychosocial issues are addressed more often through prayer than through therapy.

The U.S.’s role in the Mosul offensive contributed largely to ousting the terrorist group, but it also caused significant structural damage and casualties from airstrikes on ISIS, when they used families as human shields. Despite this, the U.S. does not plan to contribute any financial support to the rebuilding of Iraq, directing funds instead toward Afghanistan. According to a report from Reuters this week, Jeremy Konyndyk, the former head of USAID Foreign Disaster Assistance office said, “We’ve seen this movie before. There is a very real risk if the U.S. doesn’t put money into reconstruction, that having just won the battle, you lose the peace.”

And herein lies the danger: governments were more than happy to put billions of dollars into destroying the terrorist group, but if they do not support the reconstruction for the next generation, they are partially responsible for the success or failure of those youth.

On February 14, Save the Children released an extensive report drawing on nearly thirty years of data analyzing the effect of conflict on children. Of the 357 million children living within 50 miles of an armed conflict (1 out of 6 globally), those in Iraq live in the 7th most dangerous place in the world for children, where they are at risk for maiming from IEDs, militant recruitment, attacks on schools and educators, and denial of humanitarian access. Iraq has the potential to move off this list, but that depends not only on the will of the people, but those willing to invest in the next generation.

These statistics, among other stories, were presented at the Kuwait International Conference for the Reconstruction of Iraq, a three day event that brought together global heads of NGOs, UN agencies, and government officials, including U.S. Secretary of State Rex Tillerson, to determine how to pick up the post-ISIS pieces of Iraq. This endeavor is estimated to cost over $88 billion.

General Watheq al Hamdan of the Nineva Police spoke of the challenges for young people after the war, particularly those in Mosul. “We have…kids who were damaged by ISIS…there are kids in camps, and they have [physical, psychosocial] services. But the kids here in the city are difficult to reach, they have very little.”

On a recent Wednesday evening at Baghdad circle, the entrance to West Mosul, half a dozen young men played football on a traffic circle, while another half dozen crowded around cars, offering tea, coffee, and biscuits, smiling at the sight of every new customer. They were asked if they were supposed to be in school. They have to work, they all chimed in chorus. Most come from poorer families in West Mosul, where even though some schools have reopened, they must instead provide for their families. As the sun set, they dropped their biscuits and thermoses, joining other boys playing football.

While boys like these may enjoy evenings with their friends, they will likely return to homes missing windows, family members, and the assurance of a secure future. The Iraqi and U.S. governments may have declared victory over ISIS, but the war and its consequences are from over.