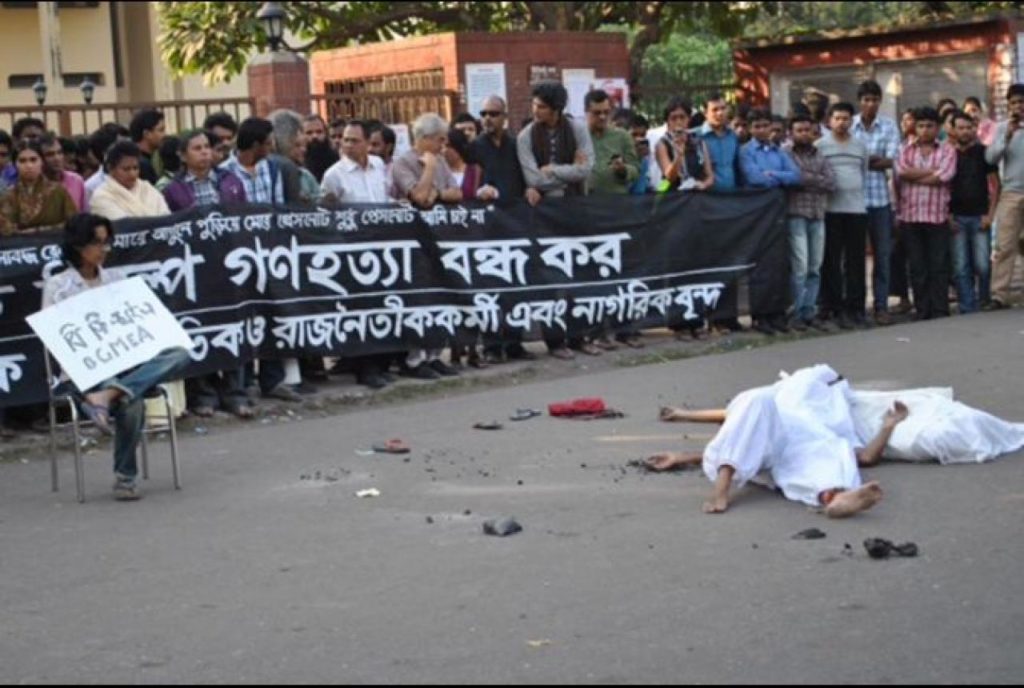 A few protesters, dressed in white, lay on the street as corpses in front of a sitting protester who represents the BGMEA, the garment industry's trade body. - ((Tazkira Sattar / GlobalPost))

DHAKA, Bangladesh— They are still trying to count the dead here.

More than a week after the worst factory fire in the country’s history killed at least 112, there are still unsettling questions in the charred rubble. Labor activists are painstakingly tallying the names of the missing to prove that the official death toll significantly downplays the scale of the tragedy.

The 112 confirmed dead, almost all young women, perished at the Tazreen Fashion factory in the industrial district of Ashulia last Saturday evening when a fire consumed the nine-story building where hundreds of garment workers were busy assembling merchandise for some major retailers in the West, including Walmart, Sean Combs’ Enyce and Dickies.

The deadly blaze is the latest in a series of garment factory fires in Bangladesh, one of the world’s leading producers of apparel. Bangladesh has become a battleground for labor organizers and workers who say that in Ashulia, human life often seems to be worth less than the cost of the garments made here.

Minister Obaidul Quader stated in the immediate aftermath of the blaze that those who were charred beyond recognition would be buried in a mass grave. The government has since backtracked in the face of widespread outrage, but labor leaders say this statement revealed much about the government’s attitude toward its people.

“We are seeing that the government does not think of workers as people,” says Kalpona Akter, a labor rights activist who heads the Bangladesh Center for Worker Solidarity. “They were only thinking about how to bury them, how to make the problem go away.”

Often held up as one of the key beneficiaries of a booming industry that has provided them with income and independence in conservative, Muslim-majority Bangladesh, this time the women bore the brunt of the most gruesome consequence of working in the country’s garment trade.

The fire broke out on the ground floor of the factory — its cause is as yet undetermined. The ground floor was being used as a warehouse for highly flammable threads and materials, and the blaze swiftly grew out of control and spread to the workers trapped in the floors above, unable to escape down stairwells that were already consumed by flames.

With the windows barred with iron grills, terrified workers desperately pried open exhaust fans looking for a way to get out, according to eyewitness accounts. Nine plunged to their deaths. Once the fire was tamed it became clear there were many more inside. The official number of casualties immediately became a source of controversy.

“I was hearing that the number of dead bodies was at least 170, probably more. But then [Communications Minister] Quader suddenly arrived and declared that it was 111 dead, and since then that’s the number they’ve been giving out,” Akter says.

With 104 people still reportedly missing, workers have taken to the streets in violent protest, some claiming that the actual death toll could be even higher. Rahnuma Ahmed, a civil society leader who organized a protest demanding justice for the victims of the Tazreen fire, is also concerned that the official figure is too low.

“Given that so many are still missing, questions are being raised about the death toll, about why the names of workers working on shifts have not been made public, have not been tallied… we hear of a crèche, but what happened to the children?” Ahmed says. It is not yet confirmed if children were present at the site in the evening when the fire broke out.

“I still can’t find my girl,” cried Nasima Aktar, whose daughter Imran Jahan Riya was a worker at Tazreen Fashion.

Three mid-level managers have since been arrested, accused of closing gates and telling staff to return to work after the fire had started. But many critics point out much deeper, structural problems that resulted in the high death toll.

They insist that factory owners, the government, and international brands like H&M and GAP — whose business has made Bangladesh the second-largest exporter of garments in the world, behind China — take responsibility for the lives of the people working for them.

“In my experience, it’s very clear that there is a very large discrepancy between what the CSR [corporate social responsibility] mandates are and what actually happens within the factories,” says Ravid Chowdhury, a former fellow with the International Growth Center who conducted research with several garment factories in Bangladesh.

“When the electricity goes out, it’s pitch black and you have no idea what’s going on,” Chowdhury said. “Workers get patted down when they leave. A big concern is that they don’t want the workers to steal the materials, so they limit the exits. I haven’t been to this specific factory but I’ve seen in many factories where there’s not enough exits.”

This year new commitments have come from Western retailers to help reform the garment industry in Bangladesh, with Tommy Hilfiger owner Phillips-Van Heusen pledging $1 million after a fire killed 29 workers in a supplier’s factory and GAP more proactively offering up more than $20 million to displaced workers and vendors upgrading their facilities.

But Rahnuma Ahmed says the industry remains in crisis.

“These deaths can no longer be called accidents,” she says. “These factories have become slaughterhouses.”

Babul Akter, who leads the Bangladesh Garments and Industrial Workers Federation, points out several failures on the parts of the owners of Tazreen Fashion.

“The fact that the ground floor was the warehouse, this was a problem,” Babul says. “The warehouse is not supposed to even be in the same building as where the workers are. Whereas the government permission was for three floors, the factory building was eight floors. There wasn’t even a single emergency light. So these deaths have happened because of the owner’s neglect.”

But the owners are not the only ones trying to evade responsibility, Babul and Kalpona say. Walmart, the Bangladeshi garment industry’s single largest client — accounting for 12 percent of exports alone — is now the target of a chorus of criticism in the country and around the world.

“Walmart denied they did business with Tazreen Fashion,” Babul says. “We had to show proof, only then they accepted their responsibility.”

Kalpona and Babul are demanding that brands like Walmart step in and offer compensation for the victims’ families and those who were injured. Meanwhile, the labor leaders —are bracing for an escalation in government and industry intimidation. The backdrop to the escalating tension between the labor activists and the government-backed industry leaders is the brutal murder of the labor activists’ colleague Aminul Islam. He was killed in April after speaking out about the deplorable factory conditions that are resulting in deaths. The murder remains unsolved.

“The pressure will actually increase now on labor activists,” says Kalpona. “I am being followed around, and I can tell that it’s the security forces. The risks we face are higher now.”

Additional reporting for this story was done from Bangkok, Thailand.

Editor’s note: This article has been corrected. An earlier version stated that GAP clothes were manufactured at the Tazreen factory. GAP confirms that this is not accurate. (Return to text) GAP requested the following statement be appended to our story:
“Our thoughts and prayers are with the families of those who lost their lives and those injured in the terrible tragedy that occurred recently in Bangladesh. While Gap Inc. does not source, nor has it ever sourced, from the Tazreen Fashions factory or the Tuba Group in Ashulia, Bangladesh, the safety of the workers in Bangladesh and throughout the world is something that is very important to us. In Bangladesh, we are implementing our 4-part Fire Safety Action Plan to improve the safety at the factories that do business with our company.”