Q & A with Greenpeace head Kumi Naidoo on the climate struggle 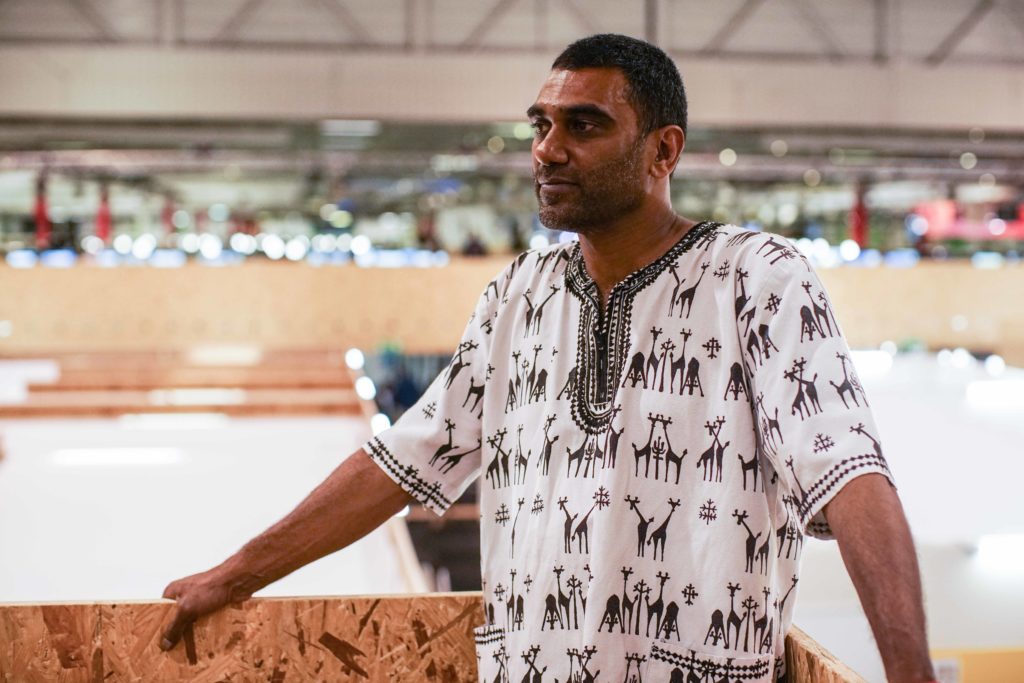 After six years leading global activism campaigns as the head of Greenpeace International, Kumi Naidoo is heading home. He’s returning to his native South Africa at 50 years old, but he isn’t retiring. Sitting down with GroundTruth, Naidoo said he plans to continue pushing for fossil fuel divestment, and fighting nuclear power plants in his home country.

While the United Nations climate negotiations were still underway, Naidoo reflected on his decade in international activism, and what’s needed for the world to tackle climate change.

GroundTruth: Within Greenpeace, there’s a tactical shift towards targeting or at least engaging with financial institutions, as opposed to polluters. What do you tell them, and how do you have a conversation where they’re not dismissive of you? What can big banks learn from a group like Greenpeace?

Kumi Naidoo: Well, you can’t sell it solely on social and environmental concerns. You’ve got to sell it within a business logic. You can start talking about what in the industry these days is called “stranded carbon assets.” Just because you get a license for a coal mine or an oil field or a gas field and you pay money for it, there’s a good chance that the climate realities mean you’ll never be able to dig it out. Because as the momentum for action on climate builds, lots of companies holding concessions for existing fossil fuel projects, my guess is they’re not going to be able to access a lot of them. And I might be sounding crazy for putting faith in this, but even the governor of the Bank of England, he two months ago said ‘I would strongly advise people who are investing in fossil fuels to really think about whether that makes good business sense.’

Banks are scared of us right now. They’re terrified of what climate means for them, as are insurance companies—as they should be.

Just going up the ladder, there’s another angle that I’ve just introduced, which is going after regulatory and central bank. Say if the Federal Reserve in the United States set strong sustainability criteria for all the lending institutions in the United States, that would give you more bang for your buck. All the others would be immaterial if you could win that one. We would not need to go campaign against every individual lending institution.

GroundTruth: Within the environmental movement there’s a lot of momentum, or at least a lot of talk about, capitalism being a barrier to doing anything on climate change. What’s Greenpeace’s position on “capitalism versus the climate,” as it’s being construed? Because it sounds like you’re making a very capitalist argument for action on climate change being based in the same means as those that have gotten us here in the first place.

Naidoo: Everything is in flux and fluid at the moment. There are many people in Greenpeace, including myself, who have very serious fundamental concerns about the dominant socioeconomic paradigm that we have. One of the strategic objectives of Greenpeace is to challenge the socioeconomic paradigm. That’s one of the things I brought to Greenpeace, which was accepted at our first global meeting in 2010 after the failure of Copenhagen. There’s no question that we will not be able to address the challenge of climate change within the current capitalist system. There’s no question about it. However, what does that mean in practical terms?

Now the business community, many of the more progressive elements, are saying we have to do more with less, we have to be conscious of our carbon footprint, we’re going to look at how we access our energy and all of that. All of this is good, but we have a fundamental contradiction. In the DNA of business is more profits, more markets, more products and so on. More, more, more. But the planet has an ecological limit of how much we can take. You’ve seen the Pope’s encyclical—the Pope’s coming out very strong, rightly so, with a deep historical analysis critiquing overconsumption and inequality.

And let’s be fair, the problem we have in the world is not that everybody’s over-consuming, it’s that some people, the so-called 1 percent, are consuming so much that there’s such serious under-consumption amongst the poorest people in the world. And those are the people that are paying the first and most brutal price in terms of climate impacts now. Even though they have been so relatively innocent in terms of the accumulation of carbon in the atmosphere.

GroundTruth: We’ve been hearing so much optimism about this moment [COP21].  Are you buying this? Is this as historic a moment as it’s being portrayed?

Naidoo: It is an historic moment in one sense. Twenty-five years ago when organizations like Greenpeace started talking about we need to act on climate, they were laughed out as alarmists, drama queens. It was a whole range of environmental organizations. What’s different about the moment today is nobody’s talking about the science.

The current status quo is far too contaminated and broken, and if we think we’re going to avert catastrophic climate change by rearranging the deck chairs on the Titanic while it’s sinking, we are kidding ourselves. What is needed is a fundamental systemic and transformational change, and that includes challenging the dominant socioeconomic paradigm.